The mayor of a village in northeastern British Columbia says she is sorry for an online post that was not meant to be racist against Indigenous Peoples, but now she wants people to stop bullying her.

Lorraine Michetti, who was first elected in Pouce Coupe in 2016, said through tears Thursday that she realizes people were hurt after seeing the post showing photos of garbage-strewn lawns with a caption that suggested those who want to protect their land from pipelines should clean up their own backyards.

Michetti said she put the post on Facebook about two years ago and took it down about 10 minutes later but it was saved by someone and she believes it would resurface. 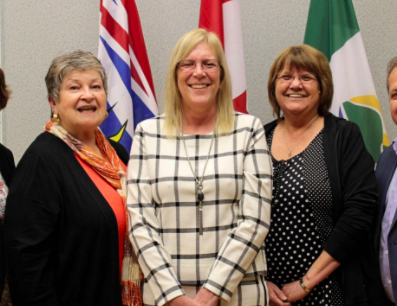 Instead, the mayor said she reposted the original herself last week and that it was meant to draw attention to environmental issues though she now understands its contents were offensive to some people. She said she has issued apologies to local First Nations.

“I realized that they’re hurting but I never, ever, ever meant it to be racist,” she said.

Michetti said she is hoping to take cultural sensitivity courses, which would send a clear message to First Nations and her council that she is making efforts to come to terms with her actions, even as local residents continue criticizing her.

“I’m trying. Let me prove myself. Why are people texting me and messaging me and degrading me and bullying me?”

The post was taken out of context, she said.

At a council meeting on Monday, the mayor also admitted she sent a Facebook post in which she suggested federal gun control laws make her feel like a Jew “waiting for my cattle car.”

As Coun. Ken Drover began asking her about likening herself to a Jew waiting to go to a gas chamber, Michetti cut him off.

“Once they take our guns away, back when Hitler, that’s what it was all about,” she told council.

“That is a terrible, terrible, comparison. How dare you compare yourself to a Jewish person? There is no comparison. That comparison is inexcusable,” Drover said.

“I realize that, Ken, but that again was taken out of context,” Michetti responded.

She also said she would not step down as mayor, adding: “I got emails coming out of my yingyang for me not to resign, from all over Canada.”

Drover resigned from his position on Wednesday.

“I want to be clear that anti-Indigenous racism and anti-Semitism require us to all come together and challenge inequities and we have no space for these actions in our communities,” she said at a news conference on infrastructure spending.

“We expect all elected officials to act with integrity and with respect. They must explain their choices and be accountable to their community.”

Osborne said the province is working to update legislation regarding municipal politicians.

Pouce Coupe introduced a code of conduct in 2018, and at an emergency meeting last weekend councillors accused Michetti of violating it.

However, he suggested that without any provincial legislation that includes consequences, he suspects the issue will result in a “stalemate” between the mayor and the three remaining councillors.

“They have stated that they would like to see her resign. But at the end of the day, it looks like it’s up to the mayor to resign.”