According to the Delta Police, one officer’s decision to station himself in the backstreets of Ladner positioned him in the right place, right time to save a man’s life.

The officer – a junior member in the department – was writing paperwork in his vehicle at the corner of 28th Ave and 53rd Street, just before 1 am on Jan. 16. 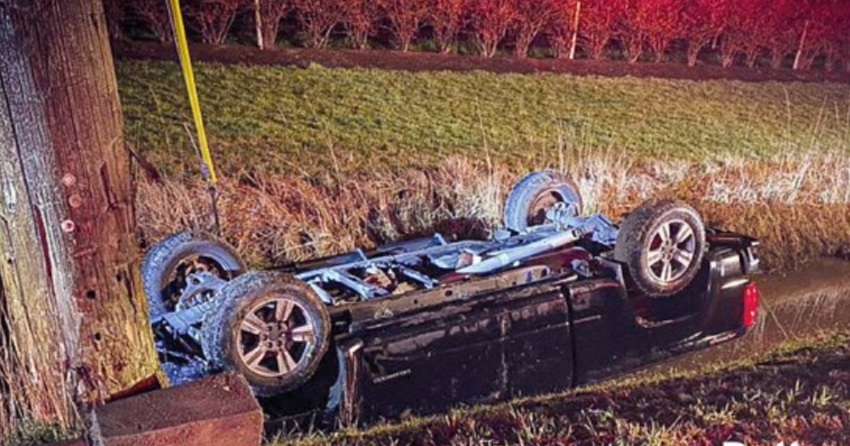 Out of the corner of his eye he spotted a moving light from a farm field to the east in the 5600 block of 28th Avenue.

He thought it might be a flashlight in the blueberry fields, and decided to investigate.

Instead of a person cutting through the fields, he came across a black pickup truck overturned in the ditch. Roads in that area have steep ditches on either side, as it is a farming area.

The vehicle was in about three to four feet of water and the front cab was completely submerged.

“Without hesitation the constable entered the frigid water to see if there was anyone in the truck,” said the department.

The officer was able to hear a banging noise from inside the cab. He immediately radioed for help, and began trying to break the driver’s side window.

“He was able to partially extract the upper half of the driver’s body, while water was flooding in through the window,” says Acting Deputy Chief Harj Sidhu.

Once other police and Delta Firefighters arrived, the man was able to be fully pulled out, and was transferred to a waiting ambulance for observation.

The driver did not appear to suffer significant injuries, but was taken to hospital for examination.

“It is wonderful to see that when faced with a rapidly developing situation, our constable stepped up and made a quick decision to help, risking his own safety. He went above and beyond, and likely saved the driver’s life,” says A/Deputy Sidhu. “He was definitely in the right place at the right time.”

Police added that alcohol was not believed to be a factor in the crash.

Mon
8℃
Make Homepage Advertise with Us

‘I was yelling and swearing’: Pure shock for BC woman after $637K lotto win

BC reports 1,478 new COVID cases over the weekend, confirms all eligible residents will receive vaccination before August