Fall floods, summer heat in BC in line with climate change: meteorologist

Armel Castellan, a warning preparedness meteorologist with Environment and Climate Change Canada, said fall’s floods on the heels of summer’s extreme heat is in line with expected trends.

"Unfortunately, this is consistent with what climate change has been projecting for all parts of Canada, including the mid−latitudes here in BC," he told a news conference Wednesday.

"It’s not to say it’s always going to be this extreme all the time, we will see lulls, of course. But the frequency, amplitude of these events, and their longevity individually, will continue to increase with the coming years and decades."

November saw unprecedented rainfall in places like Abbotsford, which shattered previous monthly records by about 99 millimetres. Weather stations in Nanaimo, Victoria, Abbotsford and at Vancouver’s airport all broke seasonal precipitation records for September, October and November combined, he said. 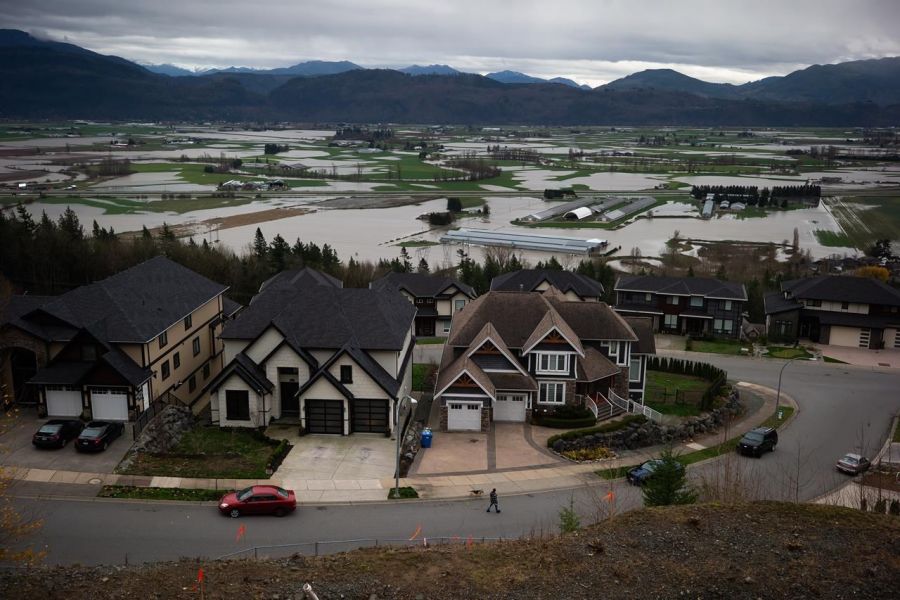 Temperature records were also broken Wednesday and Castellan said they could exceed records for December.

The high−elevation heat is particularly problematic because the snowpack is thin, which means it melts more easily, adding to runoff, he said. However, La Nina — cooler than normal waters in parts of the Pacific Ocean — should bolster the snowpack beginning in January, he added.

Anticipated snowmelt was one of the reasons the District of Hope placed 114 properties along the Coquihalla River on evacuation alert Tuesday.

On Wednesday, the Coquihalla was one of several major waterways where the River Forecast Centre upgraded flood watches to warnings, meaning that river levels have exceeded their banks or will exceed them imminently, causing flooding of adjacent areas.

Flood warnings were also issued for the Chilliwack River, the Lower Fraser tributaries and the Tulameen, Similkameen, Coldwater and Lower Nicola rivers, as well as Spius Creek.

Rivers were expected to rise throughout the day and the centre warned that conditions were changing rapidly.

The flood warnings come as southern and coastal British Columbia entered the tail end of severe weather that meteorologists have described as a "parade" of storms with dozens of weather warnings in place across the region.

There were four dozen evacuation orders in communities in southern BC due to floods and another 11 orders because of landslides.

Some of the new orders issued Wednesday covered about 40 properties near the community of Birken due to a landslide hazard.

There are 12 evacuation orders involving 350 homes in the Fraser Valley Regional District in its coverage area from Boston Bar to Abbotsford. Another 1,664 homes are on alert, most of them in Hatzic Valley where numerous rivers and streams are at or near overflowing.

Near Agassiz, a debris slide temporarily closed traffic on Highway 7, which is the same artery where motorists were trapped between two mudslides last month.

A mudslide also disrupted the commute home for some people Wednesday night on Canadian Pacific tracks that left the West Coast express train unable to travel east of Maple Meadows.

Public Safety Minister Mike Farnworth said the province is doing everything it can to make sure people and communities have the resources and support they need.

He said uncertainty and anxiety are common during such an extremely challenging time and he urged anyone who is struggling to use publicly available mental health supports.

While there was a lull in the weather Wednesday, Farnworth encouraged residents of southwestern BC to prepare for more rain before an expected reprieve Thursday.

Dave Campbell of the River Forecast Centre said additional rainfall could see higher flows on several rivers throughout the day.

The central coast has seen moderate river rises, as expected, while rivers were rising rapidly in Howe Sound and in parts of the Fraser Valley, he said.

The risk of additional flooding in Abbotsford due to spillover from the Nooksack River across the US border was reduced Wednesday, he added.

Abbotsford Mayor Henry Braun suggested conditions had stabilized in one of the hardest−hit areas of the province, although officials would be keeping a close eye overnight and localized evacuation orders remained in place.

"If the weather continues to co−operate over the next few days, we hope to be able to start lifting these and potentially other evacuation orders in areas as they become clear," he said.

The city had 540 mm of rain in the month of November, about one−third of its total annual rainfall, he said.

Flood watches were in effect for the central coast, south coasts and Vancouver Island.

Environment Canada says the rain should ease on Thursday and Friday, but a smaller storm system is expected to affect the south coast late on Friday.

Trans Mountain Corp. said its pipeline is "only a few days away" from restarting following a precautionary shutdown on Nov. 14.

The company said in an update that the latest round of rain and snowfall has not caused any new concerns for the integrity of the 1,150−kilometre pipeline, which carries 300,000 barrels of petroleum products a day from Alberta to BC.

BC has imposed gas rationing because of the pipeline closure. Many residents in southern parts of the province have been told to limit each fuel purchase to 30 litres.

Sat
-1℃
Make Homepage Advertise with Us