Two people who super glued themselves to the Trans Canada Highway in Vancouver had to be removed with solvent by firefighters this morning.

According to a press release sent out today by the activist group Save Old Growth, protesters were at the intersection of Cassiar Connector and Hastings Street during rush hour traffic this morning. 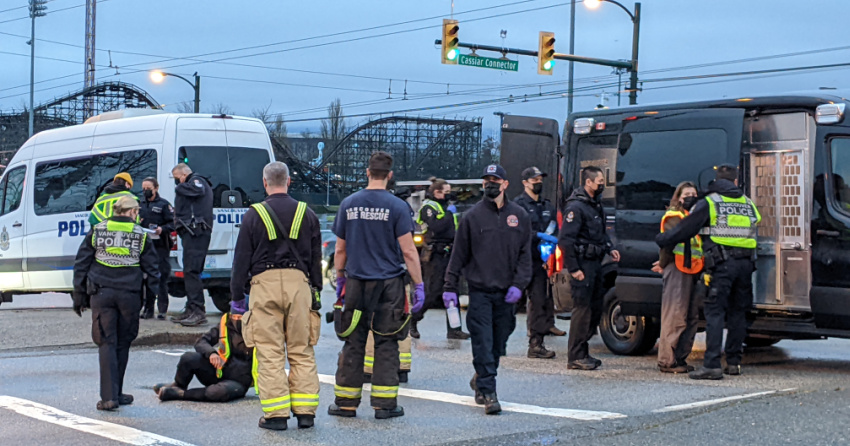 Police arrested four people for disrupting traffic, and discovered that two people had actually super glued themselves to the road.

“I was one of the people superglued to the road, and at first the police did not believe I was actually glued there, so they tried to remove me using force,” said a participant named Julia.

“When they were unable to, they then called the fire department. A fireman came up to me and grabbed my hand and half-ripped it off the ground. I said ‘Ow stop’ and the fireman said ‘Well what am I supposed to do?’ He had the solvent in his hand, and only then decided to use it. He then poured it all over my arm and leg, barely hitting my hand, and then proceeded to forcefully rip my superglued hand off the highway, saying to me ‘That's what you get.’”

"We don’t want people being forcibly and painfully removed by police and the fire department, but we know this is something we have to do,” said an organizer of the protest named Olivia.

“The government is not only complicit, but responsible for the horrors that humanity has and will face because of the climate crisis. We have no choice but to sit on the road and force them to do otherwise.”