In light of the 215 children’s remains being discovered at the Kamloops Indian Residential School (KIRS) on May 28, immense forms of support have been directed towards the Indigenous community of Canada.

Indigenous communities across Canada have been participating in walks, candle light vigils and other grieving ceremonies.

Citizens have been calling for apologies from governmental officials. The Prime Minister requested that the catholic church apologize to the Indigenous peoples of Canada.

Now, a petition is calling for a statue of Pierre Elliott Trudeau to be removed. 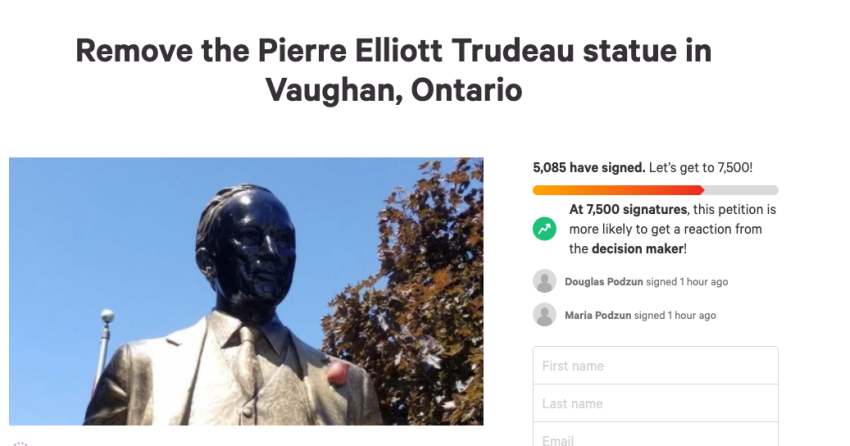 The statue is located in Vaughan, Ont., and commemorates Pierre Trudeau’s time as prime minister, from 1968 to 1984.

However, Slapinski claims that the Prime Minister's two terms coincide with the time that the Kamloops Indian Residential School was in operation, which was from 1893 to 1978.

Slapinski claims that "Pierre Trudeau was reported to have written an anti-Semitic play when he was un university. It is time to stand up to symbols of racism and hate. The statute ... should be removed from Vaughan park."

Although some may have seen Pierre Trudeau as a mark of liberalism, the statue was defaced last August.

One was moved from its position in a park in Kingston, Ont. today and will be moved to the Kingston Cataraqui Cemetery, where Macdonald was buried.

Another statue of the John A. Macdonald was removed from a downtown corner in Charlottetown, PEI earlier this month after a city council vote.

The statue of Egerton Ryerson in Toronto was also taken down by protestors earlier in June.

Closure on Hwy 1 east of Golden starts Monday at noon

BC drivers have until Saturday to get their winter tires installed

Barenaked Ladies announce stop in the Okanagan for holiday tour