BC Traffic Service officers likely got a bit more than they bargained for during a recent traffic stop in the Kootenay region.

On Dec. 5, officers stopped a pickup/trailer combination on Highway 3 near Salmo, BC, for a suspected driver’s licence infraction.

"Upon speaking with the two men in the pickup, an officer formed sufficient grounds to arrest both men for Possession for the Purpose of Trafficking," Cpl. Mike Halskov said in a press release.

"A subsequent search of the pickup and trailer yielded over 350 pounds of cannabis in vacuum-sealed bags." 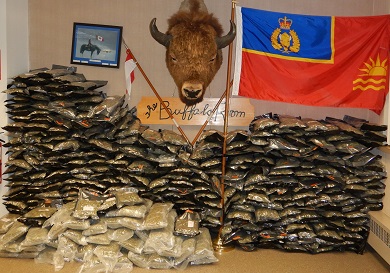 The pickup and trailer have been seized and the men, both from the West Kootenays, were released on a Promise to Appear for a future court date as the investigation continues.

Police are using the incident to remind Canadians that while cannabis possession, production, distribution and sale has been legalized, the quantity, the manner in which it is packaged, the way it may be distributed and sold remains strictly regulated by law.