UPDATE: effective as of 7:00 p.m. Wednesday evening, the evacuation order for all areas within the Rock Creek/Westbridge fire zones has been rescinded; however, an evacuation alert remains in effect.

The Highway 33 corridor remains closed indefinitely, but local residents will be permitted to pass.

The BC Wildfire Service says the wildfire burning near Rock Creek is more than 4,000 hectares in size, but it is now 25 per cent contained.

According to Fire Information Officer Mike McCulley, the fire is larger due to new growth on the southeast flank of the fire. Over the next few days, different aircraft including air tankers will be supporting control lines. This fire is still producing heavy smoke, which may hinder aircraft operations on Wednesday. The fire was first discovered on Thursday, August 13th and has ballooned to 4,013 hectares in size. 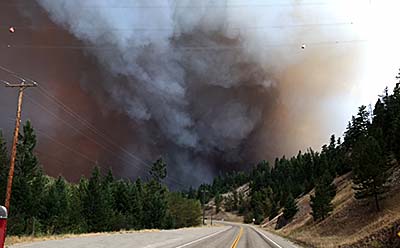 The Regional District of Kootenay Boundary has completed an assessment of damage in the area and has confirmed that 30 homes and an additional 15 structures have been damaged or destroyed. The wildfire is suspected to be human-caused, but it is still under investigation.

A section of Highway 33 has been closed due to this incident. For more information on these closures, please visit: http://www.drivebc.ca.