A billboard in West Kelowna has sparked an unusual conversation by comparing abortion to animal cruelty.

The Kelowna Right to Life Society put the billboard up along Highway 97 in West Kelowna following an anonymous donation. The billboard juxtaposes the killing of a puppy as “cruelty” and the unborn baby as a “choice.”

According to the Society, the billboard has attracted the attention of activists in complaints to Advertising Standard Canada (ASC).

“Several local abortion advocates attempted to have the billboard removed using the ASC mechanism; complaining that the Kelowna Right to Life Society was being dishonest in calling the unborn child depicted in the ad a ‘baby,'” the Society said in a prepared release. “The complainants also claimed that the ad violates the section of the Advertising Code prohibiting ads that display ‘unacceptable depictions and portrayals’ of persons or groups.” 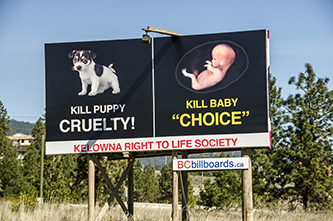 In a public statement, the Society said it has responded to the complaints by pointing to provincial and government publications that depict unborn babies. Such as pamphlets on the danger of drinking and smoking while pregnant.

Kelowna Right to Life objected that the complaints originated from their competitors, something that is not permitted under ASC procedures.

According to Janet Feasby, vice-president of standards, the ASC received 10 complaints about the billboard.

“The ASC has determined that there was not, based on precedence, there is not an issue under the code for adjudication by the council,” Feasby said.

The complaints against the Right to Life billboard did not proceed to council, Feasby said.

"We see this as a major victory for the pro-life movement, not only in terms of respecting freedom of expression but also for the march toward achieving protection for the unborn,” said Right to Life executive director Marlon Bartram.

When a complaint about advertising is submitted to the ASC, staff review the complaint against relevant regulatory code and if there is an issue, the ASC will ask the advertiser to submit comments on the complaint. Then the ASC will look at the response and the matter will either be resolved or it will go on to the council for adjudication.

The billboard will be up near Grizzly Road and Highway 97 until March 2017.