Hundreds in the Okanagan without power after windstorm knocks trees down

There are a number of power outages reported in West Kelowna and Lake Country as a tree has come down on power lines.

According to BC Hydro, more than 1,400 people are without power in Lake Country due to a tree across wires. The tree came down during the Sunday evening wind storm that blanked the Okanagan and the power has been off in this area since 8 p.m. 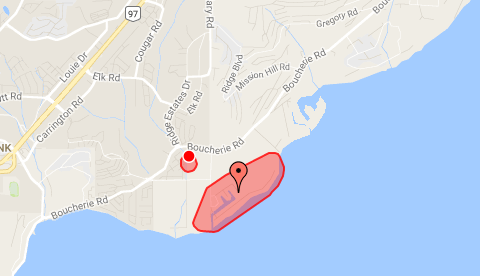 In West Kelowna, a pole replacement is causing outages for about 300 people east of Hitchner Road and south of Bourcherie Road. The power is expected to be restored by 10 a.m. as crews are currently on site.

Another 150 people north of Rose Valley in West Kelowna are without power as a downed tree has knocked out power. Nearly 100 more persons are without power in Westbank, north and south of Westside Road because of a tree on power lines.

All regions of Westside Road, including Bear Creek Park and side roads are also without power due to the wildfire. An estimated 1,600 people are in the dark and will remain that way until BC Hydro gives the ‘all clear’ to re-energize the lines.