A West Kelowna man is in hospital recovering from serious injuries after a hit and run over the weekend.

His dog was hit by the vehicle involved as well and tragically succumbed to its injuries at the scene.

Police say it happened shortly after midnight on Sunday while 35-year-old Matty Rebman was walking in the 1300 block of Hudson Road.

The blue sedan that hit Rebman and his dog did not stop and was later found abandoned a short distance away at the intersection of Hudson Road and Concord Road.

Officers and the police dog unit were on scene almost immediately and conducted a search at the abandoned vehicle, but were unable to find the driver.

The vehicle has now been seized as police continue to investigate the hit and run.

A friend of Rebman's took to the popular Kelowna Alert Facebook page in an attempt to try and identify the driver responsible.

He said that the 35-year-old is suffering from a broken leg, as well as fractures to his ribs, neck and back.

He also shared a photo that Rebman posted to his Instagram story, which shows him in hospital and says, "to the guy who hit me with their car and killed my best friend, please turn yourself in." 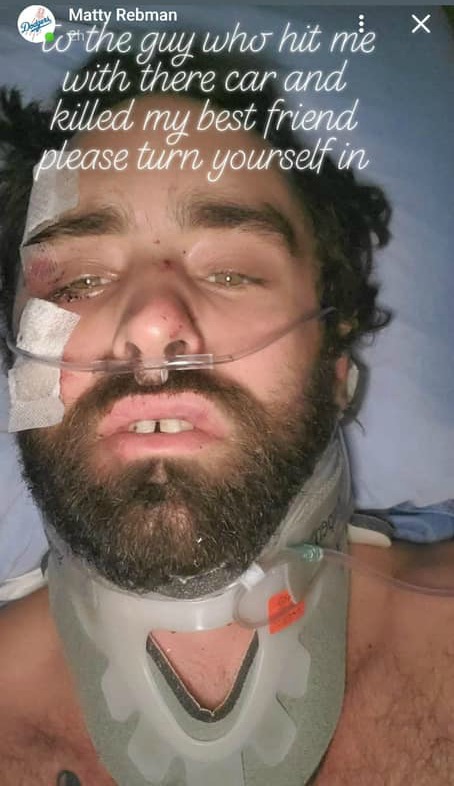 “We are now encouraging anyone who witnessed the collision unfold to contact police immediately with your information,” said Cpl. Jocelyn Noseworthy.

“Furthermore, if any motorist has any dash camera footage, or homeowner with surveillance video of the event, they are urged to contact the West Kelowna RCMP immediately.”

Noseworthy added that the RCMP commends the members of the public who stopped to provide assistance to Rebman while he laid in the road.

Anyone who witnessed the collision is asked to call the West Kelowna RCMP at 250-768-2880.