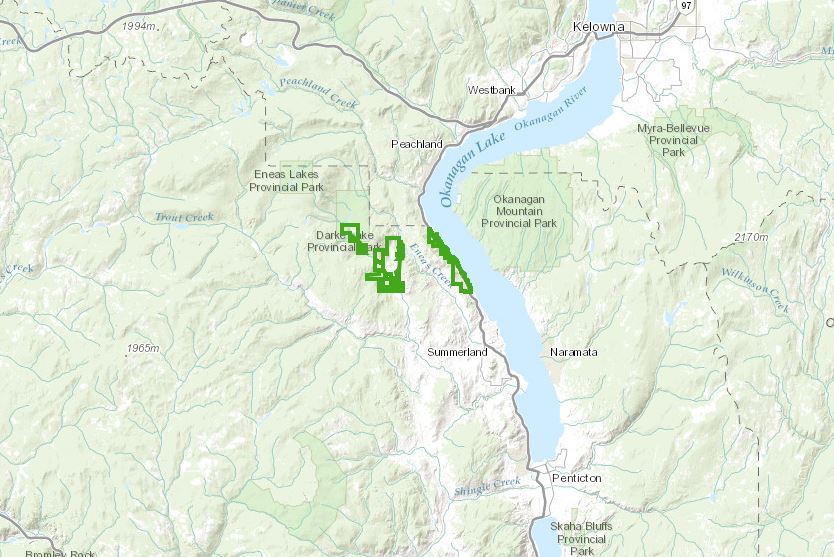 All Evacuation Alerts are rescinded for 698 properties in Peachland and in the Central Okanagan West Electoral Area.

The following addresses and streets in Peachland are no longer on Alert:

The following properties in the Central Okanagan West Electoral Area are no longer on Alert:

There are currently no properties in the Central Okanagan Regional District on Evacuation Alert or Order.

BC Wildfire Services has advised the Regional District of Okanagan-Similkameen (RDOS) Emergency Operations Centre (RDOS EOC) that the Evacuation Alerts in Area F can also be rescinded.

Therefore, due to the area no longer requiring prompt coordination of action or special regulation of persons or property to protect the health, safety or welfare of people or to limit damage to property the RDOS has removed the State of Local Emergency for Electoral Area F.

The Evacuation Alert has been rescinded for the following addresses in the Okanagan-Similkameen: 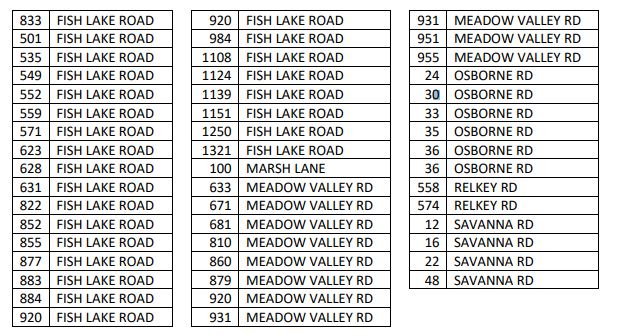 Click here for the latest updates on the Mount Eneas wildfire.

(UPDATE: July 24 @ 9:45 a.m.) - The final evacuation order connected to the Mount Eneas wildfire has been rescinded.

The District of Summerland says that it's safe for residents at 35888 Garnet Valley Road to go home.

It does remain on evacuation alert, as do hundreds of other residents in the area.

The fire remains just under 1,800 hectares and it's staying within containment lines established by the BC Wildfire Service.

Anyone who lives along Garnet Valley Road north of Wildhorse Road, are now allowed to go home, with the exception of 35888 Garney Valley Rd.

Those houses are now on evacuation alert.

Meanwhile, the evacuation alerts on Bridgeman Road and Garnet Valley Road between Jones Flat Road and Wildhorse Road, have been lifted. 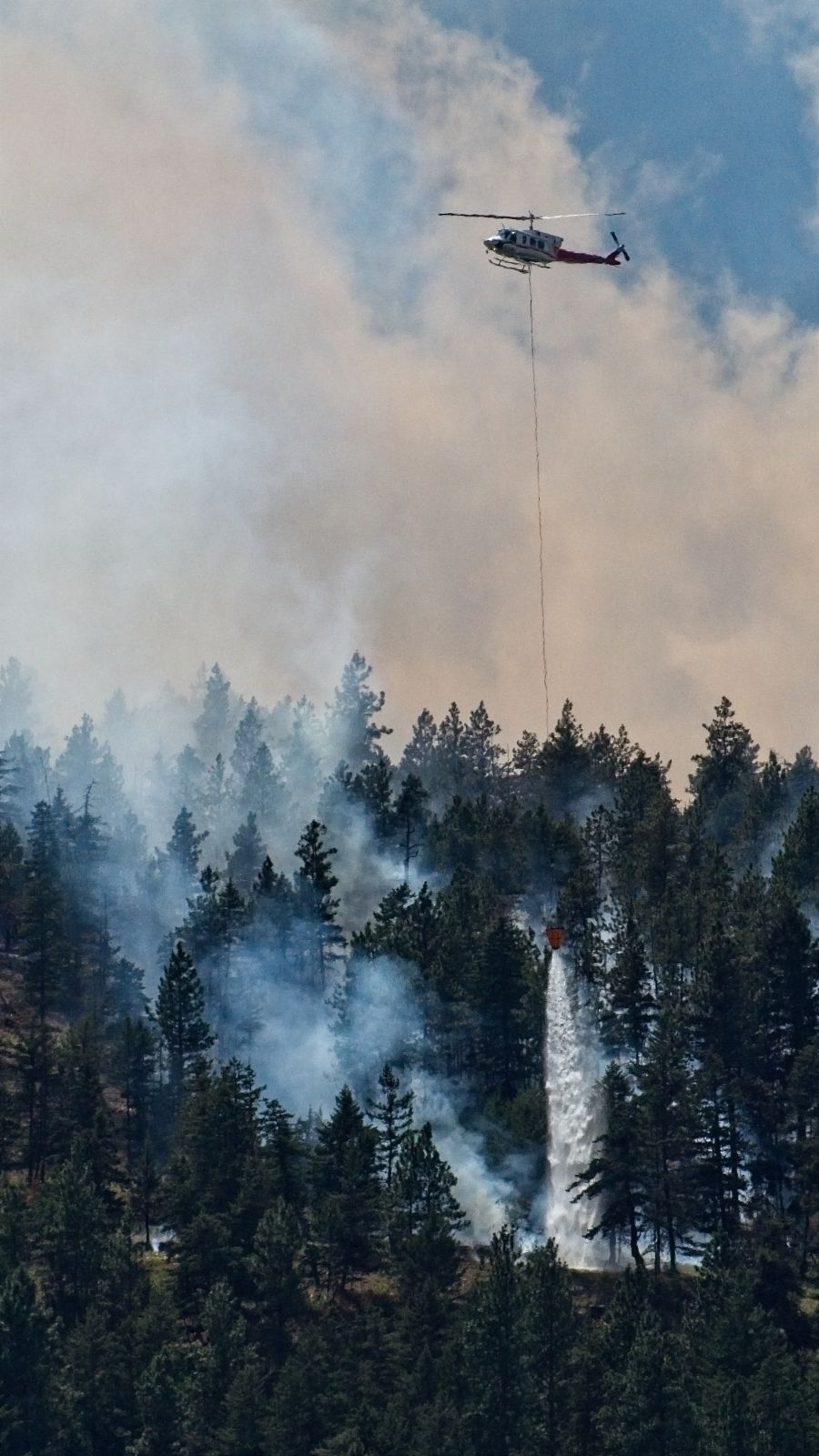 (UPDATE: July 23 @ noon) - An evacuation order for five homes along Hwy 97 has been rescinded.

A release from the RDOS says it's safe for those residents to return home, but they remain on an evacuation alert.

(UPDATE: July 22 @ 3:50 p.m.) - Evacuation Alerts will remain in effect overnight for 698 properties in the Central Okanagan Regional District in the vicinity of the 1,400 hectare Mt. Eneas and the 150 hectare Munro Forest Service Road Wildfires.

BC Wildfire Service crews spent the day conducting planned burning to merge the two fires by expending ground fuels in a controlled fashion while weather conditions remained favourable to do so. While progress was made on all fronts, the combined Mount Eneas wildfire was still considered out of control by mid-Sunday afternoon.

In the Central Okanagan, the following addresses remain on Evacuation Alert:

Crews have started a significant backburn as part of their efforts to contain the fire. This may cause a noticeable increase in the amount of visible smoke from the fire area. This is expected, and BC Wildfire Service and District of Summerland fire department will continue to manage and monitor the situation.

RDOS are continuing to liaise with BC Wildfire to re-assess the risk to those on Evacuation Order.

BC Hydro service has been cut off by the Mount Eneas Wildfire in RDOS Electoral Area “F,” in the vicinity of Faulder and Meadow Valley. Approximately 244 BC Hydro customers are affected by the power outage. When safe to do so, BC Hydro crews will access the area and make plans to repair the damage. Residents without power should be prepared for the outage to continue through the weekend and into early next week.

Crews did see good progress at the Okanagan Complex fires yesterday, although they are still classified as out of control.

For the latest updates on the Mount Eneas wildfire, click here.

(UPDATE: July 21 @ 4:49 p.m.) - The evacuation order implemented to evacuate residences located in the areas known locally as Callan Road, North Beach, Greata Ranch and Okanagan Lake Provincial Park and campground has been rescinded and residents may now return to their homes. 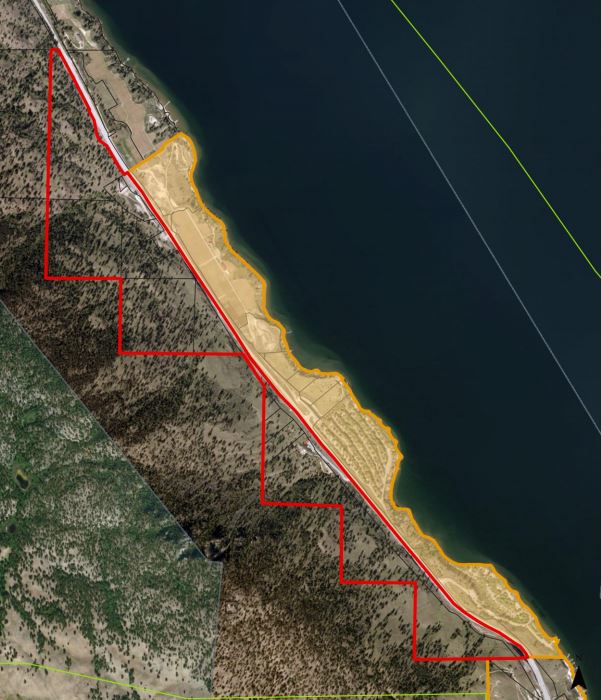 As of 3 p.m. Saturday afternoon, RDOS notified locals north of Summerland that they can return back to their warm, familiar homes, although residents will remain on evacuation alert.

Properties within they Garnet Valley area in the District of Summerland will remain on evacuation order as a result of the Mount Eneas wildfire.

Residents of 38 properties displaced by the Evacuation Order can now return to their homes. However, these residents are reminded that they remain on Evacuation Alert and should still be prepared to leave their homes again with little notice.

The following addresses are now on Evacuation Alert:

Further, the District of Summerland has rescinded the Evacuation Order for 23411 Callan Rd & 25200 Callan Rd. These properties will remain under an Evacuation Alert until further notice.

(UPDATE: July 20 @ 6:00 p.m.) - An evacuation alert for an additional 49 properties in the Regional District of Okanagan Similkameen (RDOS) Electoral "F" area has been implemented, announced the RDOS Emergency Operations Centre.

Several properties in the Meadow Valley Road, Fish Lake Road, Marsh Lane, Osborne Road, Relkey Road and Savanna Road are affected by the Mt. Eneas fire and should prepare to leave if ordered.

The Evacuation Alert has been issued to allow residents in the vicinity of the encroaching fire to prepare to vacate the premises immediately if needed.

Properties that should be prepared to leave at a moment's notice are as follows: 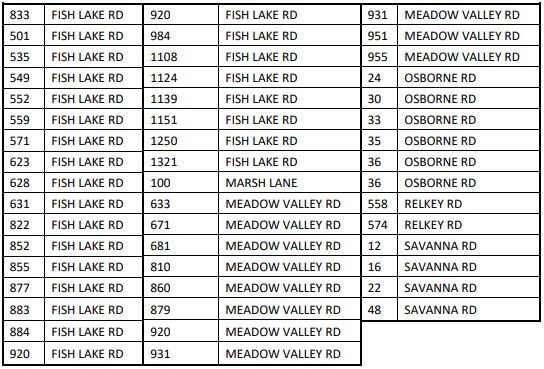 (UPDATE: July 20 @ 11:50 a.m.) - Any campers who were forced from Okanagan Lake Provincial Park on Wednesday will be allowed access to the campground to collect belongings today.

Access will be allowed between noon and 3 p.m. and campers will need to bring two pieces of I.D., as well as check in with the park operator. 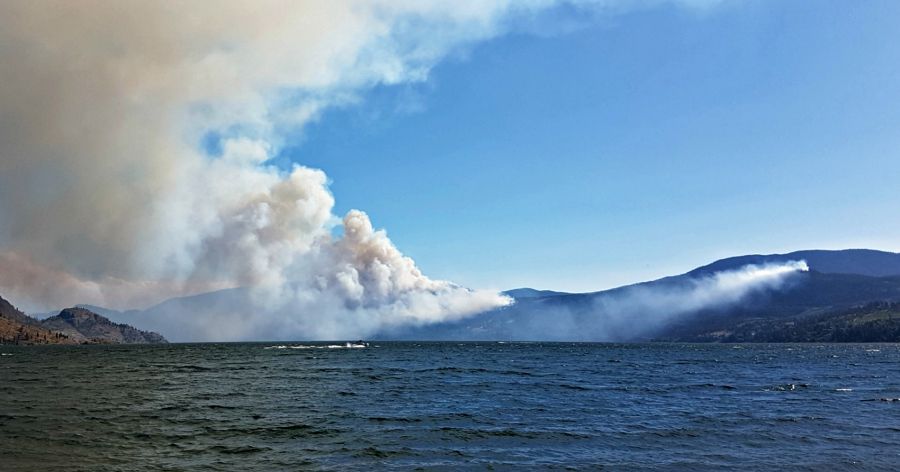 The campground remains under evacuation order due to the Mount Eneas wildfire.

In addition to this news, an evacuation order for three properties affected by the fire has now been changed to an evacuation alert.

Residents living at 303, 305 and 307 Log Chute Rd. can now return to their properties, but must be prepared to leave at a moment's notice.

(UPDATE: July 19 @ 5:12 p.m.) - An Evacuation Alert has been issued for 60 properties in the southern end of Peachland and some properties within the Regional District of Central Okanagan Electoral Area West affected by the Mt. Eneas wildfire.

A detailed map showing all the properties on the Evacuation Alert can be found at cordemergency.ca/map.

Properties affected by the Evacuation Alert within the Electoral Area include:

Properties affected by the Evacuation Alert within the District of Peachland include:

It is estimated approximately 150 people are affected by this alert. All people on evacuation alert should be prepared to leave on short notice if conditions change. Residents in the affected area should be prepared to be away from their homes for an extended period of time, make arrangements for pets and pack essential items such as medicines and important documents. Visit the be prepared page for more information.

The existing evacuation order for Brent Road and Highway 97 South remains in effect.

Click here for a map of orders and alerts.

Click here for updated coverage on the Mount Eneas wildfire.

(UPDATE: July 19 @ 4:40 p.m.) - The District of Summerland has announced another evacuation order for the Mount Eneas wildfire.

All properties along Garnet Valley Road north of, and including, Wildhorse Road have been evacuated.

Residents must leave the area immediately due to the immediate danger from the threat of wildfire. Members of the RCMP will be delivering evacuation notices and assisting with the evacuation.

An Emergency Services Reception Centre has been set up at the Curling Club at the Summerland Area (8820 Jubilee). All affected individuals within the evacuation order area are asked to register at the reception centre. Evacuees electing not to take advantage of emergency social services are still requested to register.

An additional evacuation alert will be issued for Garnet Valley Road - north of, and including, Jones Flat Road to Wildhorse. This alert is being issued to prepare residents to evacuate the premises or property should conditions worsen.

Questions can be directed to the District of Summerland Wildfire Emergency line at 250-486-3765.

(UPDATE: 1:10 p.m.) - Another two properties have been put on evacuation order in Summerland.

Residents of both of these properties are advised to leave the area immediately and there is an Emergency Services Reception Centre set up at Penticton's Memorial Arena (399 Power St.).

The evacuation orders and alerts from Wednesday night and early this morning remain in place, which you can see below.

The evacuations are in response to the Mt. Eneas wildfire, which was last measured at 200 hectares on Tuesday night.

It closed Hwy 97 at one point, but the road is now open to single lane alternating traffic.

(UPDATE: July 19 @ 1 a.m.) - As the Mt. Eneas fire continues to spread, it has forced more homes into evacuation alert.

All properties along Garnet Valley Road, north of and including Wildhorse Road are under an evacuation alert issued by the Corporation of the District of Summerland at the Emergency Operations Centre (EOC) due to the threat of the wildfire as it poses a potential danger to the properties affected.

An Evacuation Alert has been issued to prepare residents to evacuate their premises or property should it be found necessary.

Residents will be given as much advance notice as possible prior to evacuation; however, they may receive limited notice due to the changing conditions.

Residents can prepare for the evacuation order by:

11:36 p.m. Nine properties including all campground sites at Okanagan Lake Provincial Park on Hwy 97 are in the process of being evacuated by first responders due to the Mount Eneas wildfire. The Evacuation Order is in the Greata Ranch area approximately 10 km north of Summerland. BC Wildfire Service, RCMP and BC Parks staff are on the scene. 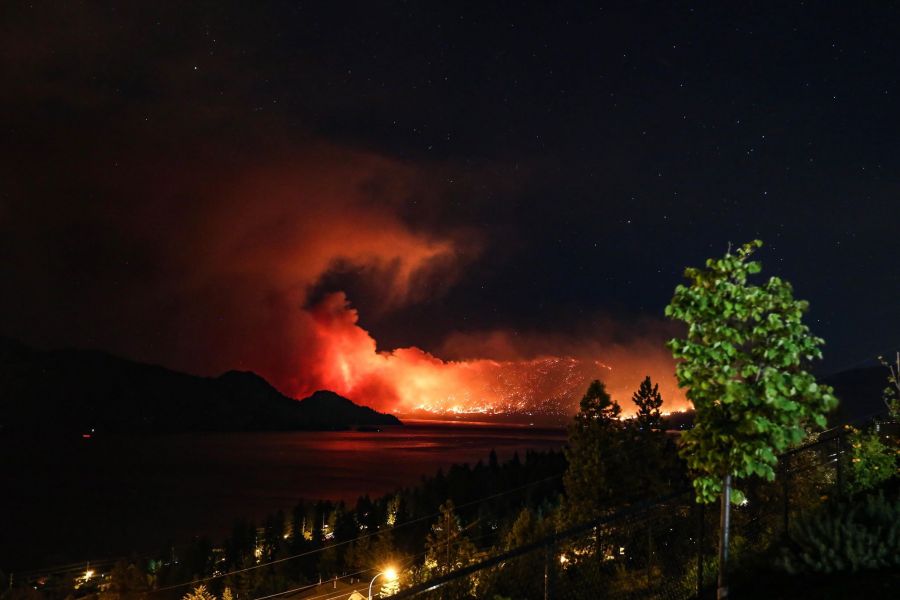 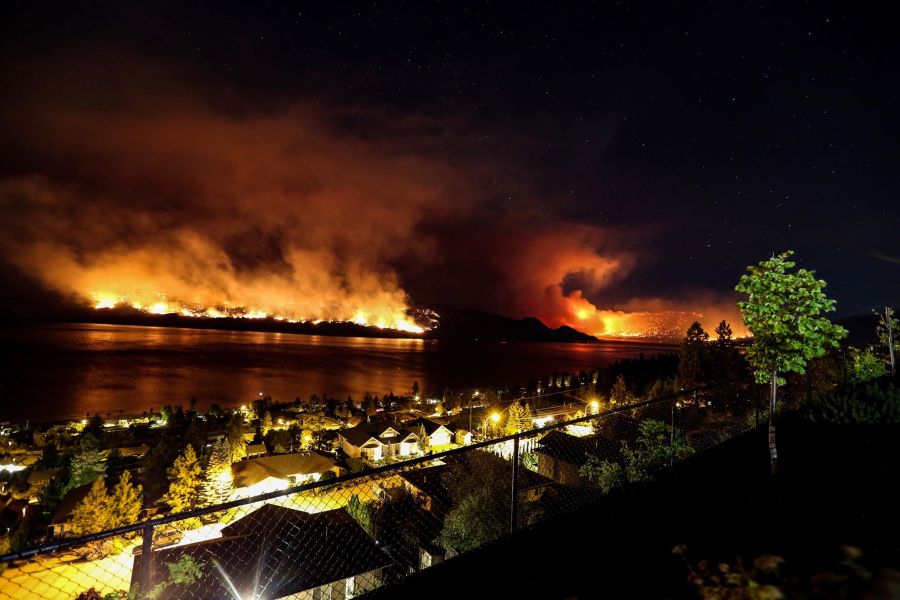 An Emergency Social Services Reception Centre is open at 325 Power St. at the Penticton Community Centre. All affected within the Evacuation Order area are asked to leave immediately and register at the reception centre.

Evacuees electing not to take advantage of Emergency Social Services are still requested to register. 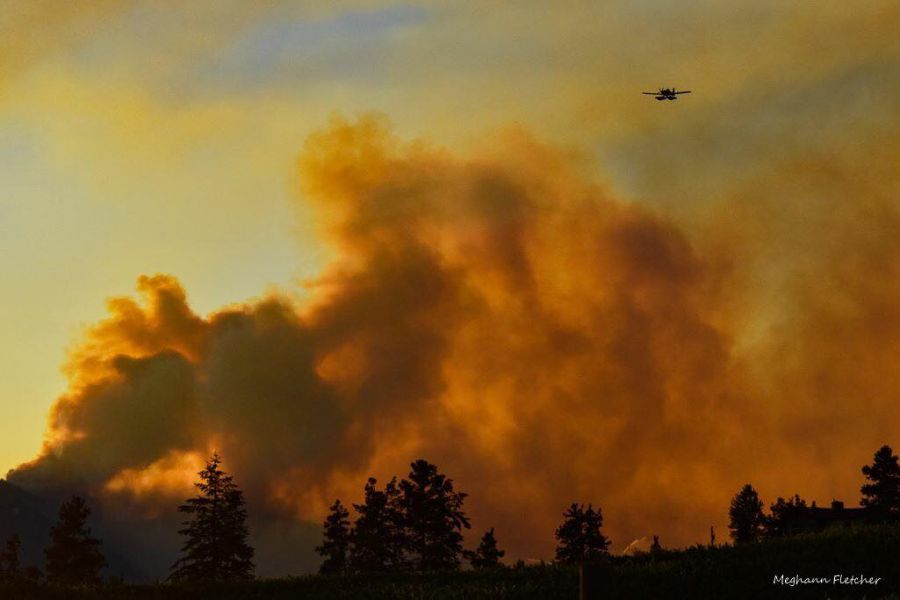 Properties affected by the evacuation order include:

The ordered has been activated to support BC Wildfire Service crews fighting the Mt. Eneas fire south of Peachland. The fire is estimated at 200 hectares. 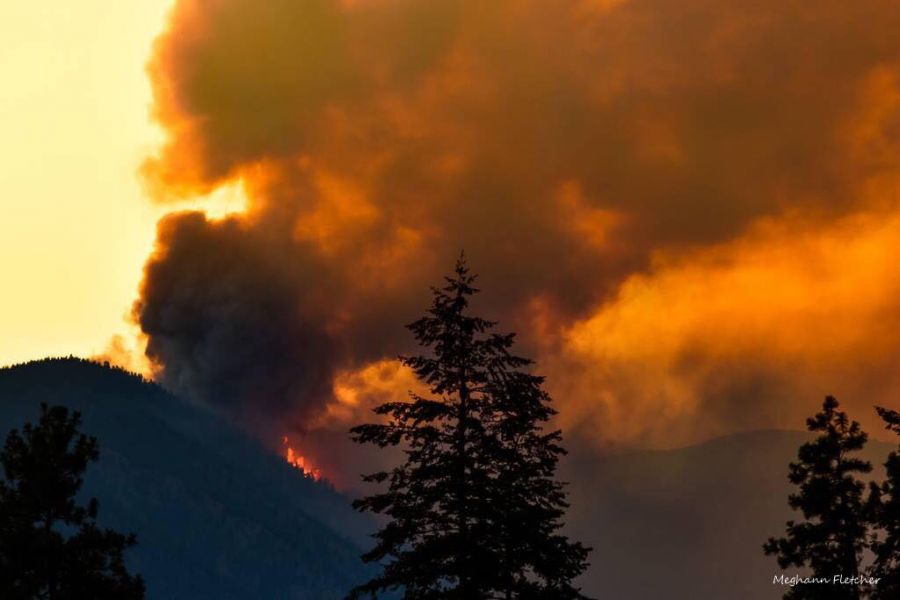 A detailed map is available showing affected properties at cordemergency.ca.

At 7:30 p.m. Hwy 97 was reopened to single lane alternating traffic with RCMP escort.

For more information on properties on evacuation order and alert within the boundaries of the Regional District of Okanagan Similkameen, visit rdos.bc.caopen_in_new. 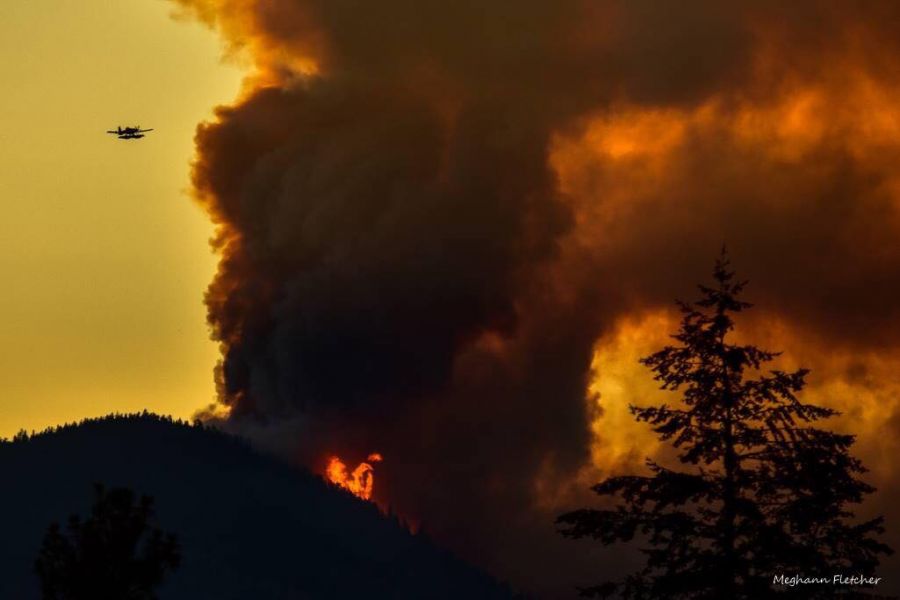 An Emergency Support Services reception centre is being set up at the Lakeview Heights Baptist Church, 2630 Alhambra Drive in West Kelowna.

ESS volunteers will be available starting at 11 p.m. tonight to help affected residents. Residents that are out of their homes must report to the reception centre to receive any assistance and lodging.

New information will be released as soon as it becomes available.