Here are the faces, and the trucks, of those fighting the wildfire ground game

Much of the press to date on the Mount Christie wildfire has focused on the air attack. And for good reason. There are multiple choppers in the air at any one time, occasionally joined by the two massive Conair Convair air tankers that reside at the Penticton airport. 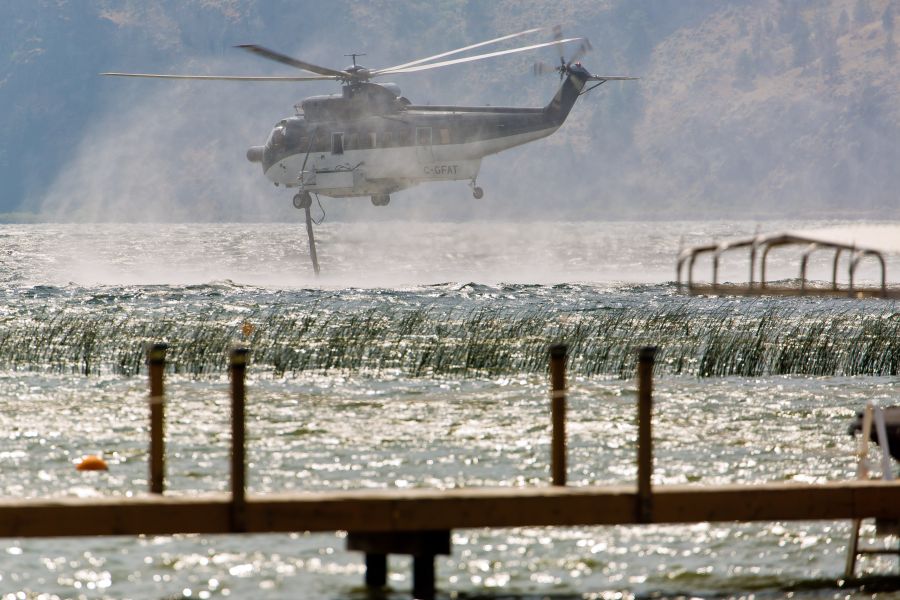 They're highly visible, flying in front of and above the flames and smoke, and they're numerous. Look up at practically any point during the day, and you're likely to see them.

But there's a hugely impressive ground force too. They're toiling behind the roadblocks where few are allowed, and often behind the hills and the escarpments and the bluffs that make up the fire zone. 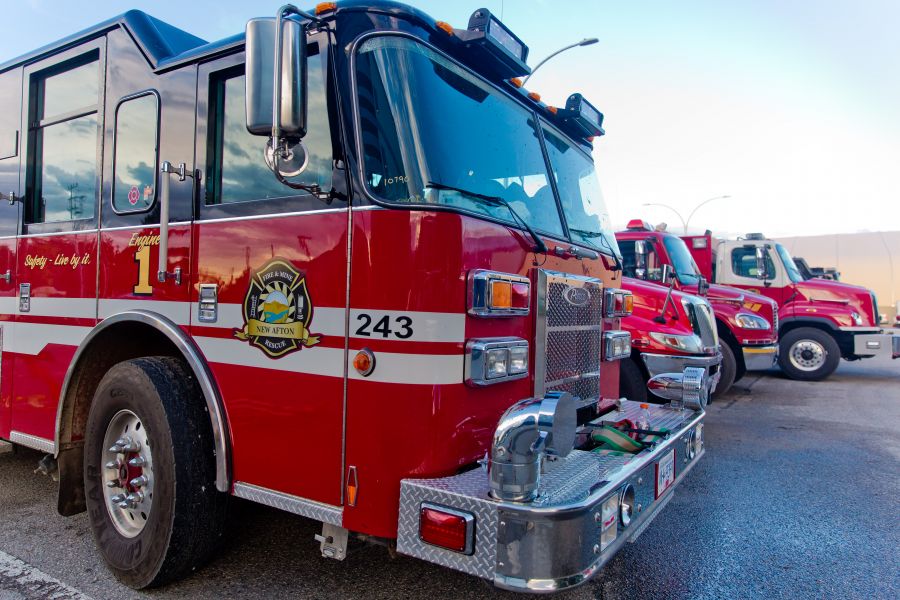 They're generally not seen by the public, but that's simply because they're doing their job like the dedicated experts they are.

Some hail from Penticton, others have been summoned from various spots throughout the province. And PentictonNow got to meet a bunch of them Friday night at the impromptu "Penticton Structure Protection Base" encampment that now exists at King's Park, adjacent to the new Fairfield Inn. 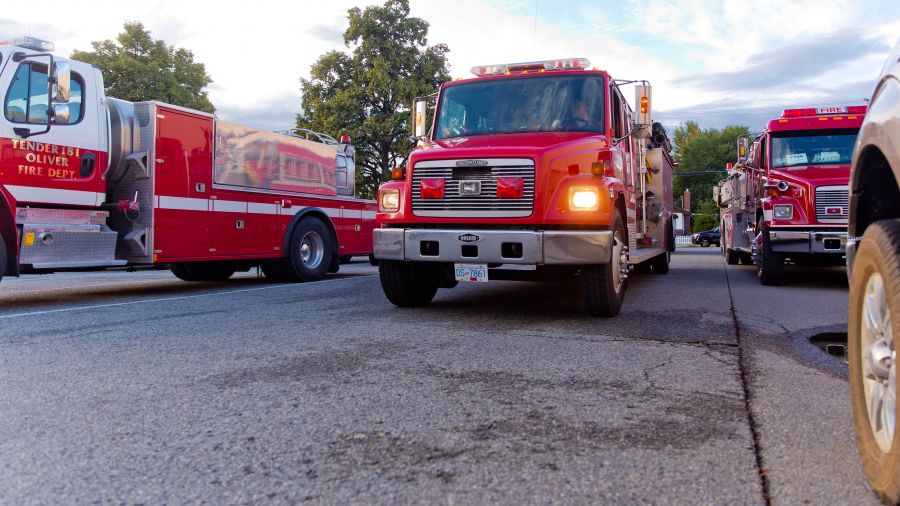 Our goal? To witness the gear that’s been assembled, but more importantly, to see some of the faces of those who serve to keep us safe.

When we arrived at 7 p.m., the camp had already swelled to 140-plus firefighters and 45 to 55 pieces of equipment. It was an extraordinary spectacle. And without fail, everyone we engaged was friendly and eager to get back out there. 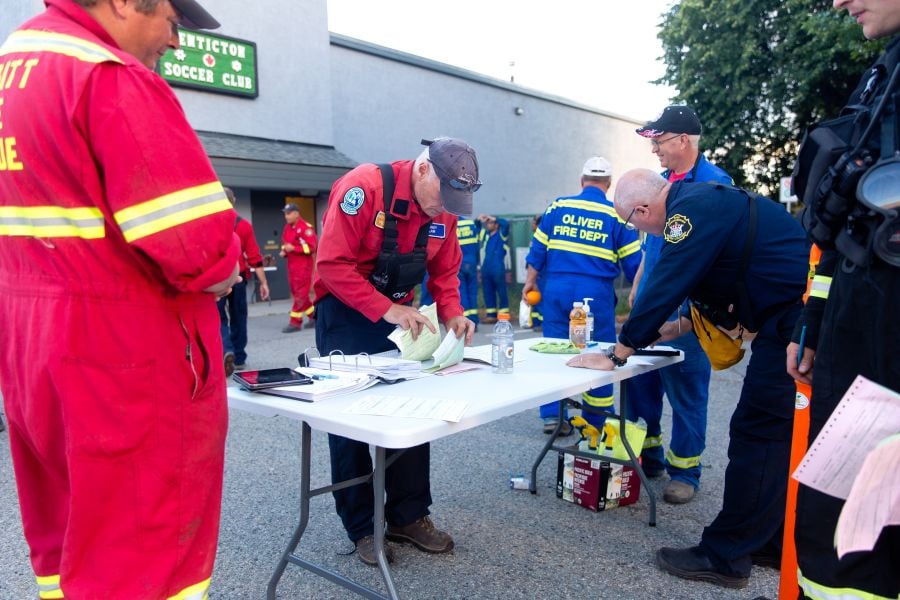 From forestry management firm Seneca Enterprises in Lumby, BC, came a flock of five hard-working young folks, all with lengthy locks that would make even Fabio proud. They'd been battling the blaze Friday, and they expected to be there Saturday too.

And they were downright thrilled to have their photo taken. 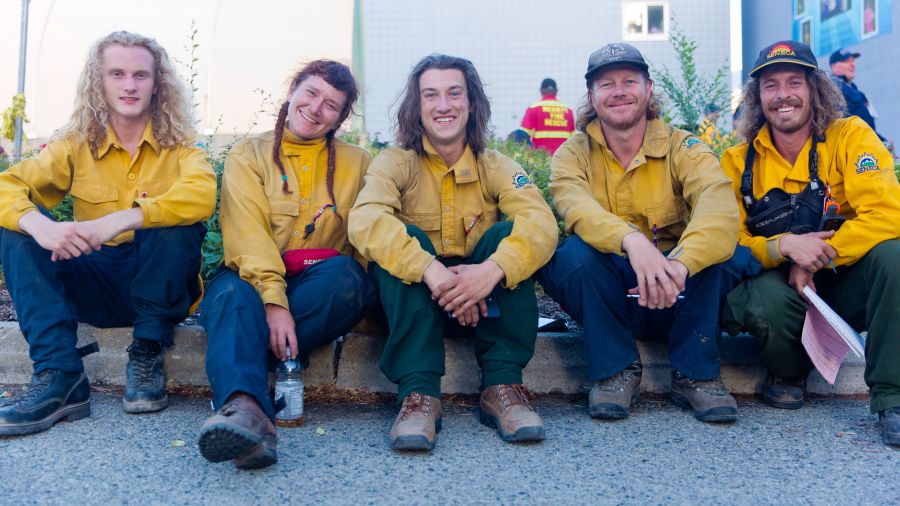 Though they wouldn't/couldn't tell us precisely where they'd been were stationed yesterday, they would say they're all experienced in disciplines such as tree planting, firefighting, and "fuel mitigation projects." And to a person they said that Friday was a "very good day."

Just a few feet away, and still sitting on their truck, were four members of the Vavenby Fire Department.

After explaining to this reporter where Vavenby actually is (it's 20 minutes northeast of Clearwater), spokesperson Chris Janes said they'd arrived on the scene just an hour earlier and were still awaiting their deployment instructions. 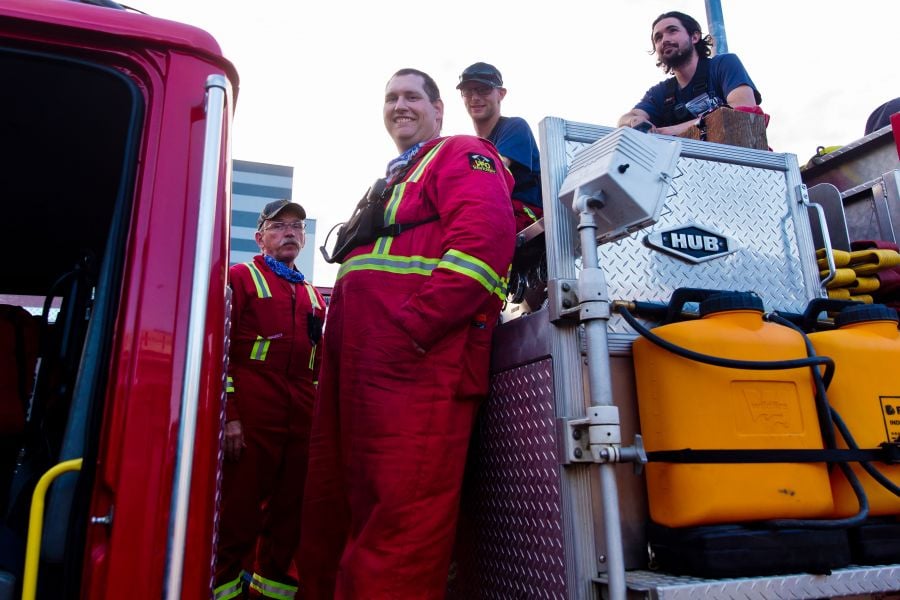 We asked Janes what would happen if something went down in Vavenby while they're here. "We've got another engine and a full crew back home," he assured us.

Out near the Eckhardt exit, we encountered a whole bunch of folks with the Kaleden Volunteer Fire Department. They were in great spirits when we spotted them, and were happy to pose. 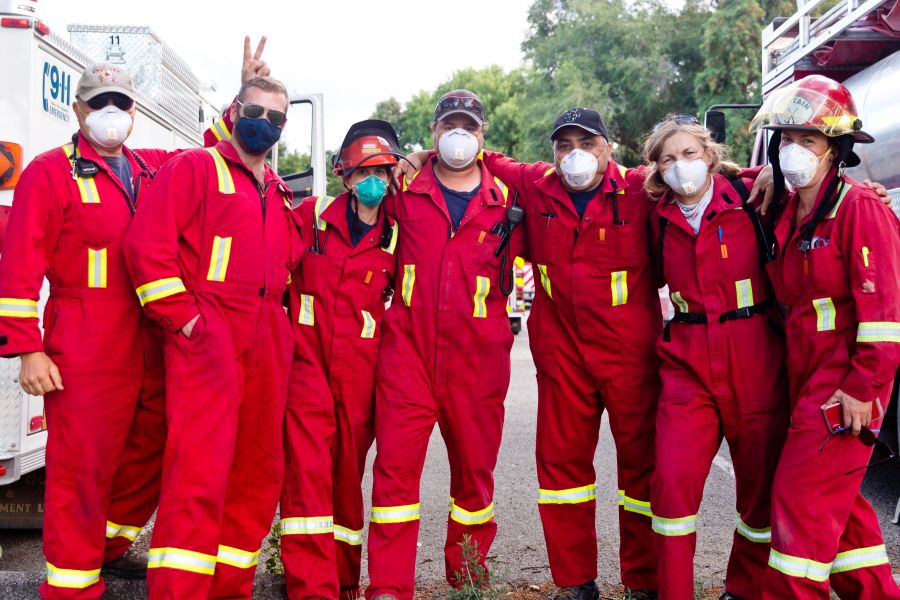 Assistant Chief Tony Madeira said they'd been battling the fire even before being called to the camp. And that's not surprising, given that Kaleden is directly across the lake from many of the hot spots.

According to Madeira, the team hit the camp at 11 a.m. and is working four-person shifts. He laughingly admitted he's "supposed to be tight-lipped," but did say, "Today we went up Carmi (Avenue), and did whatever. Progress was good." 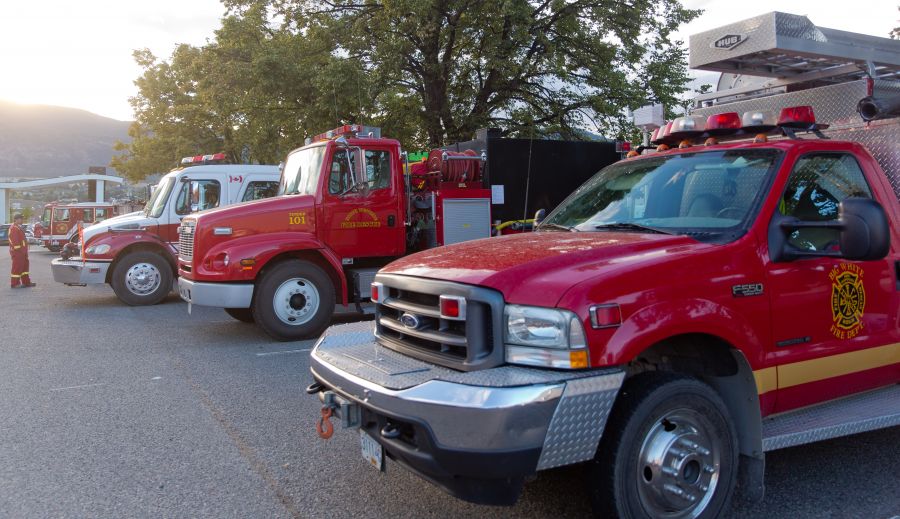 Next up were several familiar faces with the Penticton Fire Department and, looking particularly snazzy in their red jumpsuits, a group from the Naramata Fire Department. 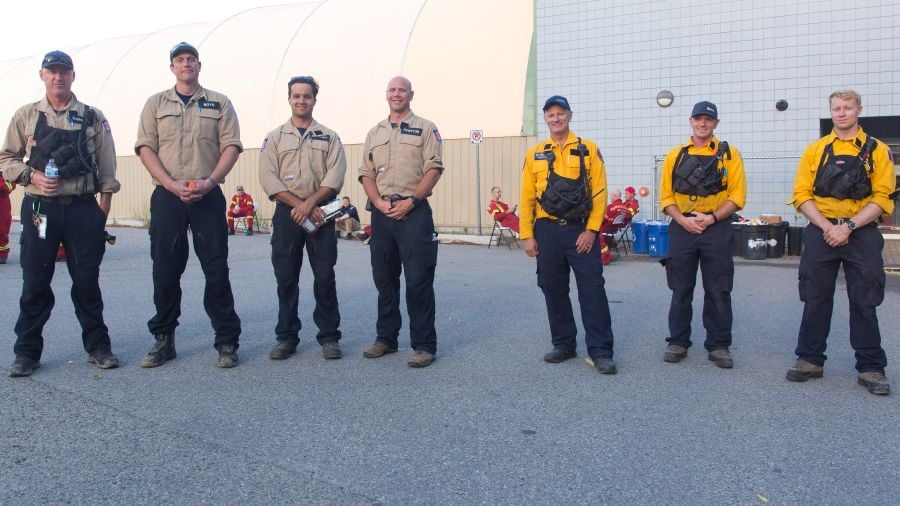 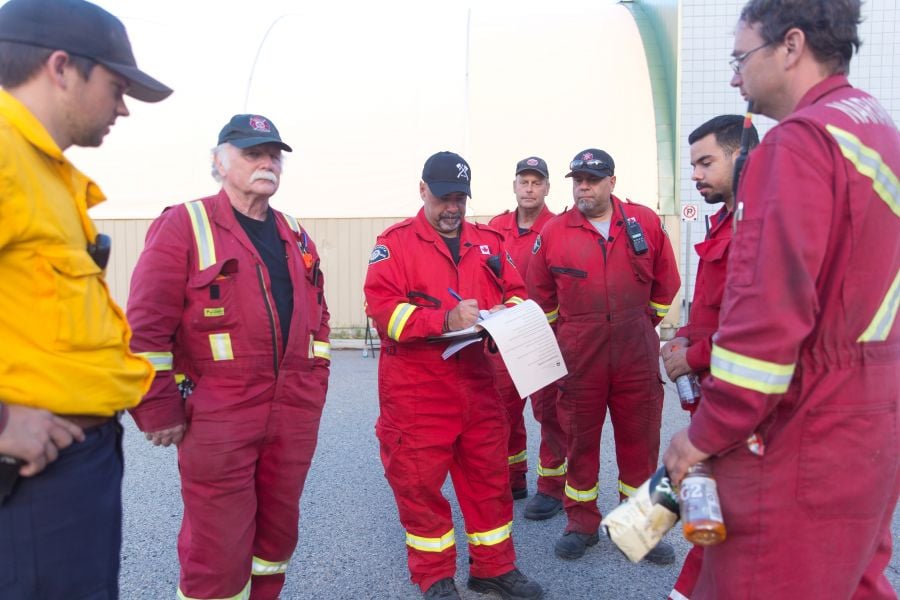 And then it was on to two dudes who apparently make a regular habit of zipping to danger zones throughout the province.

Captain Kevin Woronchak and Matt Ciofli of the District of North Vancouver Fire and Rescue Services are wildfire specialists. They’ve fought blazes from Richmond to Smithers, and they brought their wildland truck with them to Penticton. 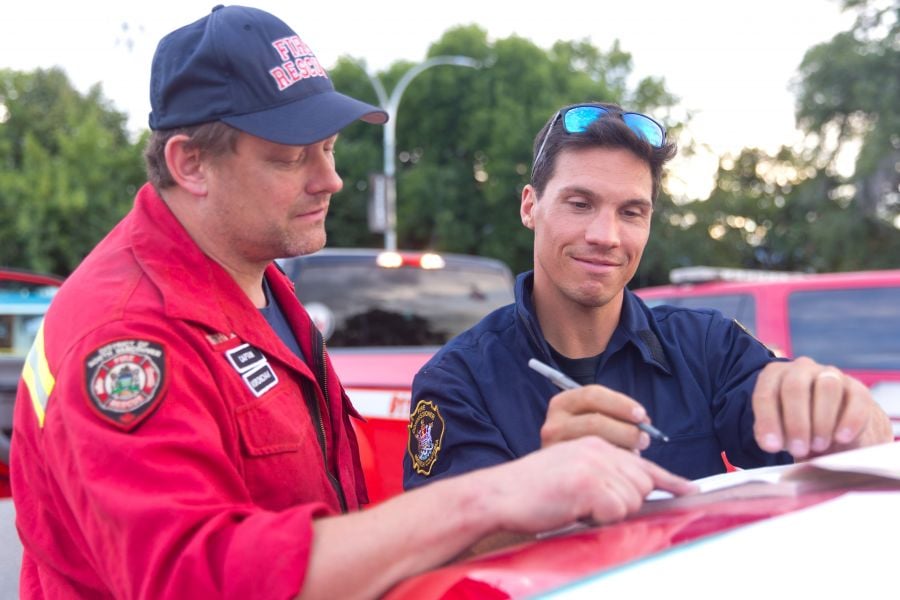 "We operate a unit that can help with this fire," said Woronchak confidently. "We have pumping capability and water on board, and a bunch of equipment to not only provide our own water supply, but also to do structure protection on the houses we need to do. And that's what we did today."

Woronchak and Ciofli arrived at the ridiculous hour of 1 a.m. Friday morning, and had already completed a 12-hour shift by the time we spoke, focusing primarily on structure risk assessment in an area stretching from Upper Carmi to Beaverdell. 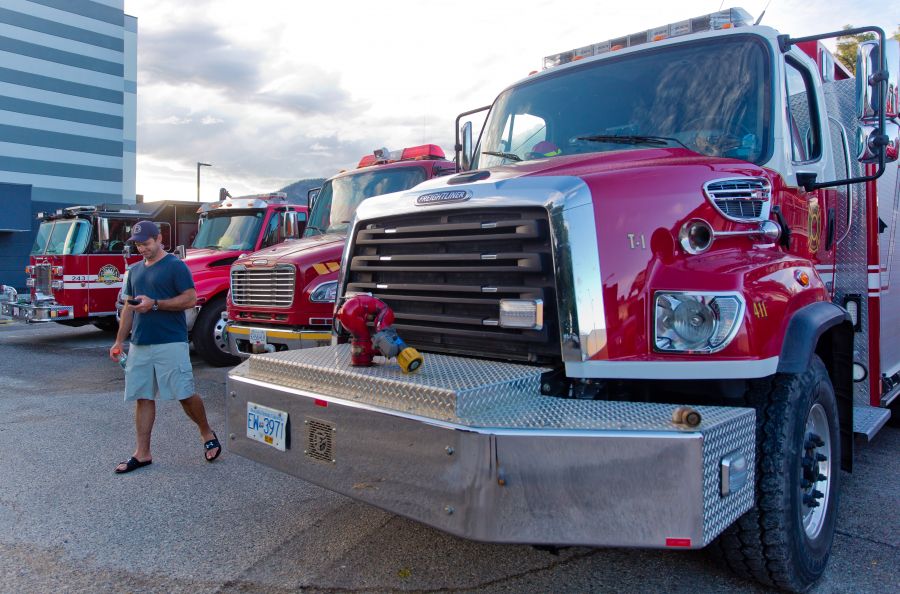 "It was very hot and very windy today," continued Woronchak. "We were worried about the fire activity, but hopefully things have calmed down now."

Penticton's firefighter camp will exist until it's no longer needed. And we all hope that's sooner rather than later. But in the meantime, it's good to know, and remember, all the talent and all the hard labour pouring into the Mount Christie wildfire ground game. 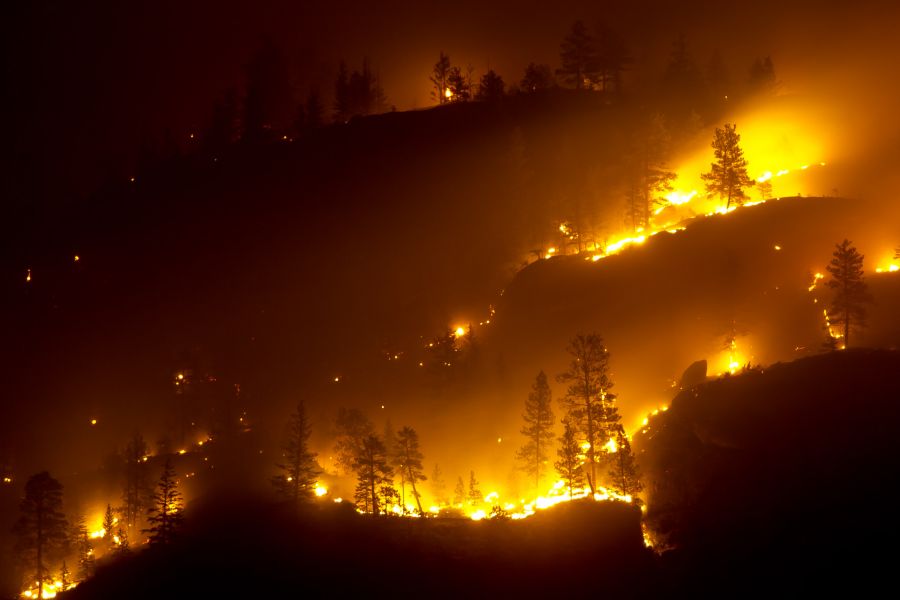