The fire was discovered on Aug. 1, about 23 kilometres south of Cranbrook.

According to an update from the BCWS on Sunday morning, the fire is considered to be held at 1,712 hectares.

This means that the wildfire is not likely to spread beyond predetermined boundaries.

As a result, the Regional District of East Kootenay rescinded an evacuation alert for six properties Saturday evening.

There are 84 firefighters, 17 support staff, 14 pieces of equipment and 13 helicopters on site Sunday.

Crews will work to secure control lines, conduct planned burns and continue to mop up around the fire’s perimeter.

“Yesterday crews completed the 25 foot blackline around all areas that planned ignitions occurred in along the south flank and southeast corner for the fire,” explains the BCWS.

“Today they will continue with mop up and extinguishment of hotspots along the line and advancing the blackline further into the fire perimeter up to 50 feet.”

Additionally, crews will continue to install hose lay along contingency lines on the fire’s northern and southern flanks and action hotspots across the perimeter.

(UPDATE: Aug. 19 @ 11:00 am) - The Connell Ridge wildfire burning just 23km south of Cranbrook has experienced a small amount of growth since its last update.

BCWS estimates the out-of-control fire to be around 1,769 hectares after the fire breached containment lines on the southeast flank Sunday.

Crews along with heavy pieces of equipment have since established guards around the perimeter of the slop-over.

Mop-up operations continue for most corners of the fire, and small-scale planned ignitions have been helpful in further securing containment lines.

On the southwest corner, crews will be conducting direct attacks and extinguishing hotspots as they pop up.

BCWS reports there are some steep terrain features in this area so ground crews are working in areas where it is safe to do so.

At this time there are 73 firefighters on scene, 19 pieces of heavy equipment and 13 helicopters providing bucketing support that is being shared throughout the region.

An evacuation alert issued by the RDEK remains in place for six properties near Mt. Connell.

In its latest update, the wildfire is now estimated to be 1,700 after more accurate mapping.

Wildfire smoke may have been very visible in the area yesterday, as crews have been working on ignition operations to bring the fire towards containment lines.

On the southwest corner, crews have been completing direct attacks in areas where it is safe to do so, although steep features in this area have limited their tactics.

A small slop-over occurred on the southeast flank yesterday evening, however, BCWS crews are confident that they will have success in containing it over the next 24 hours.

At this time there are 39 firefighters, 25 pieces of heavy equipment and 13 helicopters on scene along with two unit crews, and 14 additional operational support staff in place.

The Incident Management Team on the Connell Ridge wildfire is also working on the Weasel Creek wildfire and the Cummings Creek wildfire, which means resources are being shared between the three fires as needed.

(UPDATE: Aug. 13 @ 7:15 am) – After a week of stable fire activity, the Connell Ridge wildfire south of Cranbrook has experienced some growth.

The BC Wildfire Service is estimating the fire to be 1,503 hectares – up from the 1,350 that has been estimated since Aug. 6.

“Increased fire behaviour has been observed with the recent warmer temperatures and nearby communities can continue to expect smoke to be visible,” explains the agency.

Crews were unable to conduct large scale planned ignitions on Thursday due to unfavourable conditions, however, a few small planned burns did proceed closer to the fire’s perimeter.

According to the latest update from the BCWS, crews continue to build contingency lines should the fire cross any completed containment lines.

The incident management team continues to plan out these contingency lines and more planned burns that are expected to begin next week.

On Friday, there were 51 firefighters, 25 pieces of heavy equipment and 13 helicopters on site.

(UPDATE: Aug. 9 @ 9:20 am) – The BC Wildfire Service has not observed any new growth on the Connell Ridge wildfire, located south of Cranbrook.

The fire remains estimated at 1,350 hectares, however, crews are reporting an increase in fire behaviour due to a recent warming trend in the area.

“A larger aerial ignition operation could occur as early as tomorrow if conditions allow,” explains the BCWS.

Communities in the area will see an increase in smoke over the coming days.

There are 109 firefighters, 11 helicopters and 29 pieces of heavy equipment on site today.

#BCWildfire is responding to the Mount Evans wildfire (N11134), located approx 29 km SW of #KimberleyBC. The fire was detected this afternoon and is currently estimated at about 20 ha. A helicopter reconnaissance flight occurred upon detection, and response planning is underway. pic.twitter.com/Kx8ufNzaU1

As crews prepare for planned ignitions on the wildlife south of Cranbrook, another crew is responding to the Mount Evans wildfire which started Monday afternoon.

Located about 29 km southwest of Kimberley, the wildfire is estimated at about 20 ha, however, it is not currently threatening any structures.

“A helicopter reconnaissance flight occurred upon detection and response planning is underway,” explains the BCWS.

“The fire is burning at high elevation in steep terrain.” 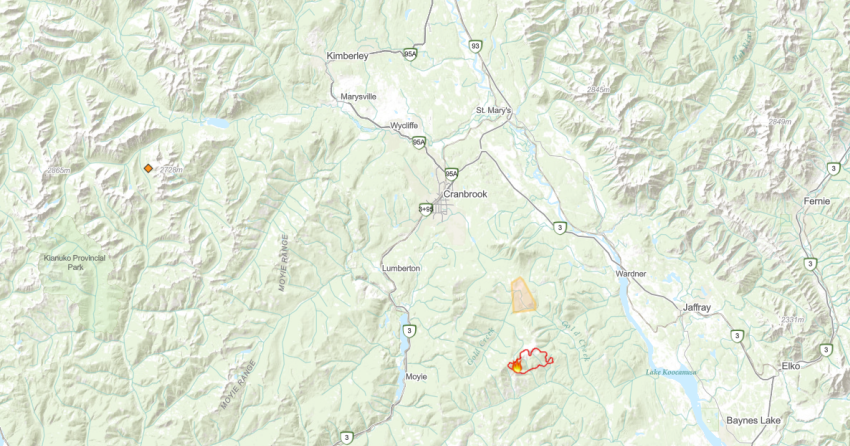 (UPDATE: Aug. 6 @ 10:40 am) – In the latest update from the BC Wildfire Service, the Connell Ridge wildfire has grown another 200 hectares. 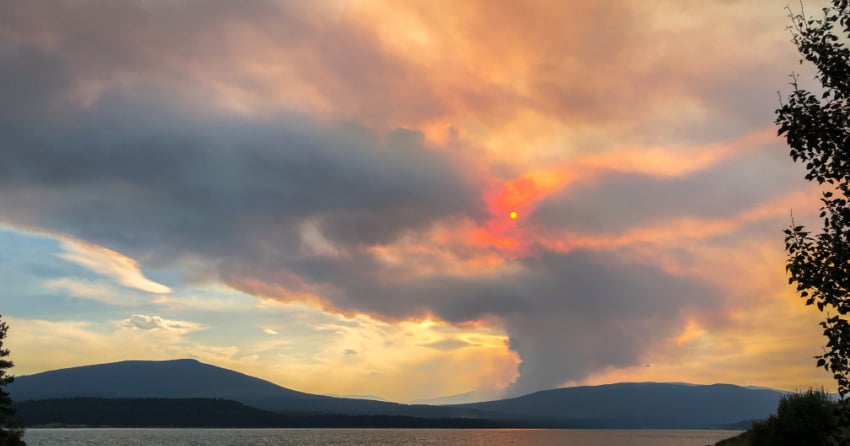 Despite this growth, the BCWS explains that less aggressive behaviour is still being observed on this fire due to cooler temperatures.

However, crews are preparing for temperatures to rise over the weekend which could result in increased fire behaviour.

There are 61 firefighters, six helicopters and 32 pieces of heavy equipment assigned to the site on Saturday.

As the fire continues to burn through steep, inoperable terrain, crews are busy building fire guards and planning out more containment lines.

An evacuation alert for six properties in the Regional District of East Kootenay remains in place.

(UPDATE: Aug. 5 @ 7:20 am) - There was some significant growth on the Connell Ridge wildfire Thursday.

The fire, located around 15 kilometres south of Cranbrook, jumped up to 1,143 hectares in size and the BC Wildfire Service said that represents around 200 hectares in growth.

That growth occured along the north and northeast flank of the fire.

"Less aggressive fire behavior was observed yesterday and today because of cooler temperatures," the BCWS noted. "Fire behaviour is expected to increase as temperatures rise over the weekend."

The fire continues to burn at higher elevations and pockets of rank three activity have been observed.

A machine guard is being constructed from the southeast to the southwest corners of the fire in order to establish a containment line.

A structure protection specialist continues to assess potential values at risk and develop strategies for protection.

There are 66 firefighters, five helicopters and 13 pieces of heavy equipment are assigned to the Connell Ridge wildfire.

An evacuation alert for six properties, issued by the Regional District of East Kootenay (RDEK) on Wednesday, remains in place.

While significant growth is expected to have happened in the last 24 hours, it is difficult to estimate because of the low-hanging smoke, the current estimate is 850 hectares, though that's anticipated to change when more accurate perimeter mapping can happen.

At this time there are 54 firefighters on the scene along with one helicopter. Crews on the ground are being supported by heavy pieces of equipment that are being moved into the staging area which will be establishing machine guards in strategic areas.

Helicopters will be bucketing on the South and West flanks to continue cooling the fire and reducing activity along the edge.

An evacuation alert has been issued by the Regional District of East Kootenay in the vicinity of this fire, and information can be found here.

The blaze just 15 km south of Cranbrook is now estimated to be around 500 hectares and has been placed as a Wildfire of Note.

At this time the fire is burning at a high elevation with rank 2 behavior, meaning it is a low vigor surface fire with a slow rate of spread; however, fire behavior is expected to increase throughout the day as an incoming cold front is forecasted to increase winds to greater than 25 km/h.

With increased fire behavior, this fire is expected to grow in size later today and through the evening.

An evacuation alert has been issued by the Regional District of East Kootenay (RDEK) for six properties in the vicinity of the fire, information on this alert can be found here.

Ground crews are working to establish control lines, which look like wide paths where all fuel is removed from the ground either by hand or with heavy equipment like bulldozers and excavators.

There are currently 48 firefighters on the scene who are being assisted by three helicopters and a heavy equipment strike team.

An incident management team is set to take over as early as tomorrow.

Ministry of Environment and Climate Change Strategy has issued a Smoky Skies Bulletin for areas of the RDEK.
Smoke conditions can change quickly. It is important to be mindful that exposure to smoke may affect your health.
For more info: https://t.co/ZF7KiiYz5U pic.twitter.com/T13tm2dReJ

The Ministry of Environment and Climate Change Strategy has issued a Smoky Skies Bulletin for areas of the RDEK.

The Connell Ridge wildfire is estimated to be around 150 hectares and is suspected to be caused by lightning.

Fire behaviour is spreading as a highly vigorous surface fire at a moderate to fast rate of speed.

BCWS is reporting one unit crew, an initial attack crew and response officers are on scene, with a second unit crew scheduled to arrive later in the day.

Ground crews are being supported by helicopters, air tankers and skimmers who are providing cooling support to the fire with retardant and water respectively.

Recreational boaters and other people in the water are asked to stay away from areas where aircrafts are operating at this time.

BCWS has also issued a campfire ban for the Southeast Fire Centre jurisdiction which will be coming into place on Thursday.