Kelowna controlled play for the first half and took an early lead with Ella Rolleston putting in a grit goal for the Wreckers. The second half started with a beautiful goal from Madison Shanks. Kamloops then put the pressure on coming within one. Kelowna continued their beautiful passing game and Molly Small put in the final goal of the game. Excellent Keeping from Centel Zol and Madison Shanks.

Kelowna dominated play in this game and despite many excellent chances, there was no scoring. Lydia Keating, Rachel Mcinnes, Naomi Sterns and Annika Gross all had an excellent game for the Wreckers. Jordan Jensen, Madison Shanks and Macalle White had excellent defensive games. Great goal keeping from Lydia Keating and Jordan Jensen.

The Kelowna United Burn registered two more comfortable victories on the weekend, keeping their TOYSL unbeaten streak alive. Facing off first against Vernon 2, the Burn got an early goal from Brooklyn “Little B” Piche and never looked back. They registered two more unanswered goals for a 3-0 final. Then they played a much-improved Vernon 1 team, but still cruised to a 6-0 victory, with Little B netting three more goals. Vernon had a few opportunities, including a free kick just outside of the box, but the Kelowna wall was solid and Vernon failed to convert. Vernon had one other opportunity to foil the shutout with a 2 on 1 breakaway, but the Kelowna keeper, Krysha “Crusher” Czenczek, expertly closed off the angle and the Vernon player shot wide.

The Fusion girls were looking to extend their winning streak to four games on a cool, wet morning in Salmon Arm against Vernon II. Kelowna dominated possession with good ball movement throughout the entire game. Lindsay Goett opened the scoring at the 21' mark with a great solo effort down the right flank, finishing with a low, hard shot in the near corner. Two minutes later, Sophie Lachapelle sent Alysia Foster through on a breakaway to make it 2-0. Kelowna continued to possess the ball and threatened to score several times, but the Vernon goalie had a fantastic game. Regardless, KU was just too strong and relentless with their attacking. At the 48' mark, Brooke Barcelona made a fantastic overlapping run down the left flank and fed the ball to a wide open Alysia Foster who netted her second goal of the game. Goalies Sophie Gibson and Lindsay Goett shared the shut-out.

The afternoon game saw Kelowna lose their first of the season to a Kamloops team with a definite size advantage. The KU girls played an impressive brand of possession ball and carried the play throughout most of the game. Ball movement and support off the ball was excellent in the back two-thirds of the pitch, but KU struggled to penetrate the Kamloops back four, unable to find the back of the net. The Kamloops game plan paid off in terms of goals, as they scored three in the second half.

This game saw Kelowna go up 2 nil with goals from Grace Macnaull and in the second half by Skye Neale, a game very well defended by a confident Kelowna team.

Yet another shut out from Yan Liang.

The 2nd game was more of the same dominance from Kelowna as they were up 5 nil at the half, goals coming from Kaley Krivoshein, Ashlyn Eisenkrein, Melia Thompson, Madeline Middlesteadt and Sammi Brown. Nice game from Skye Neale with 2 assists. Also assists from Alison McDuff and Jesse Large. Kelowna kept the pressure coming in the second half but couldn’t bag anymore goals as the Vernon keeper made several key saves. Kelowna split the goalkeeping duties between Yan Liang and Madeline Middlesteadt, who shared the shut out.

This was an evenly played match. The first goal was against KU at 15'. Kate Cartier tied it up for KU. Chloe Howe scored for KU to take the lead. Kamloops tied it up with a goal against KU to end the game.

Goals scored by Kate Cartier at 15', Melaina Corrado at 17' and the final goal just before half time by Tayshja Clark. The 2nd half was scoreless.

The KU Girls U14 team played two league games on the weekend. On Saturday the team travelled to Kamloops to play at Exhibition park for a game against the Kamloops Orange team. The Kelowna girls were moving the ball really well and setting up a lot of opportunities and shots on goal. Although Kelowna maintained the majority of the possession, the half ended with Kamloops ahead by a score of 1-0. In the second half, the KU girls increased their intensity, and maintained the attacking/ possession game they have been working on in practice. KU created many opportunities, and the Kamloops keeper was kept busy making several good saves. The game finished with a 2-1 Kelowna win. Outside midfielder Wynne Hamilton capped off a strong game pushing forward on the attack and scoring the first goal of the second half. Cara Hilts (forward) scored the second goal. After getting the ball behind the Kamloops defenders, Cara showed good control dribbling around a hard challenge from the Kamloops keeper to put away the game winner.

Keeper Christine Bower was in goal for both games, and registered her second shut-out of the season in the Penticton game. 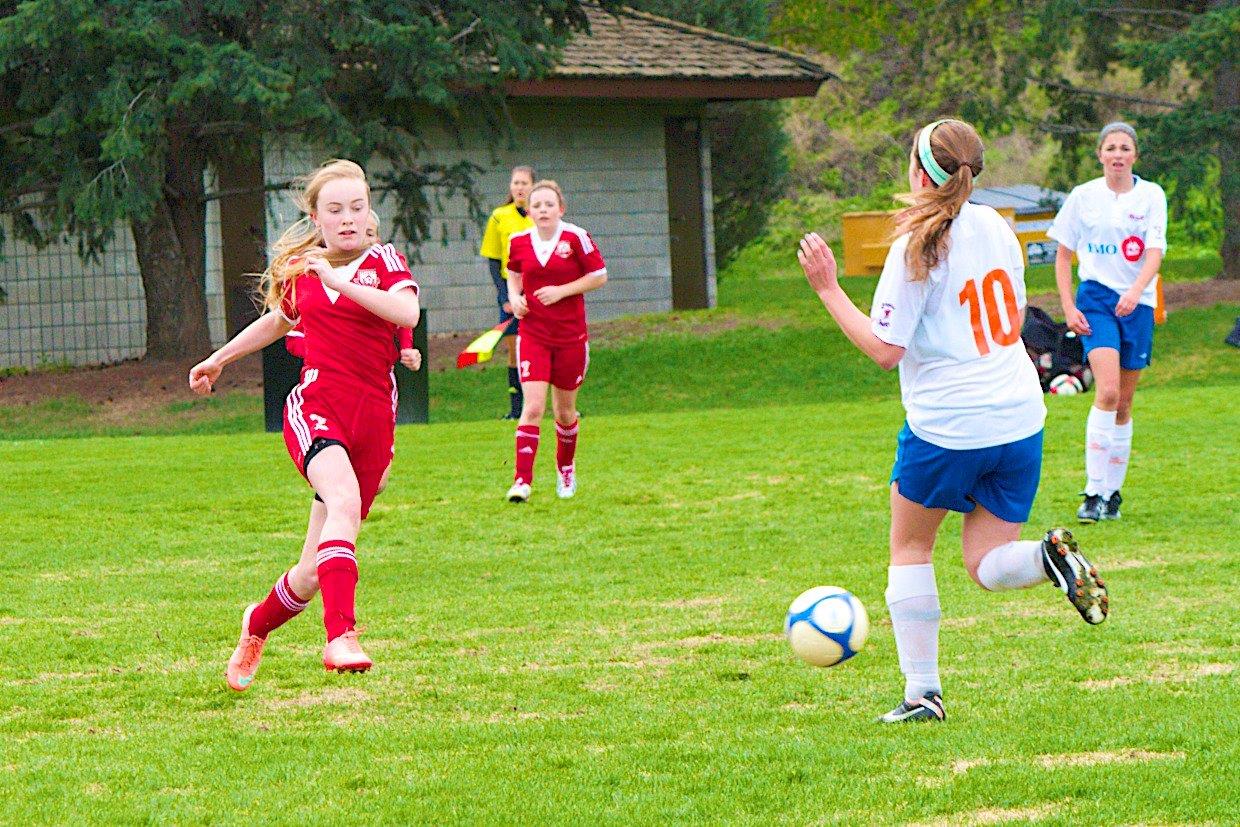 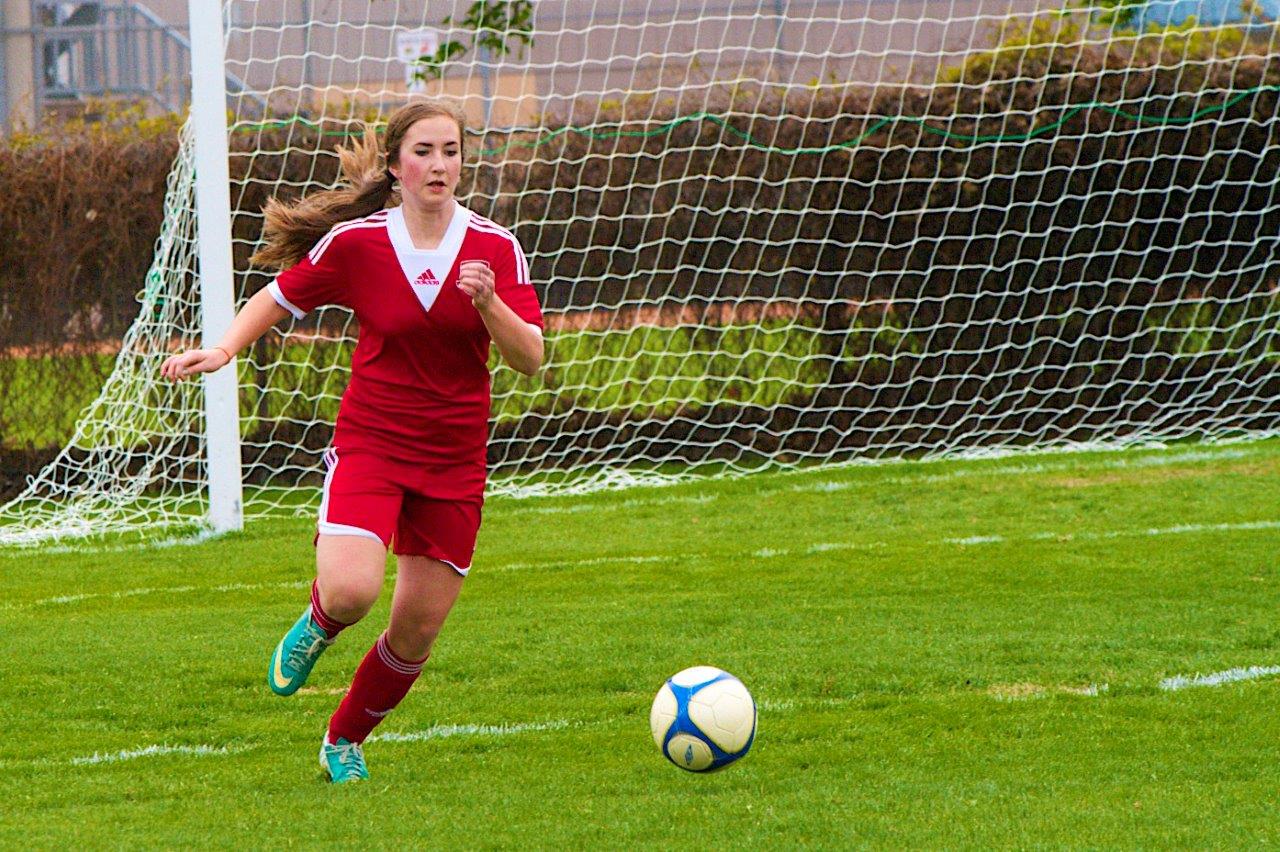 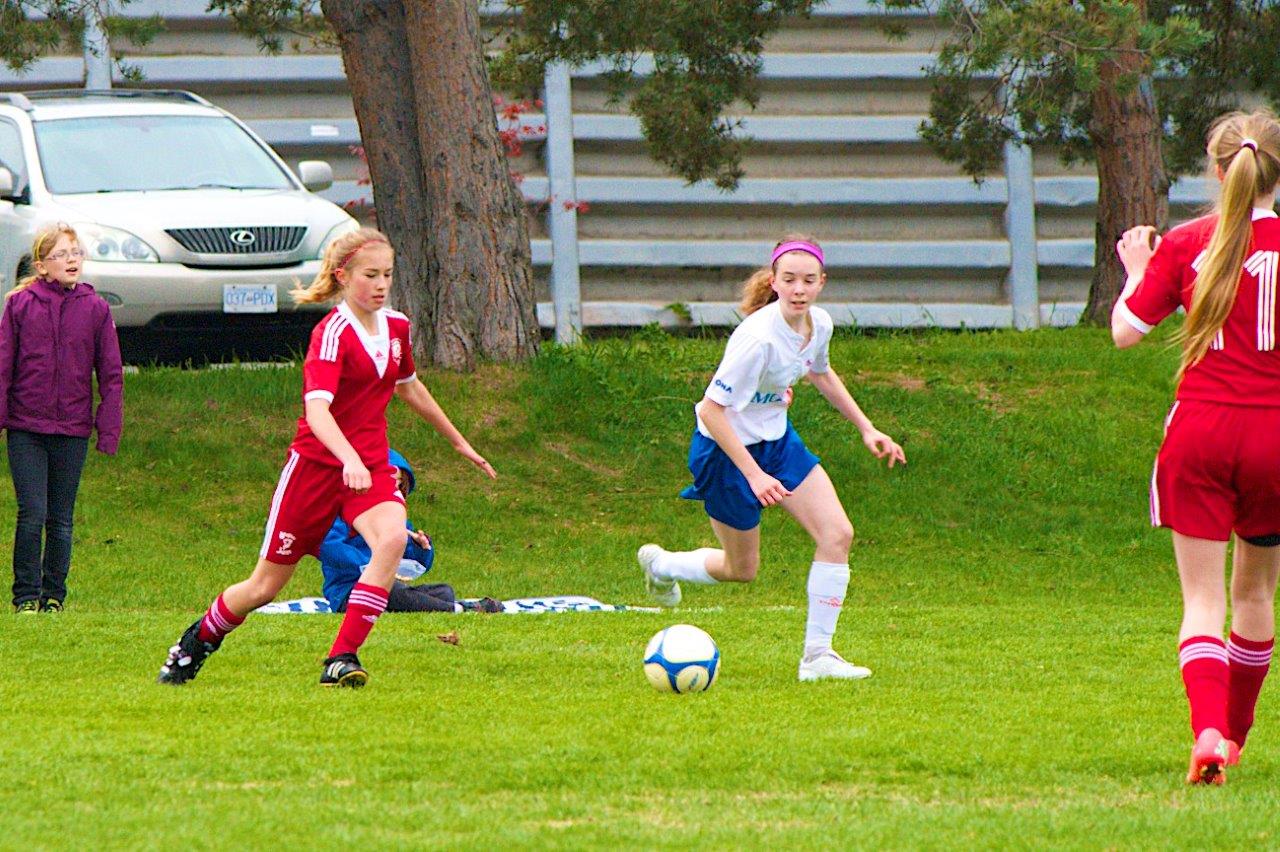 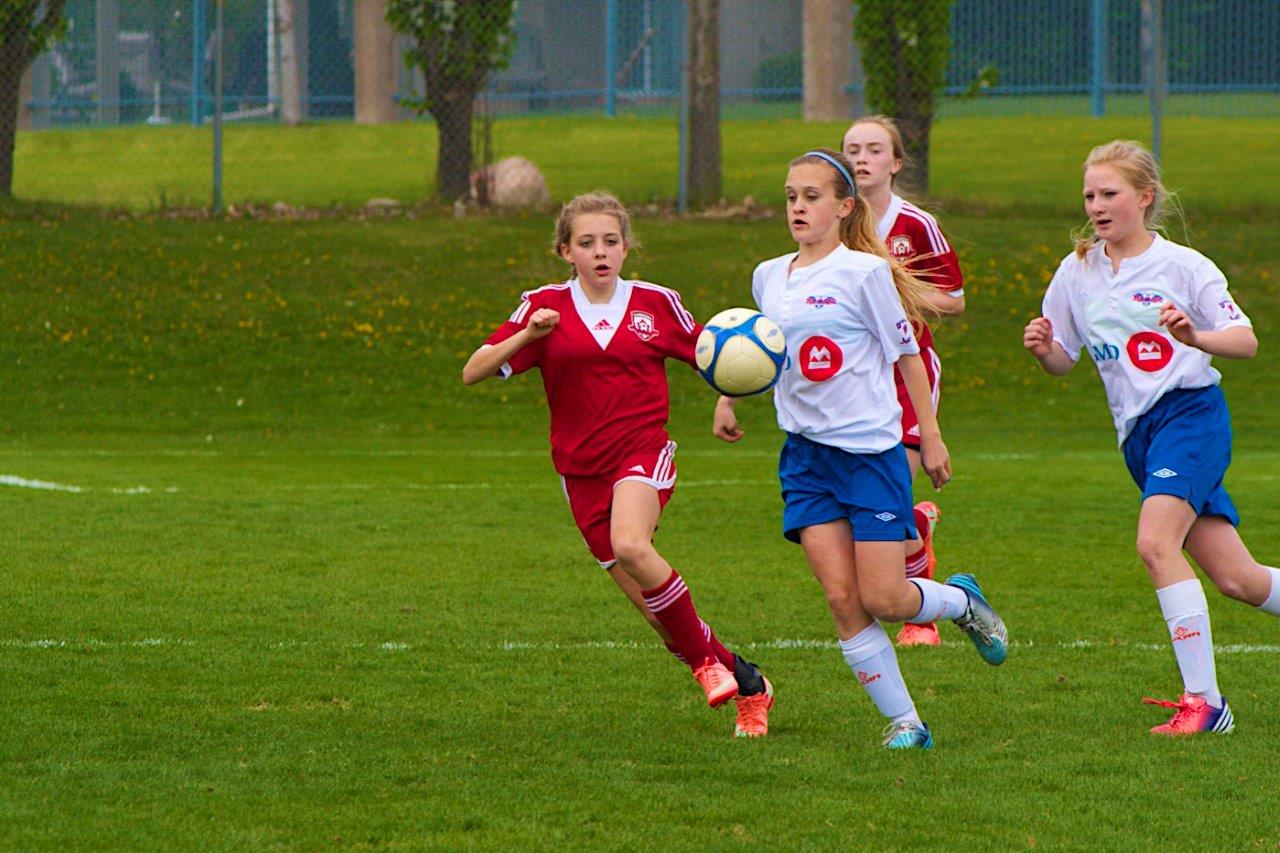 The Kamloops team came out strong and controlled the first half of the game. Kelowna’s goalie Fiona Reha was strong in net, successfully making save after save. KU came out stronger in the second half. Kamloops kept the pressure on, finally getting one past Kelowna's keeper to end the game Kelowna 0 - Kamloops 1.

Kelowna and Penticton came out evenly matched with both teams making great plays on a very rainy spring afternoon. Neither team was able to finish, ending the half with no score. Kelowna continued to put on the pressure. With 10 minutes left in the game Kelowna found the back of Penticton’s net. Avery Lawerence made a high pass up to Angelia Ostrom. Angelia dropped the ball to her feet and scored to put Kelowna on the board. Minutes later, KU capitalized again off a free kick that started with Nicola Lopes. Nicola moved the ball to Megan Greenlees and then onto Angelia Ostrom for Kelowna’s second goal. Final score 2 - 0 for KU.

This past weekend in Kamloops, the Gladiators rebounded to beat Penticton 3-2 after giving up a 2-0 lead. Under difficult conditions of rain, wind, cold, and a committed Penticton team, the Gladiators did just enough to get by the team from the south Okanagan. Miguel Ambrosio, Gavin Lowler and Wesley Turcot were on the scoring sheet. In their second effort of the day, the KU Gladiators displayed skilled, attractive soccer by beating Vernon 2-1. While the score would suggest a close game, in truth the Gladiators dominated the play but just could not capitalize. Julius Kerner and Wesley Turcot were the goals scorers.

Saturday, the KU boys played Kamloops. It was an exciting game, equally matched between Kamloops and the Kelowna Predators resulting in a scoreless tie.

Sunday, the boys played Vernon resulting in a 1 – 0 win for KU. 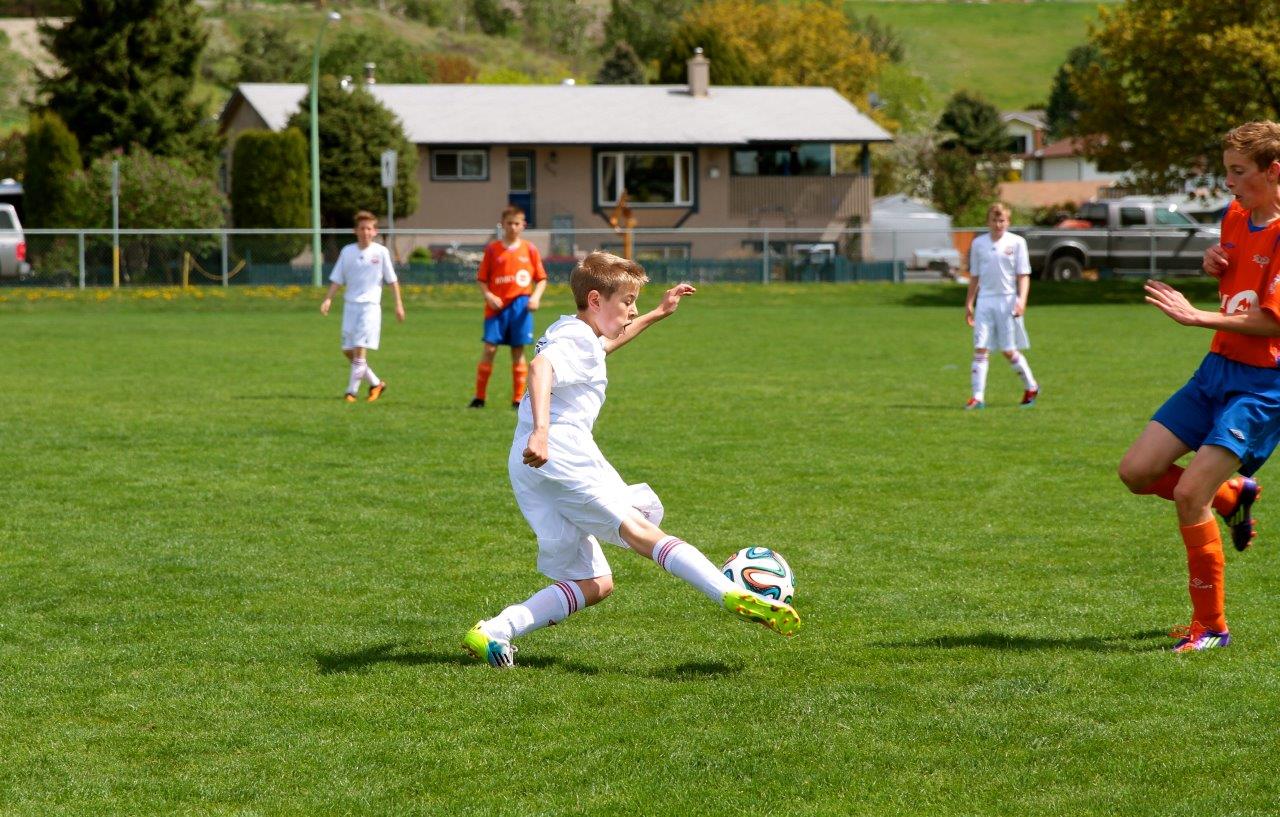 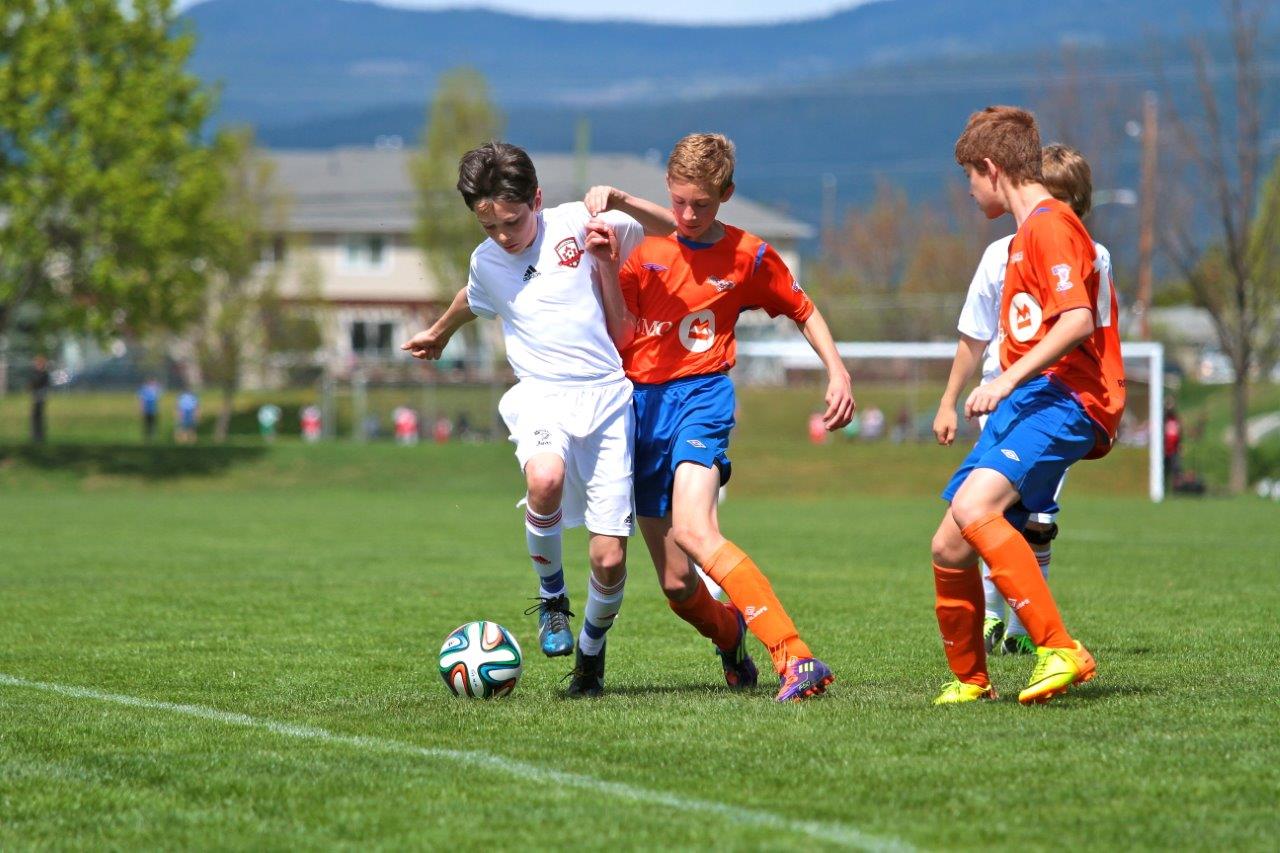 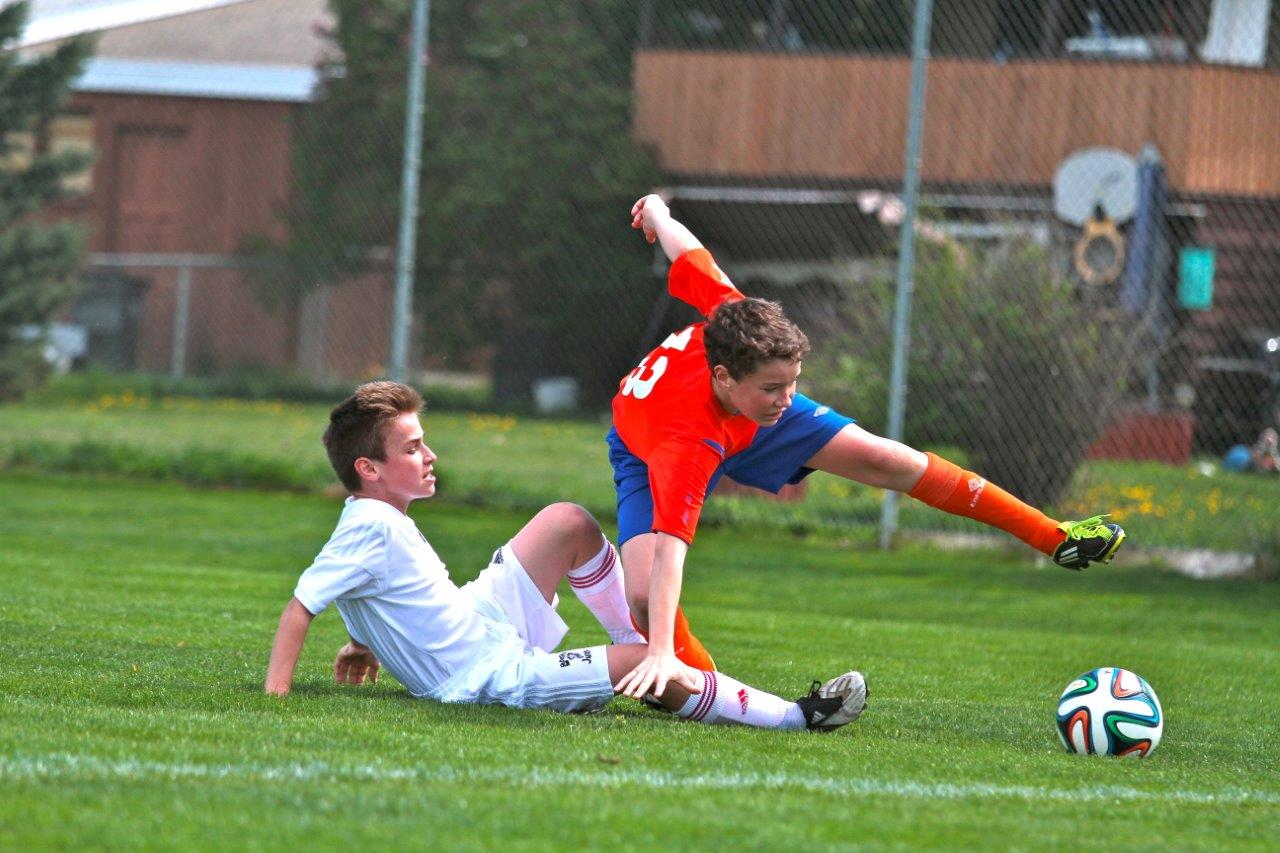 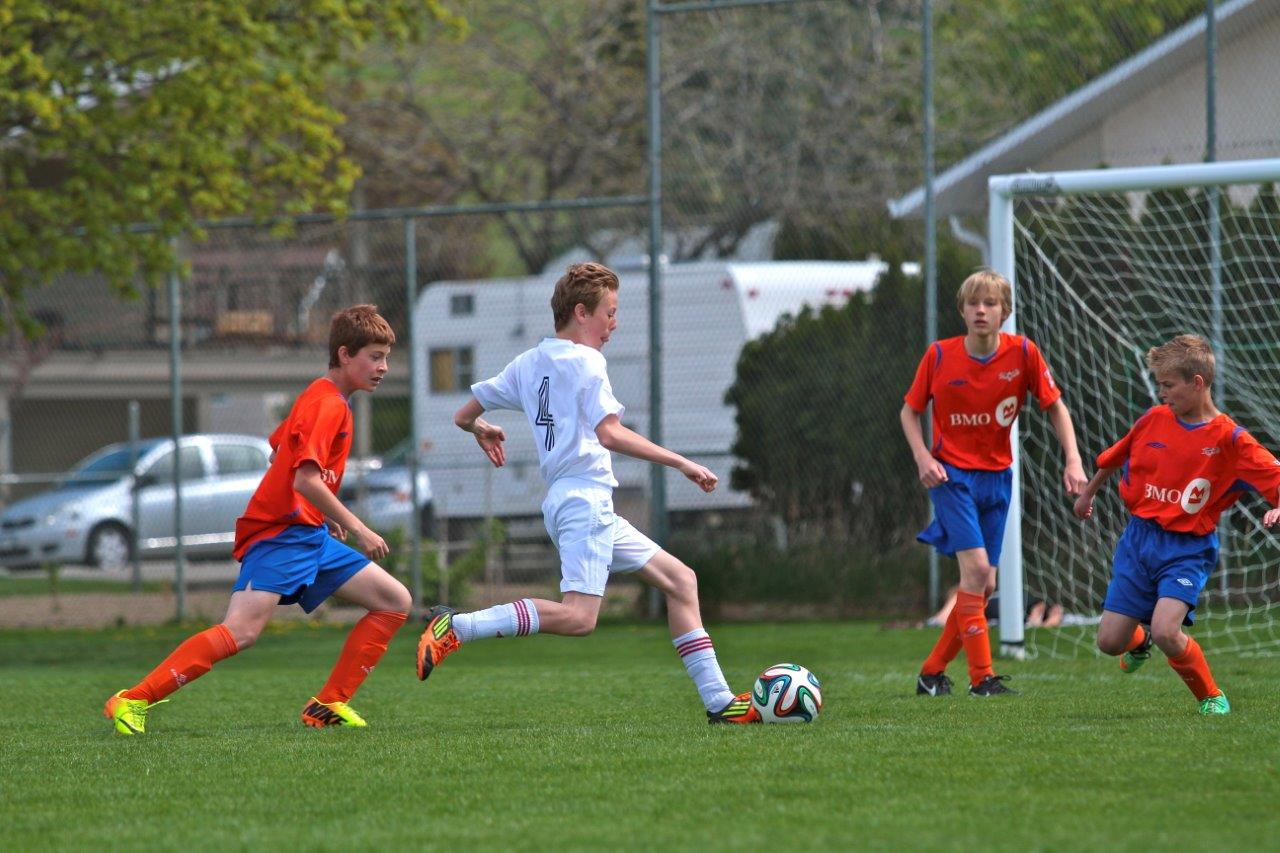 The KU U14 Boys had a winning weekend. On Saturday, May 3rd the boys faced Vernon and won with a 2-1 final score. Ethan Attwood scored in the first period and Jason Hesketh found the net after several excellent opportunities for the game winner.

On Sunday, the boys travelled to Kamloops for a 4-0 win over the Blaze. Attwood and Hesketh both scored again, as well as Presley Kreeft and Harrison deHass.

The team will return to Kamloops on the Victoria Long Weekend to compete in the Slurpee Cup.