UBC Okanagan’s Carolyn Lee is living up to her All-Canadian status at the PING Canadian Collegiate Athletic Association golf championship in Chilliwack.

The Heat captain carded a 4-over 76 on Thursday to take a five-stroke lead into the final day of the 54-hole CCAA national championship on Friday at the Chilliwack Golf and Country Club. 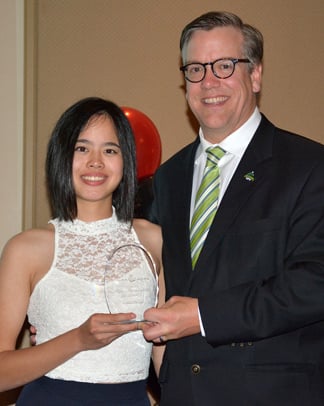 Lee, named to the CCAA All-Canadian team earlier this week, opened the three-day event with a 79 on Wednesday and recorded the low score of the day on the second round to move ahead of first-round leader, Sonia Nagindas of the Humber College Hawks (Toronto).

The second-day surge by Lee helped the Heat take over second place in the team competition, although the Kelowna-squad team is still 10 strokes back of Humber going into the third and final round.

Lee, a native of Calgary, in her second year at UBCO, was 1-over par after nine holes. She birdied the par-3 fourth hole, while taking back-to-back bogeys on the sixth and seventh. While she shaved a stroke from par on the 10th hole, the biology major marked bogeys on holes 13 through 16 before finishing with a bird on the 18th.

Rookie teammate, Lauren Siemers, a 2015 graduate of Mt. Boucherie Secondary School, shot an 88 on Thursday after posting an opening round of 83 and sits in 10th place among the 28 female golfers.

Emily Adams of the Heat is another nine strokes back after shooting her second straight 90.

Lee, who finished third at last year’s national championship, earned the All-Canadian award based on her leading the Heat to a provincial championship and being named a PacWest Conference all-star. She finished second in the overall PacWest standings.

Meanwhile, in the men’s CCAA competition, the Heat sit in sixth place, 16 strokes back of tournament-leading Niagara College Knights of Ontario and seven strokes behind the third-place Georgian College Grizzlies of Barrie, Ont.

James Casorso shot 1-over 73 on Thursday after a first-round score of 1-under 71 on Wednesday. The Immaculata High School graduate, in his third year at UBCO, is tied for 11th place among the 72 male golfers. That’s eight strokes back of the leader, Stephen Brown of Lambton College of Sarnia, Ont.

The Heat’s Ollie Rizun, a first-year student/athlete from Squamish, has shot rounds of 72 and 73 and is one stroke back of Casorso going into Friday’s final 18. He’s tied with UBCO teammate Casey Sullivan (74-71), a 2014 grad of Kelowna Secondary School.