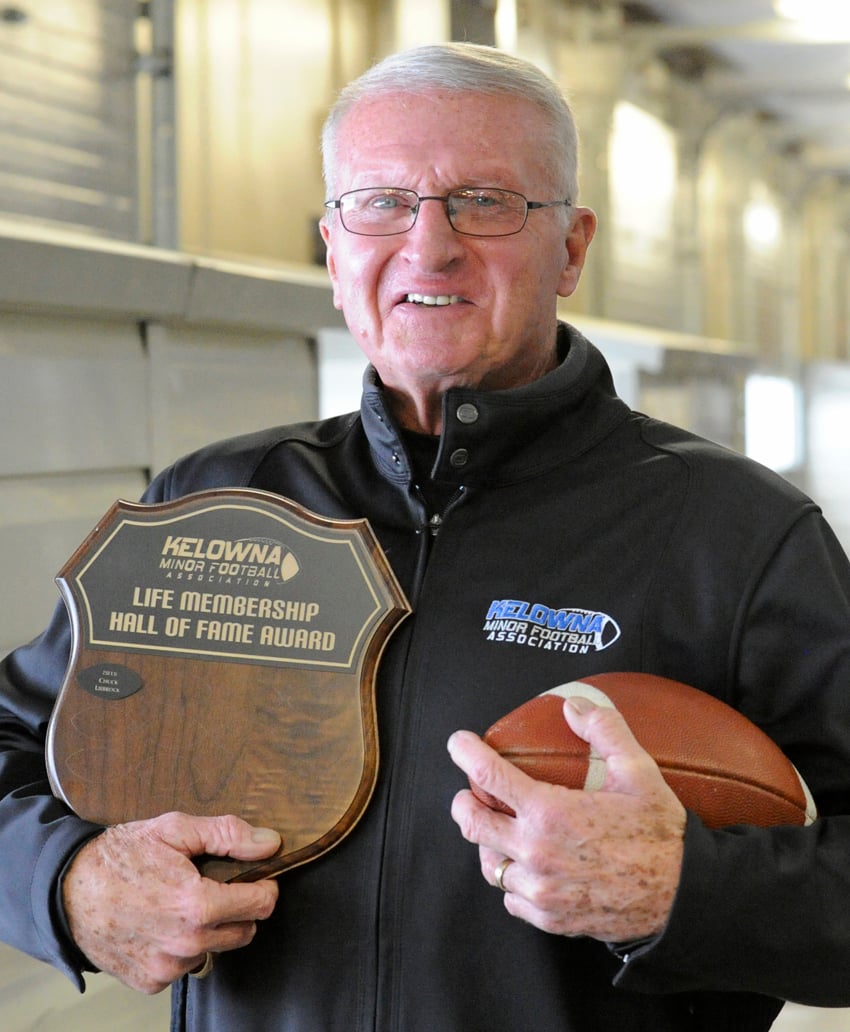 But the former professional player insists he’s received far more than he’s given as a volunteer with the Kelowna Minor Football Association.

The recipient of the first-ever lifetime membership/hall of fame award at the recent KMFA volunteer and coach appreciation awards night, Liebrock said he was humbled to be awarded again for the things that give so much intrinsic reward. 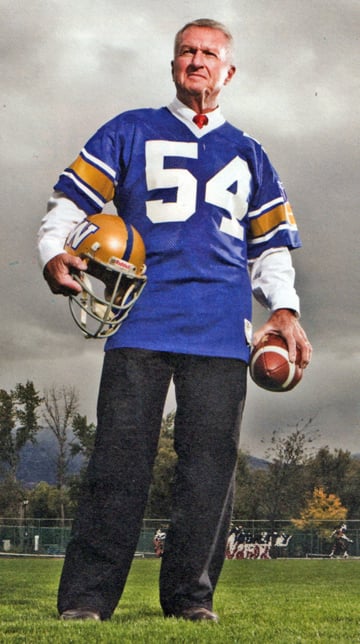 “I am so thankful for being able to live most of my life involved in a game I love,” said the 70-year-old former Canadian Football League lineman with the Toronto Argonauts and Winnipeg Blue Bombers.

“I still get a thrill out of watching what the power of hard work, tenacity, teamwork and fun can do to make young men develop the sense of worth, confidence, self esteem and all the other traits we need for success in life.”

The Windsor, Ont. native and a first-round draft pick (1968) of the Argos for whom he played two years, and a member of the Blue Bombers for eight years, Liebrock arrived in Kelowna with his wife, Michele, in 2007 and almost immediately was recruited by a parent to help out with the KMFA.

“It was supposed to be just for a weekend clinic, but I had so much fun with the kids and the coaches, I kept on going back, and have been involved ever since. It’s been a phenomenal experience.”

Admittedly biased, having been involved for 60 years — since playing at the community level in Ontario — Liebrock unabashedly describes football as the ultimate team sport.

“Even the best quarterback can’t throw the ball while laying on his backside. He needs offensive linemen and other teammates to do their job. And in the same way, he can’t complete a pass if there isn’t blocking from those in the ‘land of the anonymous’ or if the receiver doesn’t run the right route.” 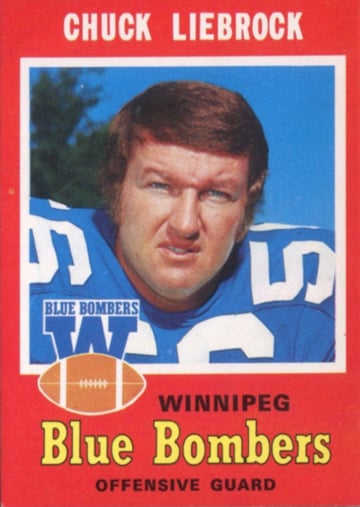 He’s equally steadfast in his belief that the game provides a level playing field.

“You step on the field and everyone is equal — it doesn’t matter where you come from. There’s room for everyone, regardless of size, speed or athletic ability. And the kids learn quickly that whoever works the hardest, gets the most out of the game.”

While Liebrock began coaching and helped guide two KMFA teams to provincial championships, he joined the association’s executive three years later. He was president for three years, the commissioner of the Southern Interior Football Conference, and is going into his third season as the director of coaches.

“To be honest, it is sometimes problematic working with coaches and volunteers, but the good heavily outweighs the not-so-good — especially if you keep in mind that the focus is on the kids — teaching fundamentals; providing a challenge; keeping them engaged and motivated; and especially making it fun.”

Jeff Koltun, the current KMFA president, said Liebrock brings all of those attributes to minor football.

“Chuck is a much-valued member of our board and a great contributor to all we do with our football program,” noted Koltun. “Chuck’s award speaks to his amazing passion for the game and the relentless energy he gives back to football and to our young athletes. I’m honoured to have his input on our board and to have him as a friend.”

Arden Knoll, who coached with Liebrock for four seasons, said the two have become close friends through their common love of football.

“Chuck always comes with the most positive attitude and excitement — it’s infectious no matter what the project,” said Knoll. “He is never afraid of hard work, as long as there’s the element of purpose and fun. Once committed to something, he gives his heart and soul in a tireless effort to succeed.”

Knoll added that the lifetime membership award was well deserved.

“Only those who have had the honour of working or playing sports with this man truly know how wonderful he is and how dedicated he is to making the lives of others better. The kids’ interest is always foremost in any decisions he makes as a coach or an executive member.”

“The players and the football community as a whole have benefitted immensely from Chuck’s involvement."

At the KMFA’s volunteer and coach appreciation night earlier this month, Dean Kennedy was presented with the new and aptly named Chuck Liebrock Legacy Award.

Kennedy, a coach of special teams for Kelowna Lions teams the past few years, is also the director of flag football and one of the main forces responsible for the exponential growth of the game in Kelowna.

The KMFA recognized the work of volunteers of the year from flag and tackle football as well:

For more information on the KMFA.