No. 1 Volleyball Women Still With Much On The Line This Weekend

While the UBC Okanagan Heat have long clinched a playoff spot and home-court advantage in the first round of the CIS Canada West Conference post-season, much is still on the line as they play host to the Mount Royal University Cougars in their final match of the regular season this weekend.

The Heat, No. 1 among CIS women’s volleyball teams in the country and sporting a 20-2 record, will be looking for a sweep of the visiting Cougars, who are fighting for their playoff lives with crosstown rival University of Calgary Dinos.

A sweep of the two matches — Friday (6 p.m.) and Saturday (5 p.m.) — will not only guarantee the Heat first place in Canada West, but also earn them a bye in the first round of the playoffs and the right to host the Final Four conference championship playoff March 4 and 5. 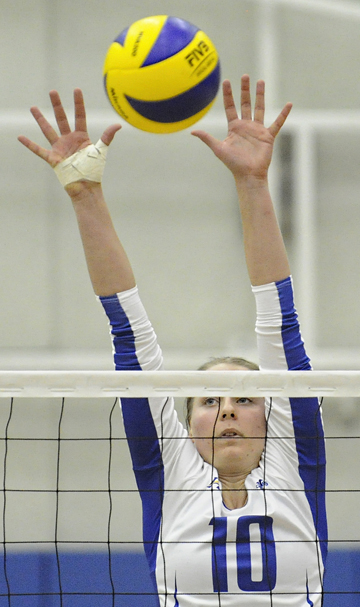 Should the Heat stumble against the Cougars, allowing second-place Trinity Western Spartans (19-3) to take over top spot, the Heat would still host the first round of the playoffs as the second or third seed and play the sixth- or seventh-place finishers in the regular-season.

The top three teams, plus the host Brandon Bobcats, will advance to the CIS championship tournament. The Heat have reached the Canada West Final Four the past two seasons, only to place fourth both times and miss out on a trip to the national competition.

While the focus will be on maintaining the No. 1 spot in Canada West and the entire CIS, some of the spotlight will be on six graduating players — Katy Klomps, Katie Wuttunee, Brianna Beamish, Kailin Jones, Chandler Proch and Kate DeJong — who will be honoured following Saturday’s match at UBCO.

Klomps, a graduate of Surrey Christian School in 2011, is the most decorated of the six, starting with being named the Heat’s rookie of the year.

The 6-foot-2 middle’s second season was cut short by an injury in January, but she still finished with 79 blocks, sixth best in the CIS. She also earned CIS Academic All-Canadian honours.

Klomps was an Academic All-Canadian in her third year, as well as being selected as a Canada West all-star. 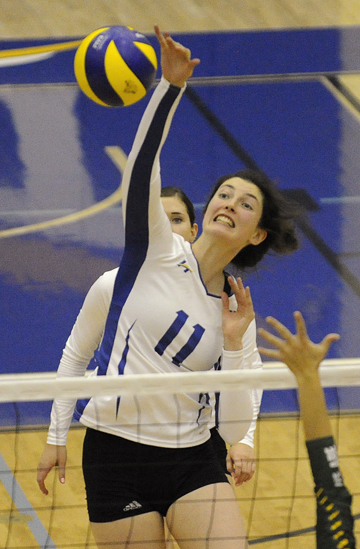 In her fourth season, Klomps became the first-ever athlete at UBC Okanagan to be named to a CIS All-Canadian team and was selected as a Canada West first-team all-star. That led to her being named the UBCO female athlete of the year.

Following a summer in which she went to Romania to volunteer with an organization that works in a children’s hospital, Klomps, a UBC school of nursing student, continued her assault on the Canada West record books. Her 482 career blocks is second all-time to Alicia Perrin (512) of Trinity, and her 1.35 blocks per set will be the highest ever in Canada West by the end of the season.

Wuttunee, Klomps’ middle partner, will graduate this spring with an arts degree after four seasons with the Heat, with whom she signed in 2012 after playing her first post-secondary season with Capilano University.

In her first season at UBCO, Wuttunee was third in team kills with 118 and second in total blocks with 57, while the Carson Graham Secondary School (North Vancouver) grad displayed her durability by playing in all 22 matches the next season. 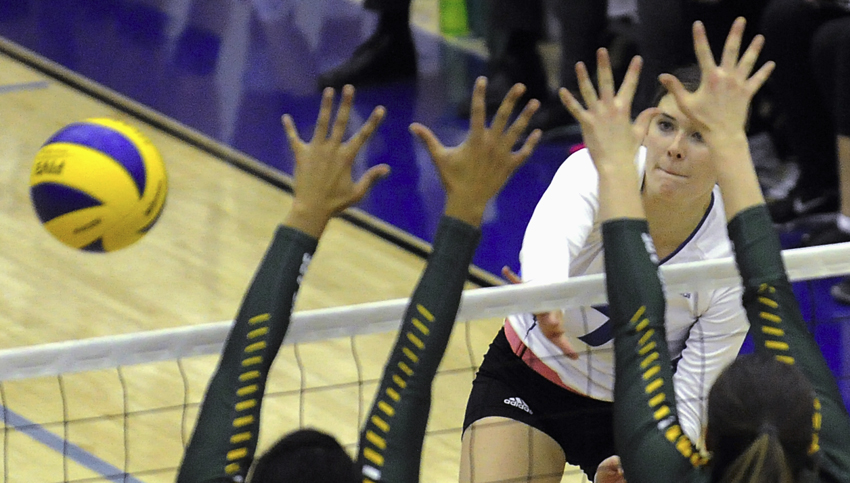 The 2014-15 season saw the 6-foot-3 blocker earn Canada West all-star honours and was a nominee for the UBCO female athlete of the year. She played in 21 of 24 matches and finished second in Canada West and 10th in CIS in hitting percentage (.334).

Setting a career high in kills with 13 against Trinity Western earlier this season and setting a career mark in efficiency of .500 in that match, Wuttunee continues to impress. 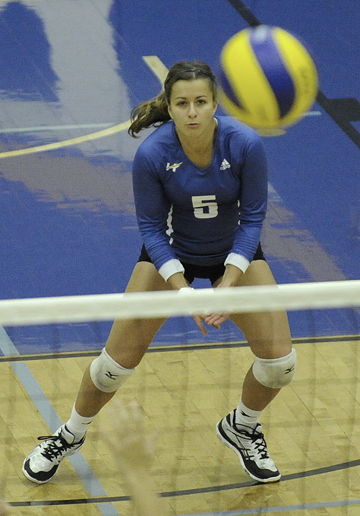 Beamish, a graduate of Earl Marriot Secondary in Surrey, has played her entire career at UBCO in the CIS and is second all-time in kills to Alex Basso (Immaculata High School) with 829. Through 96 matches, the 5-foot-11 outside hitter has a total of 101 blocks, 43 assists and 960.5 points, again second to Basso’s 1,015.5.

In her rookie season, Beamish played in 17 of 20 matches with the Heat, while she saw action in 14 of 22 Canada West matches in her second season.

The 2013-14 season saw Beamish finish third in team kills with 154, while last season she played in 22 of 24 Canada West matches and led the team in scoring with 302 points, finishing fifth in the conference in the same category. A nominee for the UBCO female athlete of the year award, she finished with career highs of 21 kills and 13 digs in matches against Alberta and Trinity respectively.

This season Beamish earned Canada West third star of the week honours and has played in 22 matches and set a career-high of five aces in a match against Thompson Rivers.

Jones, a Kelowna Secondary School product, began her career while the Heat were still in the B.C. Collegiate Athletic Association and helped the team win a provincial gold medal. 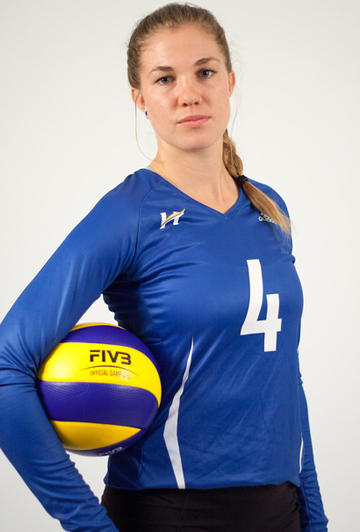 Her sophomore year saw Jones start 19 of 20 matches and set a season-high mark of 14 digs in a match against Thompson Rivers. She played another 20 matches in 2012-13 and had a high of 19 digs against Mount Royal.

Jones red-shirted in the 2013-14 season, and to fulfill a practicum requirements, was the team’s student trainer.

In her fourth year of eligibility,Jones played in all 24 matches for the Heat, finishing with 324 digs, seventh best in the CIS, with a season high of 21 in a match against Trinity.

This season, she bettered that mark with a career-best 28 digs in the Heat’s first win against the Trinity Spartans earlier this month.

Coming into the weekend, Jones is second all-time to Heat coach Jackie Toews (nee Wong) in career digs with 865. Wong finished with 1,048.

Proch, another KSS grad (2010), made an immediate impact with the Heat, being named to the BCCAA all-rookie team while setting for the UBCO provincial gold medalists. 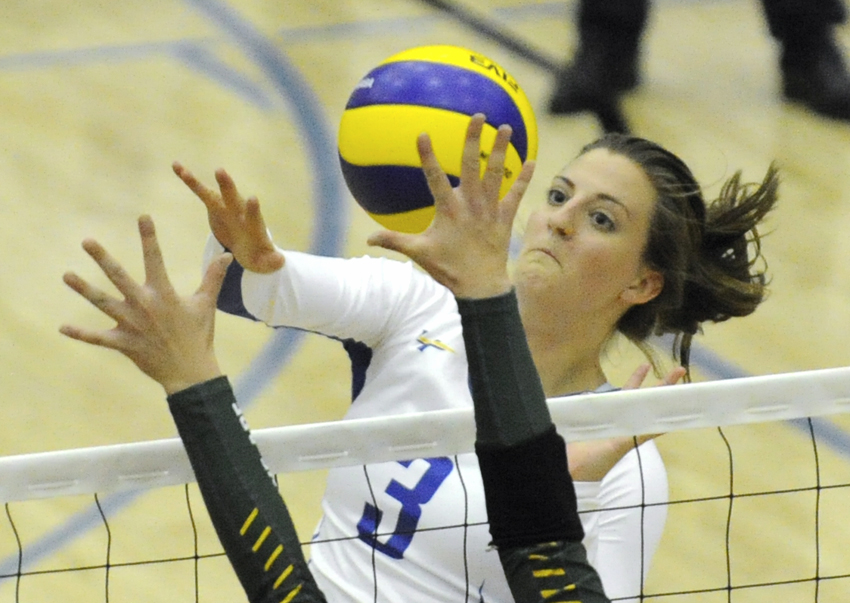 The 5-foot-10 setter red-shirted in the 2012-13 season and was the team’s student trainer as part of the necessary practicum for her human kinetics degree, with which she will graduate this spring.

The next season Proch was named a CIS Academic All Canadian, presented with the UBC Okanagan Heat women’s volleyball leadership and dedication award, and played in all 22 Canada West matches.

Named the UBCO female student athlete of the year in the 2014-15 season, Proch played in 23 of the team’s 24 matches.

Meanwhile, DeJong, in an interview following her first year as a member of the Heat and just after she went on a mission to Jamaica helping out kids abroad, said:

"Whether I’m on or off the court I have a job. I’m a teammate and I have that responsibility, so anything that I can do to help players on my team is great.”

In her five seasons on the Heat any teammate or coach will say she lived up to her goals.

The fifth year right side has known only CIS competition with UBC Okanagan since coming to the Heat out of Calgary Christian High School and the Dinos volleyball club.