Kelowna United captured six of a possible nine Thompson-Okanagan Youth Soccer League playoff championships on the weekend and will be represented by 11 teams at BC Soccer provincial tournaments in early July.

Two United boys teams — U13 (Neale) and U14 (West) — added TOYSL playoff titles to their regular-season championship and will make a bid for a BC Soccer crown at the Les Sinnott Memorial Boys Provincial Cup in West Vancouver July 7-10.

The U13s defeated the Kelowna United K team in the TOYSL playoff final on Sunday in Penticton while the U14s downed Kelowna L in that division title match.

The younger teams will be joined in West Vancouver by the Kelowna United U18s, who won the TOYSL playoffs by defeating the host Penticton Pinnacles 1-0. Corbin Beauchemin scored the lone Kelowna goal off a feed from Josh Clark in the final on Sunday. 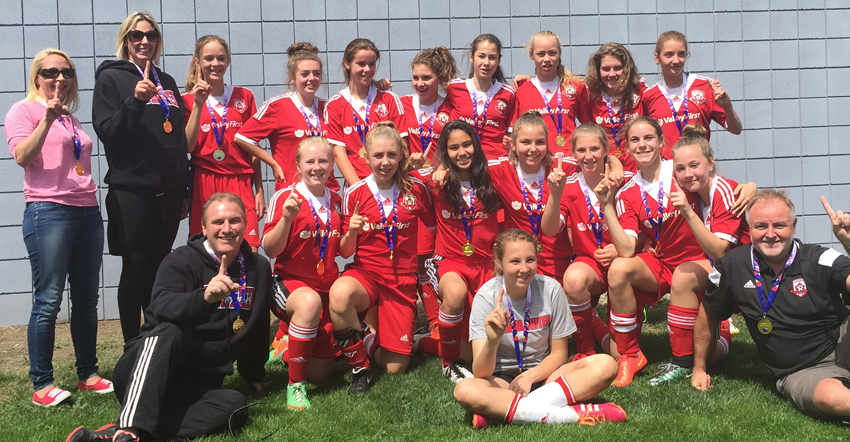 Also representing Kelowna will be the United U16 and U17 boys teams. They were given a bye to the provincial tournament by virtue of being the only team in the Thompson-Okanagan in their age division.

Meanwhile, the BC Soccer Provincial B Cup for girls will be played in Penticton on the same weekend, with five Kelowna United teams vying for the Cup at Kings Park.

Leading the way will be the U15 United girls, who added a TOYSL playoff championship to their regular-season title by defeating Penticton in Sunday’s title match in Penticton.

The U13 United (Lommer) upset regular-season champion Kelowna (V) in the playoff final on Sunday while Kelowna U14 (Smith) downed Shuswap 3-1 in their title match. Ashlyn Eisenkrein, Llaya Joseph and Madison Dyck scored for the United U14s.