Head coach Rylan Ferster made it loud and clear the West Kelowna Warriors aren’t going to make any noise in the B.C. Hockey League this season if they don’t get more performances like they did on Sunday from their top offensive players. 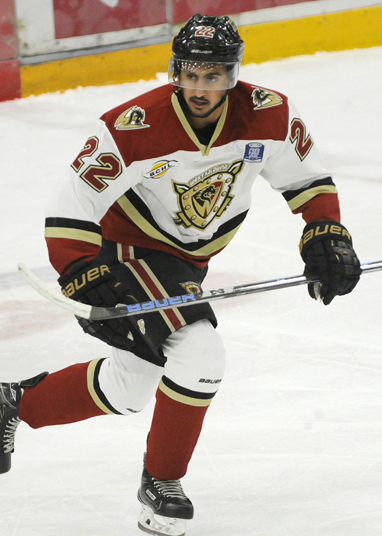 “It’s no secret. We need our top guys to lead if we’re going to make any kind of noise in this division,” said Ferster, whose team was coming off an embarrassing 9-2 road loss on Friday to the Wenatchee Wild.

It was their fifth consecutive defeat on the road.

“They’ve been doing a lot of the right things, but then again things haven’t been going their way around the net. Sometimes it’s a case of not going into the dirty areas as much as you should — but now these guys are going there more, so full marks to them today.”

Up against a team playing its third road game in three days, the Warriors jumped out to a quick 2-0 lead on goals by Kelowna product, Lucas Cullen, and a powerplay marker by Dubois, his ninth goal in 21 games.

The hosts led 2-1 after the first period and had a 3-2 lead going into the third on Michael Lombardi’s sixth of the season. Captain Jared Marino , with assists from Dhaliwal and Dubois, notched what would stand up as the winner at 1:57 of the third period while the Warriors were playing with the man advantage. 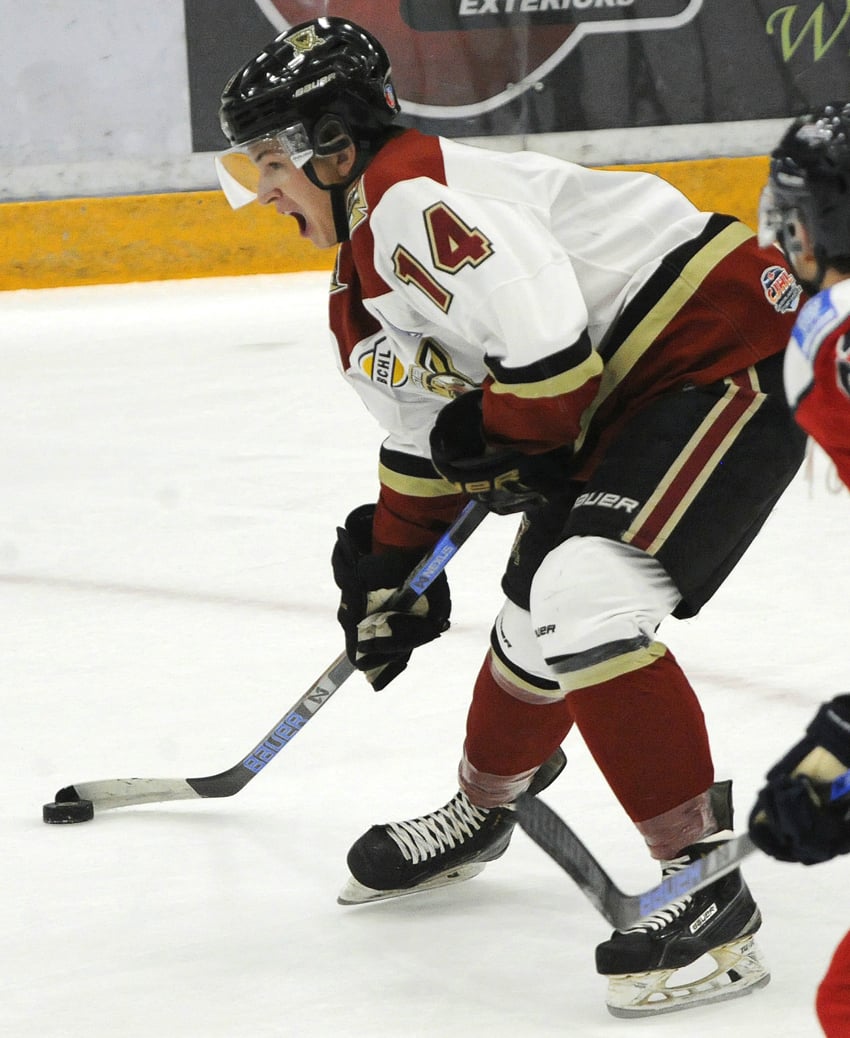 Ferster had emphasized to his Interior Division third-place team that it needed to come out quickly against the northern visitors.

“While we didn’t lean on the fact they (Spruce Kings) were probably a tired team, we wanted to come out forechecking hard, and I thought we did that well,” said Ferster. “We played a good hockey team today. They’re very good defensively and not easy to play against. They certainly didn’t look like a team playing their third game in three days.” 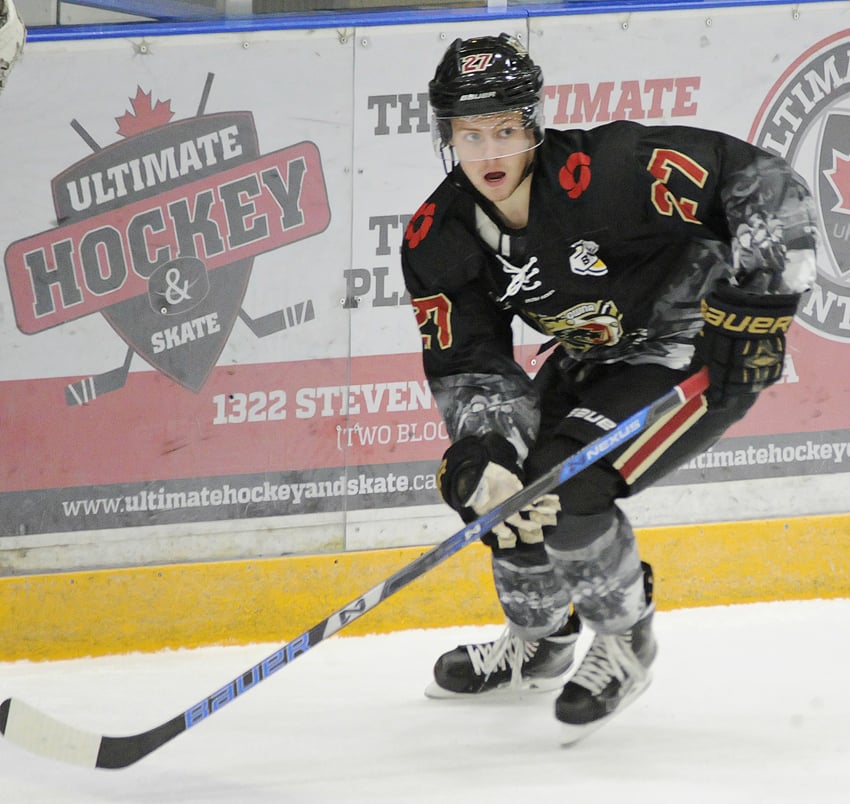 Cullen, playing in his third game since coming to the Warriors from the Western Hockey League’s Calgary Hitmen, scored his third goal by chipping the puck off the boards by a Spruce King defender at the Warriors’ blueline to force a two-on-one break with Marino. Cullen fed a pass to Dhaliwal who returned it quickly and deftly for the scoring play at 5:24.

Stevenson doubled up the Warriors’ advantage on the powerplay at the 12:56 mark of the first frame after a nice tic-tac-toe passing play. Dhaliwal got the puck down low for Dubois as he centered to the left faceoff circle for Stevenson who fired the puck past Bradley Cooper on the blocker side. 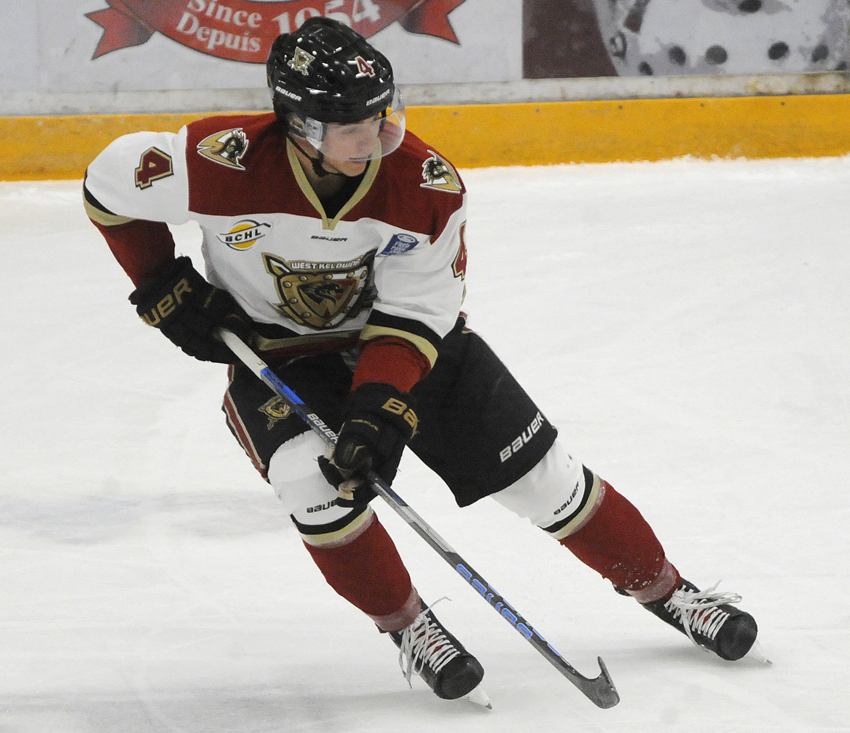 Just 59 seconds later, on another Warriors powerplay, the Spruce Kings struck shorthanded at the 13:55 mark of the first period as Kyle Johnson tapped in a puck from the crease on a pass from the corner.

The Warriors started the second period with lots of jump and it resulted in a goal just 35 seconds in as Lombardi tucked in a wraparound to restore a two-goal advantage for the Warriors. 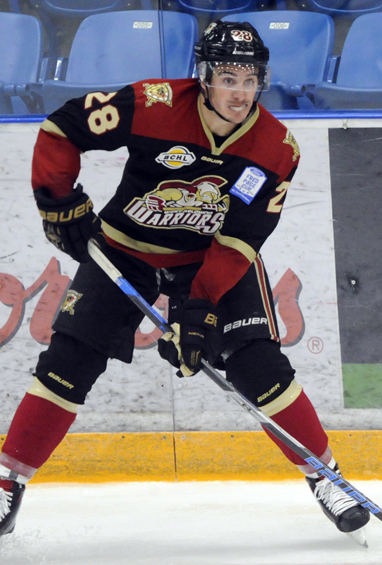 The Spruce Kings again were able to get the game to within a goal as Dustin Manz converted from the right face-off circle on a similar play to the Warriors’ second goal.

Early in the third period Jared Marino scored his seventh goal of the season on another powerplay, converting a Dhaliwal feed from below the goal line and putting it past Cooper in the front of the crease.

The Spruce Kings, who despite the long road trip, outshot the Warriors 10-6 in the third period, got the game back to within one on a powerplay as Ben Brar fired a shot up and over the blocker side of the Warriors goaltender Cody Porter to make the final three minutes interesting.

Prince George pulled goaltender Cooper for a 6-on-5 opportunity but the Warriors defended the front of their net well and pulled off their 14th win in 23 games.

In all, the Warriors were outshot 37-31, but got a solid performance from Porter, who picked up his first win since being added to the roster earlier on the weekend. The 20-year-old played 117 WHL games with the Vancouver Giants and the Calgary Hitmen, while he started this season in the Quebec Major Junior Hockey League and got into two games with the St. John’s Sea Dogs before being released. 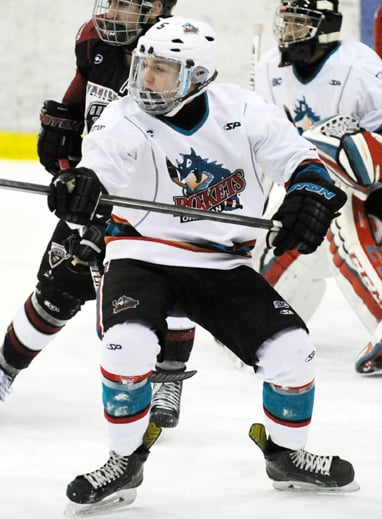 The Warriors have also acquired defenseman Spencer Hora from the Salmon Arm Silverbacks in exchange for future considerations. The 18-year-old rearguard is a veteran of 78 BCHL games, scoring one goal and posting 18 points.

To make room on the roster for the new additions, the Warriors have traded defenseman Nathan Reilly to the Whitecourt Wolverines of the Alberta Junior Hockey League (AJHL) in exchange for future considerations.

The Warriors have also placed forward Bennett Norlin on injured reserve after he was injured in the Warriors victory over the Salmon Arm Silverbacks on Wednesday.

Up next for the Warriors is a game in Vernon against the Vipers on Wednesday, while they take on the Penticton Vees on Friday at Royal LePage Place beginning at 7 p.m.

With Sunday’s win, the Warriors (14-9-0-0-1) sit in third place in the Interior Division with 28 points, six point behind Vernon and seven back of the Trail Smoke Eaters.