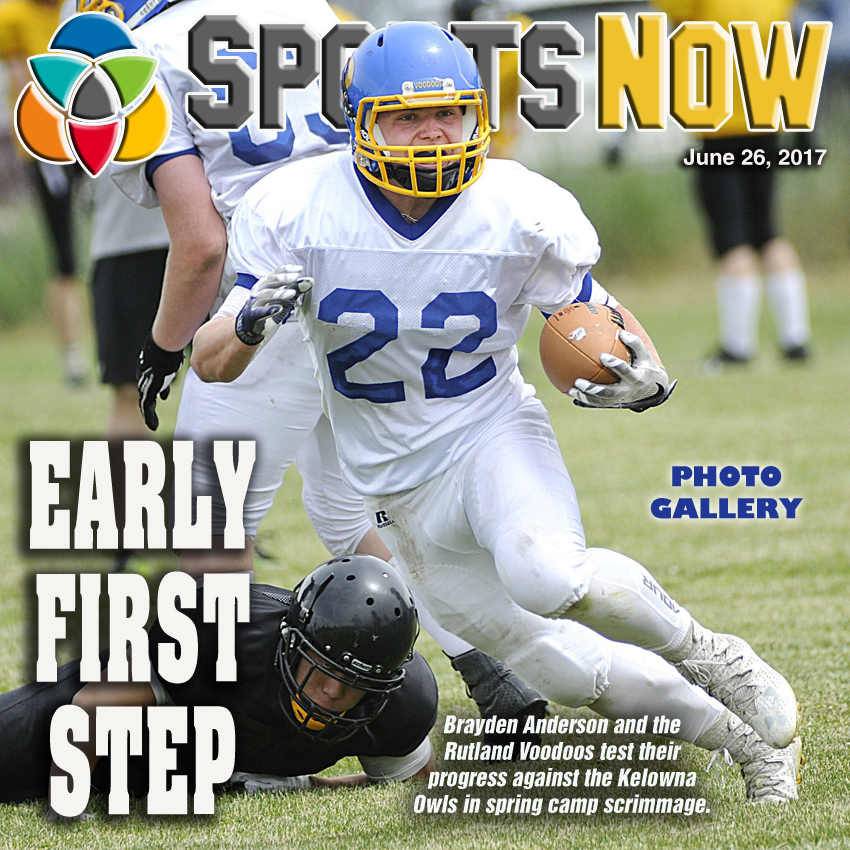 Following two weeks of spring camp and with a perennial burst of optimism, the Rutland Voodoos played host to the Kelowna Owls in controlled football scrimmages on home field recently.

And while both schools boasted increased numbers of players at the senior and junior levels during their camps, the focus was on establishing the type of teams they want to be. 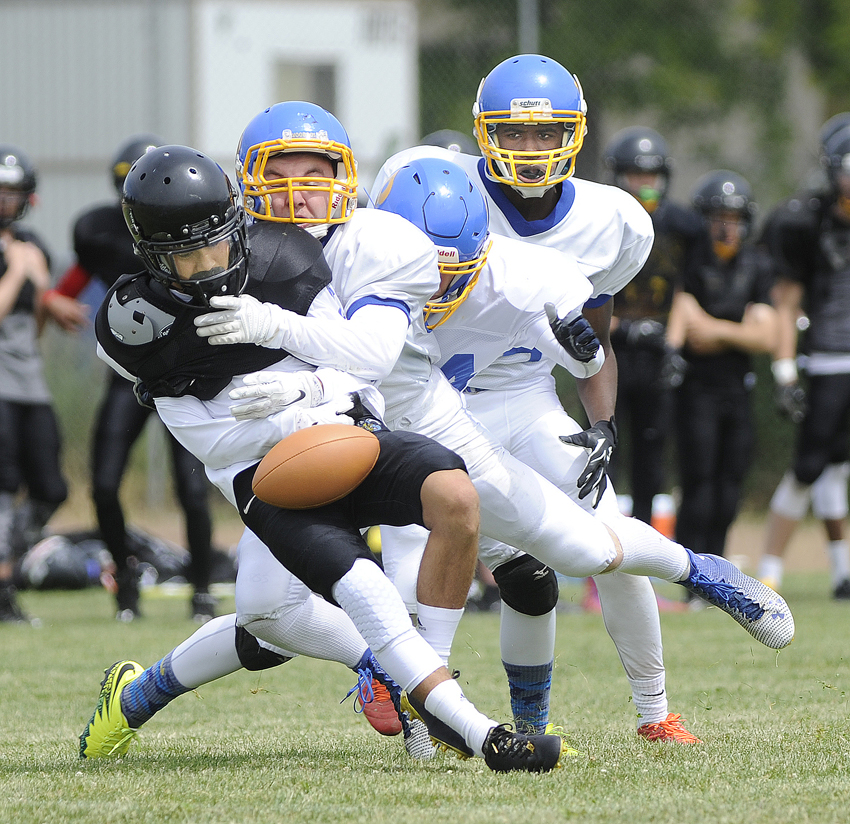 “We had a great spring camp,” said longtime Rutland head coach, Pete McCall. “We’re still cultivating our junior varsity program now that we have Grade 9 athletes in the school. We still need a few more, but we have some bright stars coming up.”

Chris Cartwright, in his second season as head coach with the Owls, said his players and coaches “learned a lot about how they needed to approach preparation for the coming season. 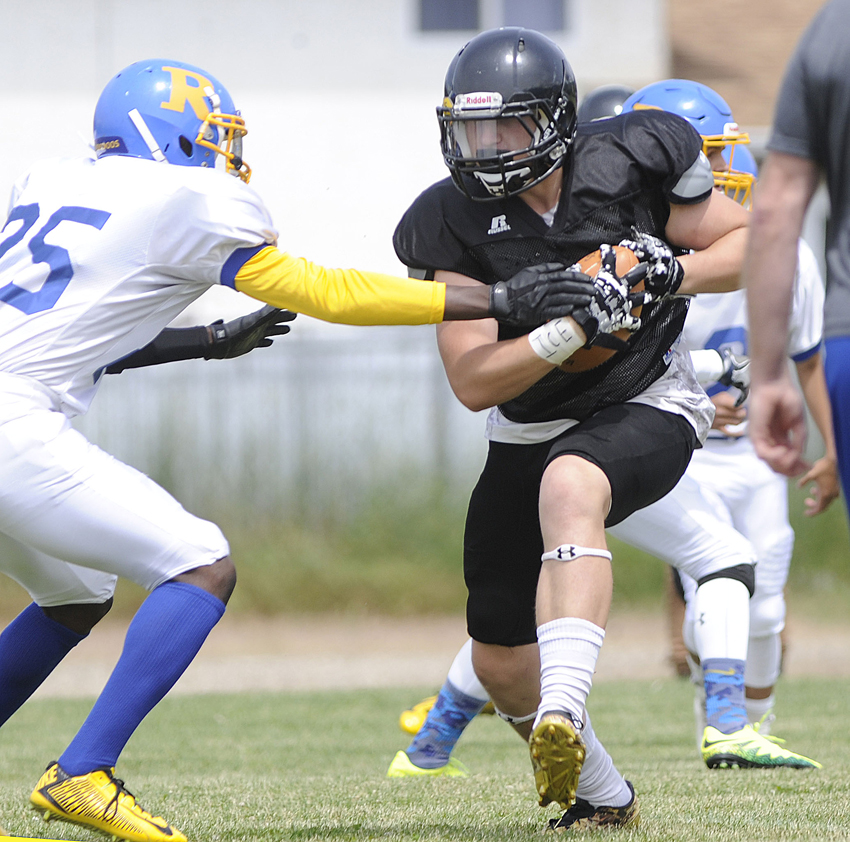 “This off-season we focused on establishing our culture,” he noted. “The jamboree gave us a chance to see how our systems are working and if we need to make any changes going into the fall.”

It didn’t take long for McCall and his coaches to find out their team’s strengths going into the B.C. Secondary Schools Football Association’s AAA division season.

“I don't think it will shock too many to say we are going to run the ball at Rutland this year,” said McCall, who established the RSS football program and beginning his 14th year as head coach. “We have some great running backs in our stable. Brayden Anderson, Matt Klak, Kyle Downer, Chase Schumacher and Jhavoun Blake will carry the load and no doubt will be major factors in our success.” 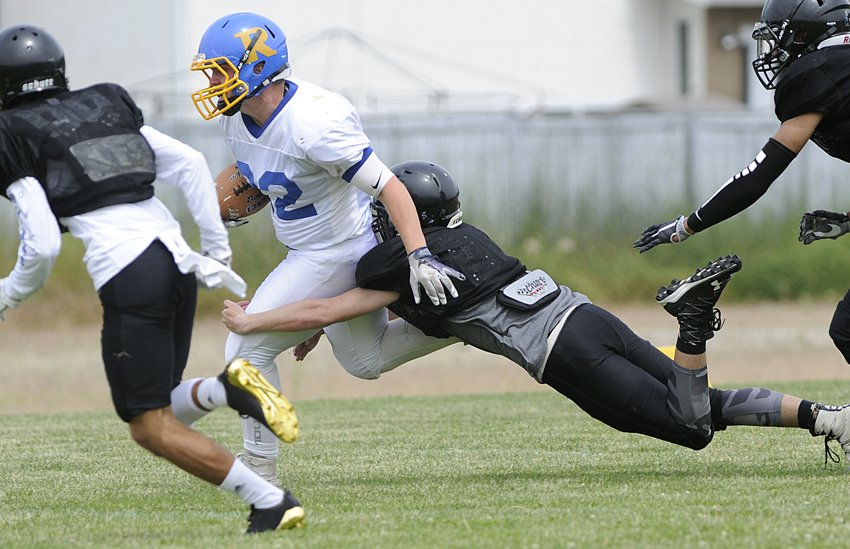 With 39 senior players in spring camp, Cartwright believes his options have increased in all areas of the lineup for the coming season while he’s especially upbeat about his revamped coaching staff that brings plenty of experience at the high school, university and professional level. 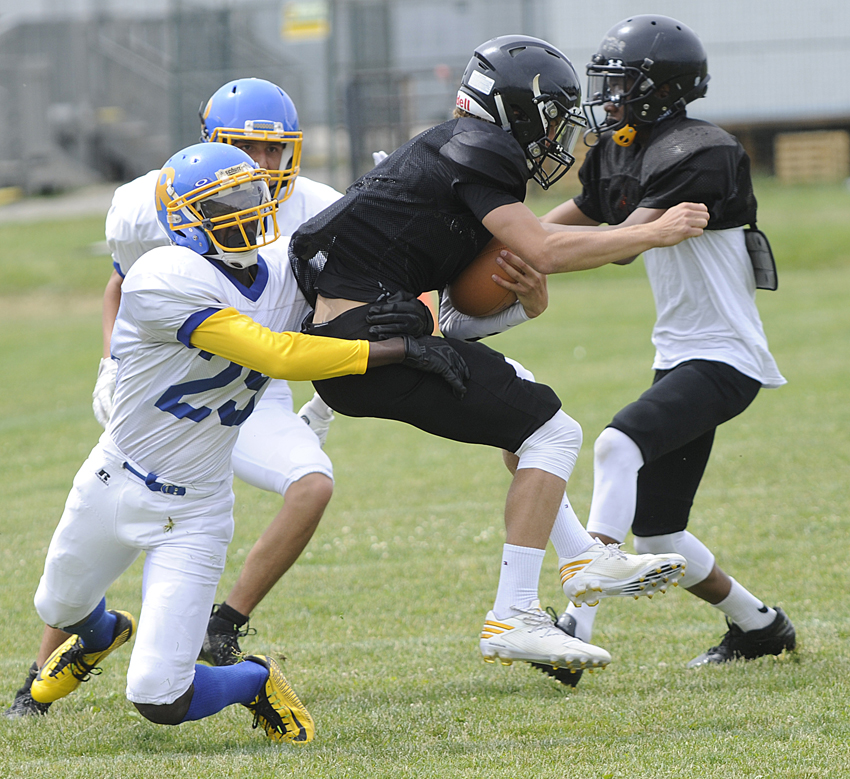 “It’s a really exciting time for the KSS football program and we’re looking forward to giving our players the opportunity to play against some of the most talented teams in the province,”

“Kendall brings a lot of experience, having worked with young athletes at different levels. We’re excited to have him help establish the consistency and culture we’re trying to create.”

The Owls will resume workouts later this summer and will have the South Delta team coming to Kelowna for joint practices. The senior team will travel to Mt. Baker, Wash. for an exhibition game while the JVs will be in New Westminster to play the Hyacks to kick off pre-season play.

First-place finishers in the Central Okanagan Youth Soccer Association’s regular season, the Kelowna Rampage added a U18 Kelowna Cup title to their resume at the Apple Bowl recently. 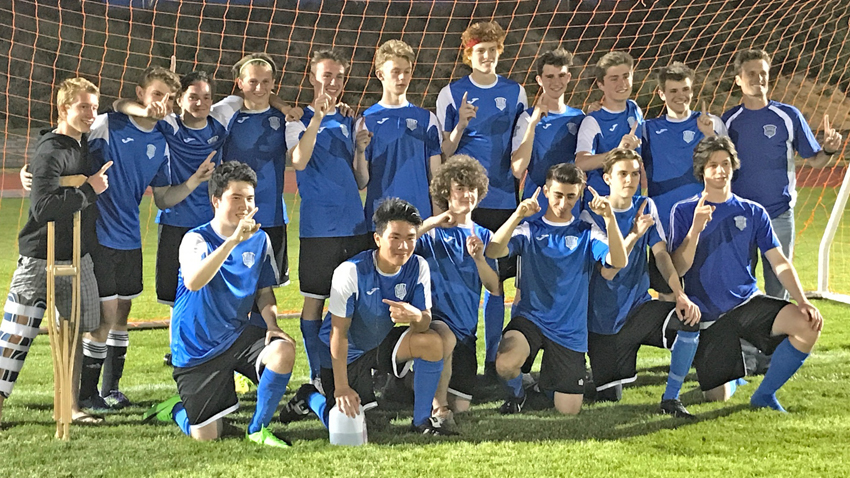 A 3-0 victory in the Cup final over Kelowna Youth Soccer Association-rival Venom climaxed the Rampage’s soccer career in COYSA.

Coming off a win over fourth-place Okanagan Mission Alpha Dental Strikers in semifinal play earlier in the day, the Rampage scored twice in the first half en route to the championship victory against the third-place Venom in the final. 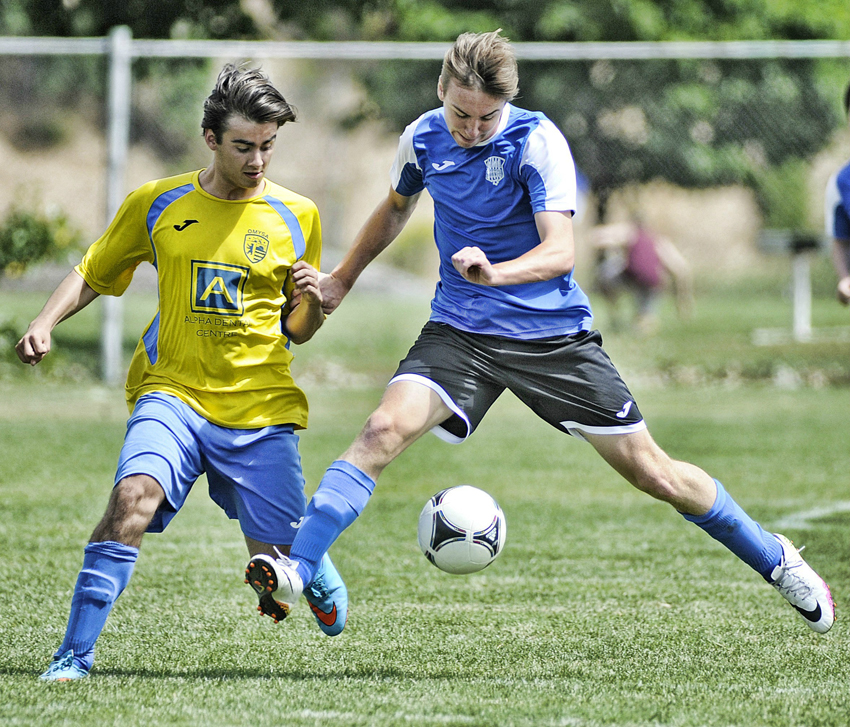 A well-timed pass by Liam Duckworth set up Grayson McMillan — the league’s leading scorer during the regular season — who went wide on Venom goalie Keaston Swaby and fired a sharp-angled shot to the far side of the net.

The Rampage kept up the pressure, with McMillan again getting into the act by crossing into the box and having Tyrell Farrell head it in for an insurance marker.

In the second half, Swaby and shutout goalkeeper, Michael McCreedy, were forced to come up with outstanding saves as both teams revved up offensively. Only Scott Freeman of the Rampage was able to capitalize on his scoring chance, beating a Venom defender and slotting the ball into the net on a breakaway. 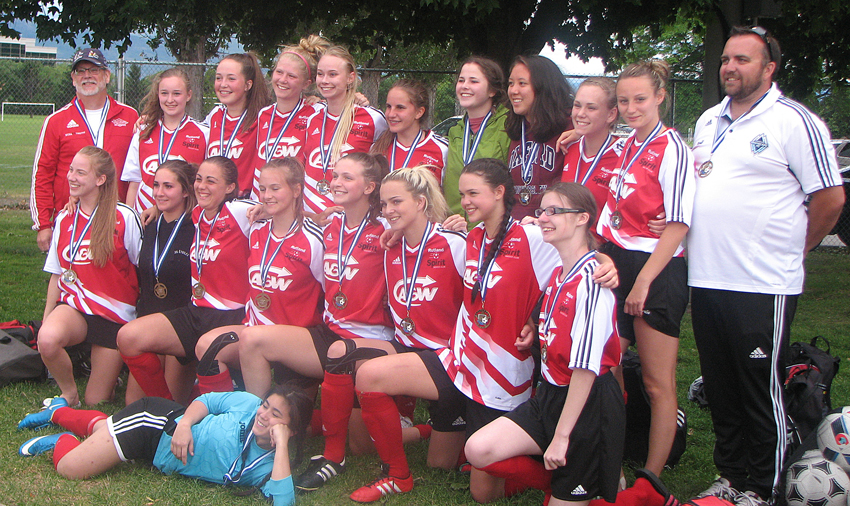 “It was an exciting way to close out the season and the boys’ final year in COYSA,” said Rampage coach Brad Farrell, who indicated he’ll try to form a Rampage-dominated team for the Kelowna Men’s Soccer League next season. “It was great to be able to play at the Apple Bowl in an all-Kelowna final against a team with which we had a great rivalry during the regular season. In a game late in the season, we had come back from a three-goal deficit to win 5-4.”

The Rampage had defeated Okanagan Mission 3-2 in their semifinal, with Braden Wong, Duckworth and McMillan scoring the goals for the winners. Mackenzie Bakala and Chris Foerderer replied for Mission. 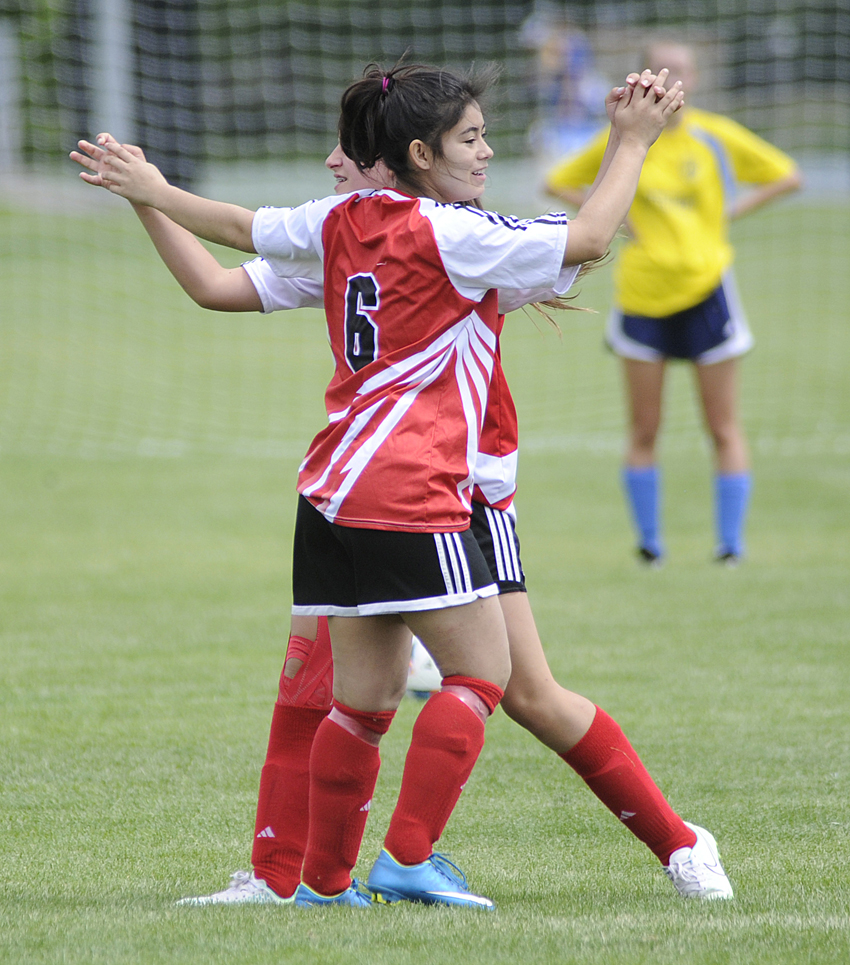 The Flames, first-place finishers in the regular season, edged the defending-champion Westside Youth Soccer Association United 3-2 in the final at the Apple Bowl after they had outscored the Okanagan Mission Tutt Street Optometry Storm 3-1 in semifinal play earlier in the day.

Westside earned its berth in the final with a 6-1 win over the Lake Country Sweet Legs Impact.

The Okanagan Athletics continued their winning ways in the B.C. Premier (Midget) Baseball League, but are still in a dogfight for a playoff spot going into the final two weeks of the regular season.

Three wins in four games over the host White Rock Tritons improved the Kelowna-based team’s record to 15-23 on the season (7-3 in their past 10 games) and kept them the final playoff spot (eighth place). However, the Athletics are just a half game ahead of ninth-place Coquitlam Reds and 1 1/2 games up on the Victoria Eagles. 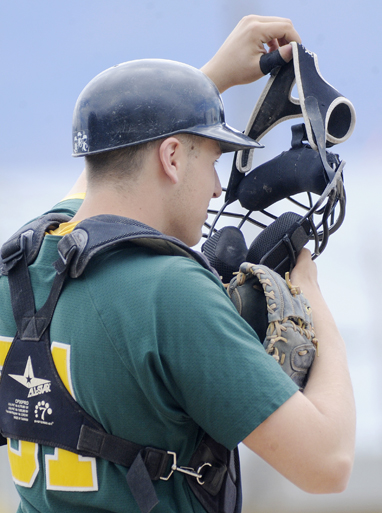 Although outhit by the Tritons, the A’s took advantage of six walks and three White Rock errors to post an 8-2 victory in their final game of the four-game weekend set on Sunday.

Three players — Colton Schaper-Kotter, Marcus Strother and Jaden Parsons — combined for the lion’s share of the A’s hitting in the finale, each collecting two hits. Schaper-Kotter and Strother both smacked doubles, while Brayden Beacom rounded out the Okanagan hitting with a run-scoring single.

Carter Morris went the distance (seven innings) to record his fourth win of the season. The Vernon product scattered eight hits, walked two and struck out one against the seventh-place Tritons, who dropped to 19-17, five games up on the A’s.

The Athletics opened the weekend by shutting out White Rock 6-0 on Saturday on the strength of another solid outing by pitcher Keaton Mandryk of Kelowna, who also recorded his fourth win of the season.

The righthander limited the Tritons to six hits and struck out nine while giving up only two walks over his seven innings of work. His teammates combined for 10 hits, two each by Dylan Faulkner and Schaper-Kotter. They also took advantage of four White Rock errors.

A second game on Saturday saw the A’s scrape together just five hits, but they jumped on three White Rock errors for three unearned runs on the way to a 4-3 victory. 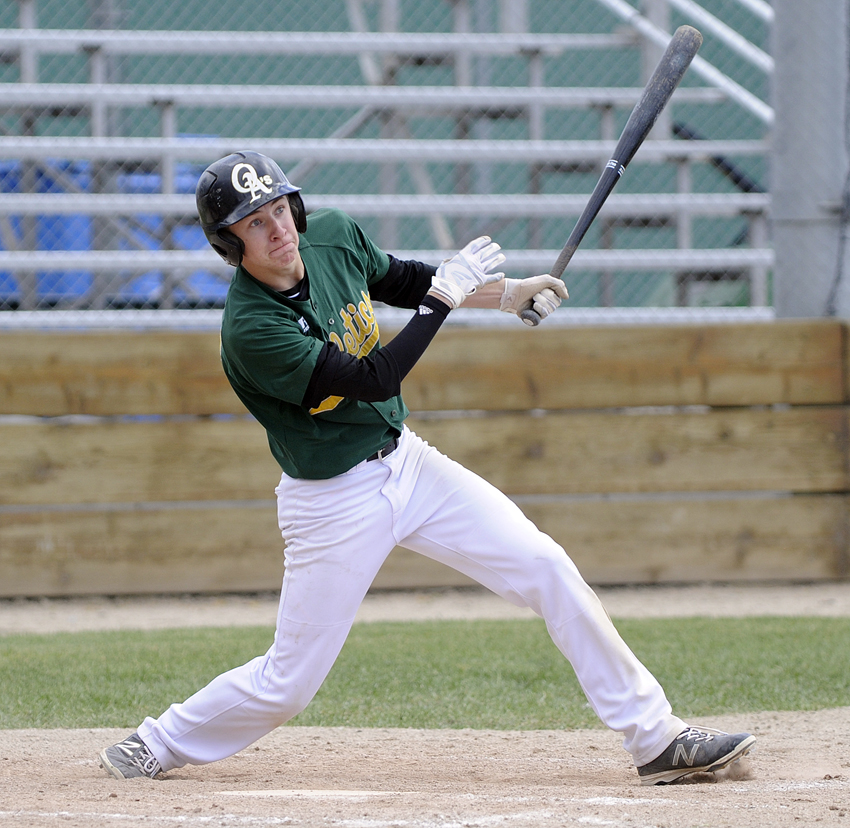 Luigi Russo of Kelowna led the Okanagan offence with a pair of hits while Parsons scored twice and hit a double as the A’s scored two runs in the third inning and added a run in both the fourth and fifth.

Kelowna’s Jackson Borne pitched 6 1/3 innings and allowed one earned run while striking out four for his fourth win of the season.

In their lone loss of the weekend, the A’s let a three-run lead get away as the Tritons scored four runs in the bottom of the seventh inning for a 7-6 win.

Borne was the leader at the plate in a losing cause, connecting for three hits (including a double), scoring two runs and driving in one. Adam Sarafinchan also doubled and contributed a pair of hits while scoring once and adding a run-batted-in.

The A’s have six games in which to hold on to at least the eighth and final BCPBL playoff spot. The first two games are in Delta on Saturday against the host Blue Jays who sit in 11th place with a 9-25 record. The Athletics close out the regular season with four games at home July 8 and 9 against the ninth-place Coquitlam Reds (11-20).