The West Kelowna Warriors fell to the Salmon Arm Silverbacks by a score of 2-1 Friday night.

The game didn’t appear like an even matchup on paper for the Warriors with most of their camp prospects in the lineup versus a Silverbacks squad that had half of their commits in the lineup, however it was the Warriors who were able to hold off the Silverbacks in the first period and keep it scoreless thanks to some power play opportunities and great goaltending from former Vancouver North West Hawk Jayden Shull. 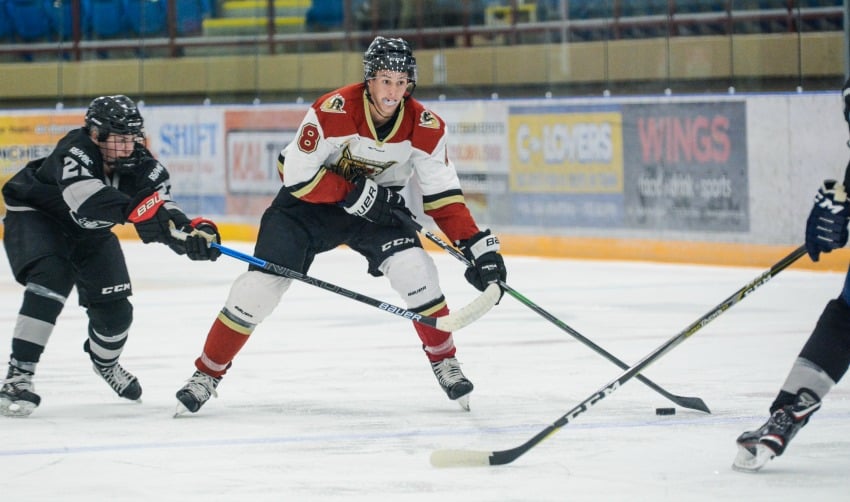 The second period started off with goal from Warriors defenseman Zander Lizotte off a sharp angle which hit the back of Silverbacks goaltender Tanner Martin’s leg and in to make it 1-0. Shortly later the Silverbacks would answer back with a goal from veteran Noah Wakeford to tie it up at one a piece. Things started to slow down again late in the second with both clubs unable to register a shot on goal for a full five minutes to finish the period tied up.

The Silverbacks started to utilize their veterans late in the game in the third period who put the Warriors under siege in throughout the final frame loading up on shots. One of them would eventually get past Warriors goaltender Johnny Derrick who came in the relief of Jayden Shull. It was a simple back hand shot by Silverbacks Jonathon Krahn that would go off the right pad and in to take a 2-1 Silverbacks lead. The Silverbacks would maintain puck possession throughout the third to hold on to a 2-1 victory. Shots on goal 37-18 in favor of the Salmon Arm Silverbacks.

The Warriors next Exhibition game is on the road versus the Salmon Arm Silverbacks. Puck drop 7:00pm from the Shaw Centre in Salmon Arm. This game will be streamed on Hockey TV and will be broadcast on the Warriors radio network on Mixlr.