Canada in for 'cold, harsh' winter – but most of BC forecast to be mild and dry

It’s going to be a cold, “harsh” winter for most Canadians – but not in British Columbia.

According to the Weather Network’s seasonal forecast, BC is in for a mild, mostly dry few months.

Temperatures are expected to be warmer than usual in the west of the province, while in the northeast and Southern Interior it should be about average.

The north coast, meanwhile, is expected to have above average rainfall and snow – but the south coast is forecast to have fewer rainy days than normal. 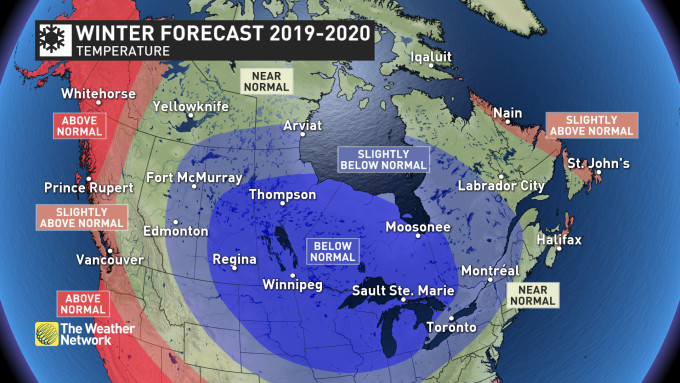 Weather Network meteorologist Dr. Doug Gillham added: “The dry pattern will break down at times with the potential to see several weeks' worth of precipitation in just five to 10 days.

“This should help the final precipitation totals approach seasonal.”

While on the surface the forecast appears to be bad news for the province’s skiers, Dr. Gillham offered hope.

“The periods of active weather should coincide with the periods of cooler weather, allowing ski areas to pick up substantial snowfall at times,” he said. 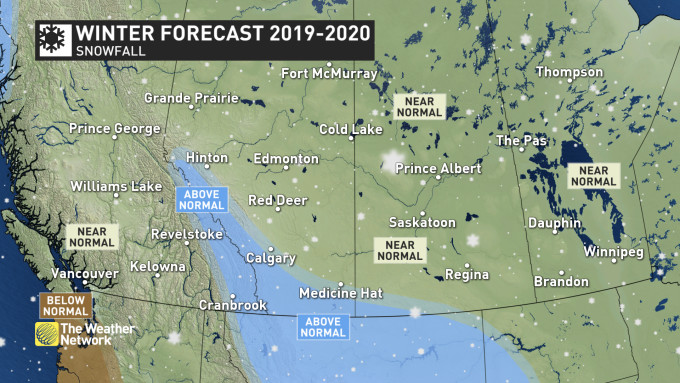 “Also, we do not expect the ‘Pineapple Express’ to be a regular feature of the winter, which will help to limit the threat of excessive rain in the alpine regions.

“Meanwhile, near normal to above normal snowfall and near normal temperatures are expected for the central and southern Rockies.”

November has already brought historically early snowfall in southern Ontario and power outages in the Prairies, setting what Weather Network chief meteorologist Chris Scott said will be a trend throughout the winter.

"The upcoming winter across the country looks to be more frozen than thawed, and we’ve already seen an early entrance of winter weather this fall," he said. 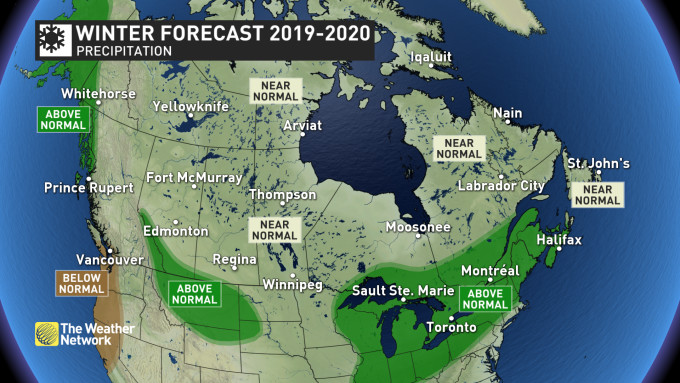 "The signs that we’re seeing this year do suggest we’re in for a winter that’s more on than off across the country — and that it’s going to be fairly long for many Canadians."

In Alberta, Scott said, there will be above−normal precipitation in the south, with especially frigid temperatures throughout the province.

The trend of a deep freeze will continue through Saskatchewan and Manitoba.

That’s especially the case in the southern parts of the Prairies, where Scott said he expects cold air to anchor down for the season.

From southern Ontario to southern Quebec, Scott said, people can prepare for a winter that’s colder than usual and has much more precipitation than normal.

He expects it to be stormy throughout Quebec and Ontario, but said that there will be a mix of precipitation. That means rain could often wash out snow after large dumps, and that there could be potential for icy conditions

"Once we settle into winter, it does not look like an early spring," Scott said, saying that winter in Ontario and Quebec will be a slog towards the end.

In fact, Scott said, all the provinces east of Manitoba will likely face a prolonged winter season. Spring weather is only forecasted to arrive in late March or early April.

In Atlantic Canada, Scott predicted it won’t be bitterly cold, but it will be a very stormy season.

"It’s going to be a real mess depending on where you are," he said.

There will likely be lots of snow in New Brunswick and Prince Edward Island, Scott said, while in Nova Scotia it will be a mix of snow, ice and rain.

In Newfoundland and Labrador, Scott said, snowfall will be average.

Scott said Nunavut and the Northwest Territories will likely experience average winter conditions, which bucks a recent trend of warmer−than−usual winters in the Far North.

"In years past we’ve seen the climate change signal where we get warmer−than−normal winters, and that’s something we’re going to see for years and decades to come," Scott said.

But he said that this year is an exception, especially because near the North Pole, colder air tends to trend near Nunavut as opposed to near Russia and Scandinavia.

But in Yukon, the winter will likely be warmer than normal, Scott added.

Yukon and British Columbia are also the only parts of the country where spring could show up early in 2020. Scott said the rest of the country should get ready for a harsh and prolonged season.