UPDATE: Relief for BC as weather warnings lifted, but flood warnings and evacuations remain

(UPDATE: Dec. 2 @ 10:45 am): Environment Canada lifted all weather alerts for British Columbia Thursday as storm conditions eased and floodwater receded, allowing for the reopening of Highway 1.

Crews in the Sumas area between Abbotsford and Chilliwack were taking down a portable dam set up across Highway 1 to hold back floodwaters in anticipation of the reopening Thursday afternoon, BC’s Transportation Ministry said in a news release.

The ministry said the highway just east of Highway 9 to Hope, was also expected to open Thursday.

The reopened highway sections do not fall under provincial travel restrictions but drivers are asked to travel only if necessary, the government said.

Despite the lifting of weather alerts, flood warnings remain in effect in many areas where snowmelt is feeding swollen rivers in southern B.C.

Weather and river experts have said conditions were expected to ease Thursday with the passing of the third in a trio of atmospheric rivers.

The River Forecast Centre also lifted all flood watches on Vancouver Island and the central coast, where it says rivers reached peak levels and are now receding.

DriveBC warns that highway conditions are dynamic after another landslide closed Highway 99 between Lillooet and Pemberton just hours after it was reopened Wednesday night.

New evacuation orders and alerts have been issued for properties outside Keremeos and Pemberton, while an evacuation order was downgraded to an alert for some parts of Huntingdon village in Abbotsford.

The Fraser Valley city shattered records in November, receiving 540 millimetres of rain, about one−third of its total average annual rainfall.

Mayor Henry Braun said officials are focusing energy on return−to−home plans for all displaced residents while keeping an eye on weather projections.

"Longer−term recovery of our community will absolutely need to be in partnership with the provincial and federal governments and will be focused on rebuilding our critical infrastructure to ensure we do not experience another event of this magnitude or worse," Braun said Wednesday.

"We simply cannot lose focus on the infrastructure upgrades that are required to keep our community and region safe going forward."

(Original story: Dec. 2 @ 5:05 am): Several rivers in British Columbia were under flood warnings on Wednesday as hundreds of homes remained evacuated because of heavy rainfall.

There were 12 evacuation orders involving 350 homes in the Fraser Valley Regional District in its coverage area from Boston Bar to Abbotsford.

Another 1,664 homes were on alert, most of them in Hatzic Valley, where numerous rivers and streams were at or near overflowing.

The Coquihalla River was one of several major waterways where the River Forecast Centre upgraded flood watches to warnings, meaning that river levels have exceeded their banks or will exceed them imminently, causing flooding of adjacent areas.

Flood warnings were also issued for the Chilliwack River, the Lower Fraser tributaries and the Tulameen, Similkameen, Coldwater and Lower Nicola rivers, as well as Spius Creek. 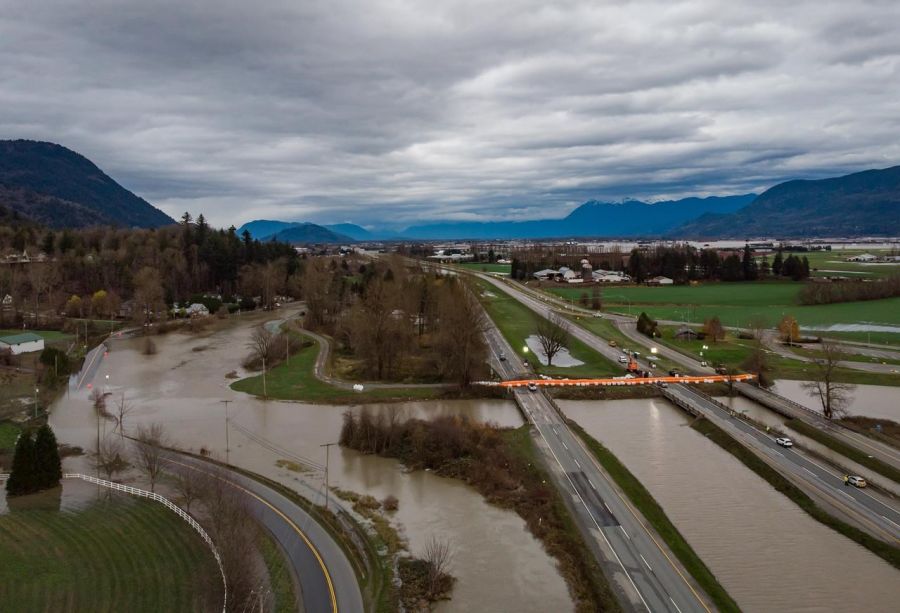 The flood warnings come as southern and coastal British Columbia entered the tail end of severe weather that meteorologists have described as a "parade" of storms with dozens of weather warnings in place across the region.

Armel Castellan, a warning preparedness meteorologist with Environment and Climate Change Canada, said fall’s floods on the heels of summer’s extreme heat is in line with expected trends.

"Unfortunately, this is consistent with what climate change has been projecting for all parts of Canada, including the mid−latitudes here in BC," he told a news conference Wednesday.

"It’s not to say it’s always going to be this extreme all the time, we will see lulls, of course. But the frequency, amplitude of these events, and their longevity individually, will continue to increase with the coming years and decades."

Public Safety Minister Mike Farnworth said while there was a lull in the weather Wednesday, residents of southwestern BC should prepare for more rain before an expected reprieve Thursday.

Abbotsford Mayor Henry Braun suggested conditions had stabilized in one of the hardest−hit areas of the province, although officials would be keeping a close eye and localized evacuation orders remained in place.

"If the weather continues to co−operate over the next few days, we hope to be able to start lifting these and potentially other evacuation orders in areas as they become clear," he said.

Environment Canada says the rain should ease on Thursday and Friday, but a smaller storm system is expected to affect the south coast of BC late on Friday.

The weather agency has lifted most of its weather advisories for the province as of Thursday morning, save for a fog advisory for Cariboo.

Sat
-1℃
Make Homepage Advertise with Us