Local Artists Donate Talent to Inn From the Cold Fundraiser

To my mind, a healthy arts and culture scene is indicative of the wider health of a community. In other words, if a community’s cultural scene is thriving, it’s highly likely that the rest of the community is in good overall health. With that in mind, it is fantastic to see a number of talented Kelowna artists coming together to help raise much needed funds for an important community service and excellent cause. Tomorrow evening, Inn From the Cold, a homeless shelter that is open through the coldest months of the year to help protect those without homes from the harsh elements, is hosting a fundraiser called “Night at the Inn (Inncluded).” 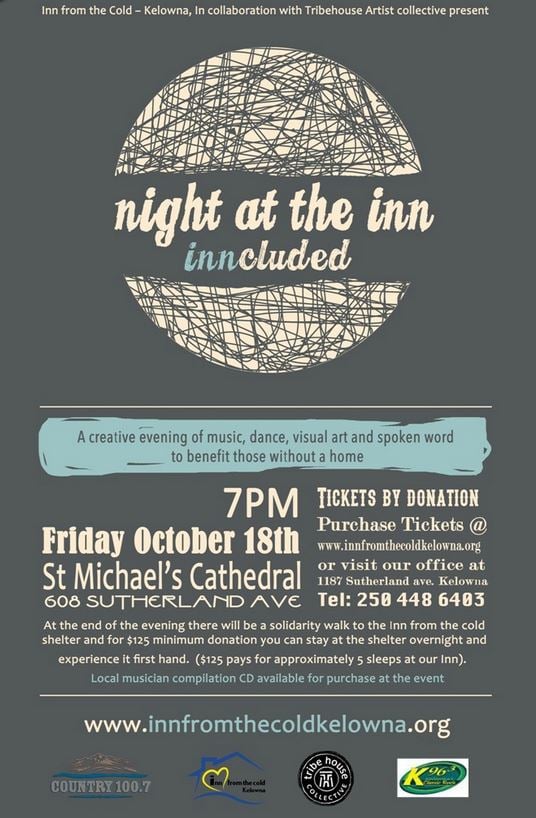 This year’s fundraiser, which is the shelter’s fourth annual, centres around the arts, with live musical performances from The Trips, Andrew Judah, JoyfulDoor, The Creeks, Jean Claude Tremblay, Mark Irving and more! In addition to the music, there will also be other art on display at the fundraiser, such as visual arts, dance and spoken word poetry. All of the artists, including the musicians, who are performing at the event are donating their skills and time to the fundraiser, meaning that all of the money raised from “Night at the Inn (Inncluded)” goes straight to Inn From the Cold.

However, the art, specifically the music, doesn’t start or stop with tomorrow evening’s fundraiser, because Inn From the Cold have partnered up with Tribehouse for the event. The Kelowna-based artist collective have put together a twelve-track compilation record called Inn Cluded. All of the songs on the album were donated by the musicians and, as with the entire event, all proceeds raised from the sale of the compilation record will go straight to Inn From the Cold. The album contains the work of the following generous musicians; Jimmy Balfour; Nico Boesten; The Creeks; Chloe, Kyle and Company; Corey Doak; Mark Irving; JoyfulDoor; Andrew Judah; Nuuka; Russ Rosen Band; Joshua Smith, and The Trips.

You can listen to the album, as well as purchase it, below:

“Night at the Inn (Inncluded)” starts at 7pm on Friday, October 18th and is being held at St. Michael’s Cathedral (608 Sutherland Ave.) Ticket prices start at $15 (minimum suggested donation). You can find out more about the fundraiser, ticket package options and where to buy your tickets HERE.


This Friday, enjoy an evening of the arts while benefiting a great cause!

Do you want to contact Vince? E-mail him at: vincent@kelownanow.com or connect with him on Twitter, Google+ or LinkedIn. You can also catch Vince talking music on CBC Radio West as an on-air music columnist.

Fri
11℃
Make Homepage Advertise with Us

Jewellery store calls it quits because of COVID

Here’s everything coming to Disney Plus in March 2021