Ponderosa Arts & Music Festival 2016 is just 11 days away. The all ages, independent fest takes place in Rock Creek, B.C. This year marks the fourth edition of Ponderosa, and 2016’s festival runs August 19 to 21.

This year’s lineup features everything from reggae to indie rock, and includes Timber Timbre, The Harpoonist & The Axe Murderer​, The Pack AD​, Black Mountain, Royal Canoe, Louise Burns, The Belle Game, Stickybuds and many more.

2015’s festival was cancelled due to a wildfire in the area - the Rock Creek wildfire, which was British Columbia’s largest interface fire of 2015. Festival founders, Kris Hargrave and Kia Zahrabi, have consistently made efforts to assist the fire victims, and in keeping with that, proceeds from this year’s ticket sales will be donated to the Rock Creek and Westbridge Needs fund.

You can check out the promo video for Ponderosa 2016 here:

Ponderosa prides itself on the concept that it “is not your typical festival. It remains proudly independent, intimate, affordable, and extremely fresh.” Festival goers will enjoy 25 musical performances, access to camping, access to swimming in the Kettle River, hot showers, morning yoga, pancake breakfasts and a whole lot more besides. 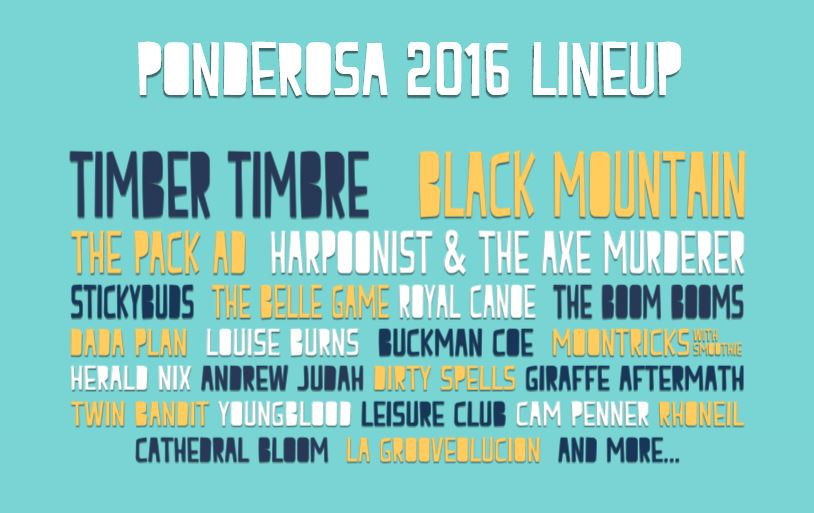 You can purchase tickets for Ponderosa Arts & Music Festival 2016 HERE. Weekend passes are $169 (plus taxes and fees).

Whether you have a band or show tip, need help booking music for an event or simply want to chat, feel free to email Vince at: vince@kelownanow.com or connect with him on Twitter, Google+, LinkedIn or Instagram.