Retirement just isn’t that much fun according to well-known businessman Gordie Abougoush. After five years of retirement, Gordie has decided to go back to work and has opened two new auto body repair shops at 455 Banks Road. Scratch King Automotive Body Repair and Dent King Paintless Dent Repair are located side by side in the same building and specialize in spot/minor body and paint repair and paintless dent repair. They also have three mobile vans and a full staff. The company does not do ICBC or other insurance claims or any other heavy collision work. Ironically, where Scratch King and Dent King are now located is the same address where Gordie opened his first body shop in 1988 named Crossroad Collision. His team includes Todd Enns and Clint Frey with Kerri Holtz in the office and estimates. Marcel Guenette and Dylan Goodwin are in the paint department and Alex Graham and Cassidy Gilfillin are body men. www.dentking.ca; www.scratchking.ca 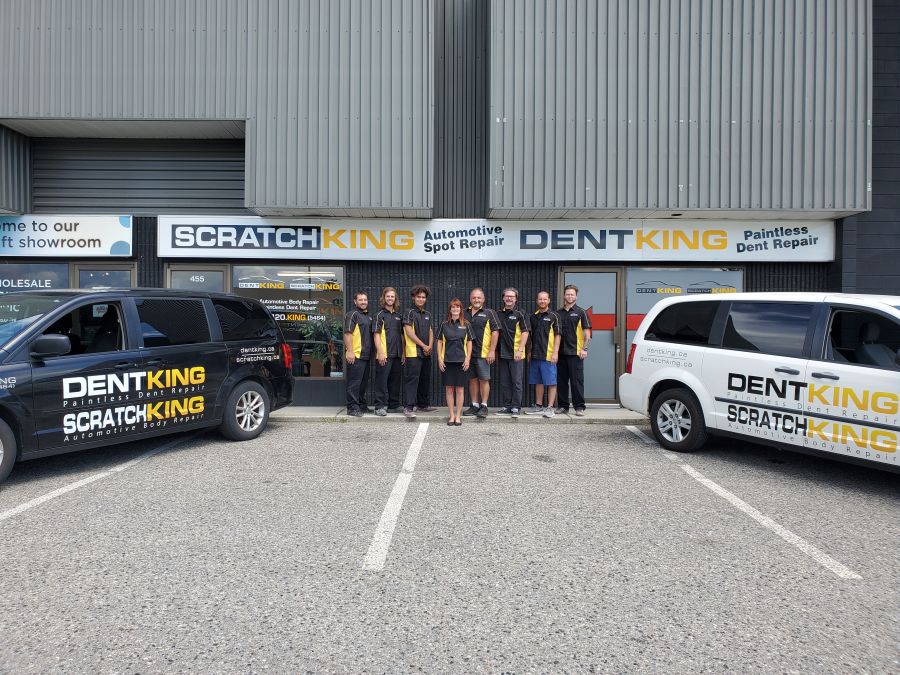 Orchard Park Shopping Centre has several new stores. Fortuna Gelato/Espresso/Desserts has opened with owners Alessandro and Alana Settimi. Alessandro opened his first gelateria in Florida, then moved to Toronto and opened two locations called the Mad Italian Gelato Bar. After opening seven locations in the USA, Canada and Europe, he has now launched in Orchard Park. Fortuna offers 24 flavours of artisan, Italian treats and premium espresso drinks. The gelato is made on-site using locally sourced ingredients and comes in dairy-free and sugar-free. www.fortunagelato.ca

BLVD Shoes in Orchard Park is owned and operated by Rob and Sena Cronkite. Relocating from Vancouver, the Cronkite’s bring over 15 years of fashion footwear experience with them and BLVD is building a home for the style-conscious. Their goal is to find your match what breaks through the expected, the usual, and the norm. BLVD are hunters of the new, iconoclasts of style and purveyors of the fashion-forward. Some of the brands they carry are Michael Kors, Free People, Cole Haan, Pegada, Sperry, Lemon Jelly and Kendall and Kylie. BLVD also retail handbags. www.blvdshoes.ca

Leon’s has opened in Orchard Park next to Mark’s. A. Leon Company started as a general merchandise store in Welland, Ontario and today is one of Canada’s largest retailers, selling a wide range of merchandise including furniture, major appliances and home electronics across multiple banners. The company continues to be run by the Leon family and employs over 10,000 associates in their network of corporate and franchise stores throughout Canada. 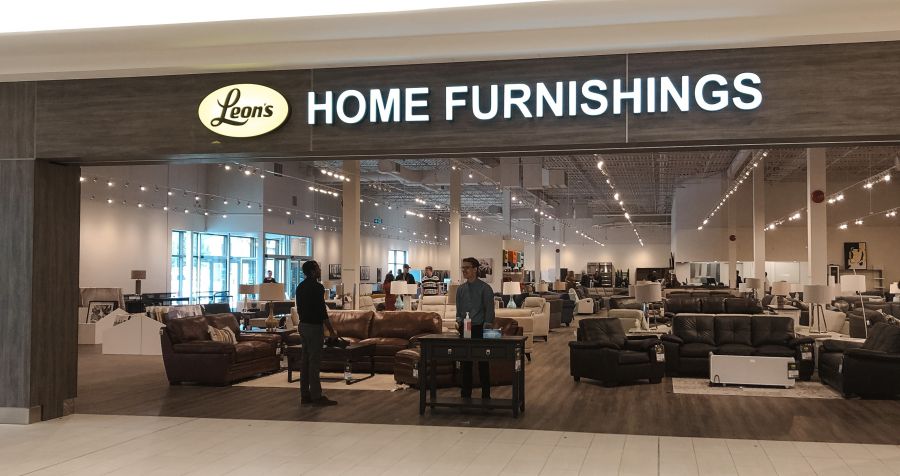 Okanagan College is bestowing its highest honour on five notable residents of the region, each of whom has made unique and meaningful contributions through education, public service, mentorship and philanthropy. Congratulations to Pamela and Wilfred “Grouse” Barnes (Westbank First Nation), Robert Foord (Kal Tire), Louis Thomas (Neskonlith Indian Band), and Don Turri (Crowe MacKay LLP) who have been selected by the College as its 2020 Honorary Fellows. www.okanagan.bc.ca

Isabey Interiors has opened FURNISH at 464 Adams Road. Isabey Interiors is the parent company of FURNISH, which is a home décor shopping experience. Owned and operated by lead designer Trish Isabey, FURNISH is bound to elevate the home décor and furnishings shopping in Kelowna. The shop is a curated collection of home décor, all things kitchen, bath, bedroom and more. They offer décor accessories, throw pillows, area rugs, statues, vases, tableware, dishes, wallpaper, mirrors, baskets, lamps, bedding, planters, cutlery, glassware, towels, linens, full bath lines and body products. Isabey Interiors is one of the largest design firms that can also help you for your design needs. Their team consists of designers and retail therapists. www.isabeyinteriors.com 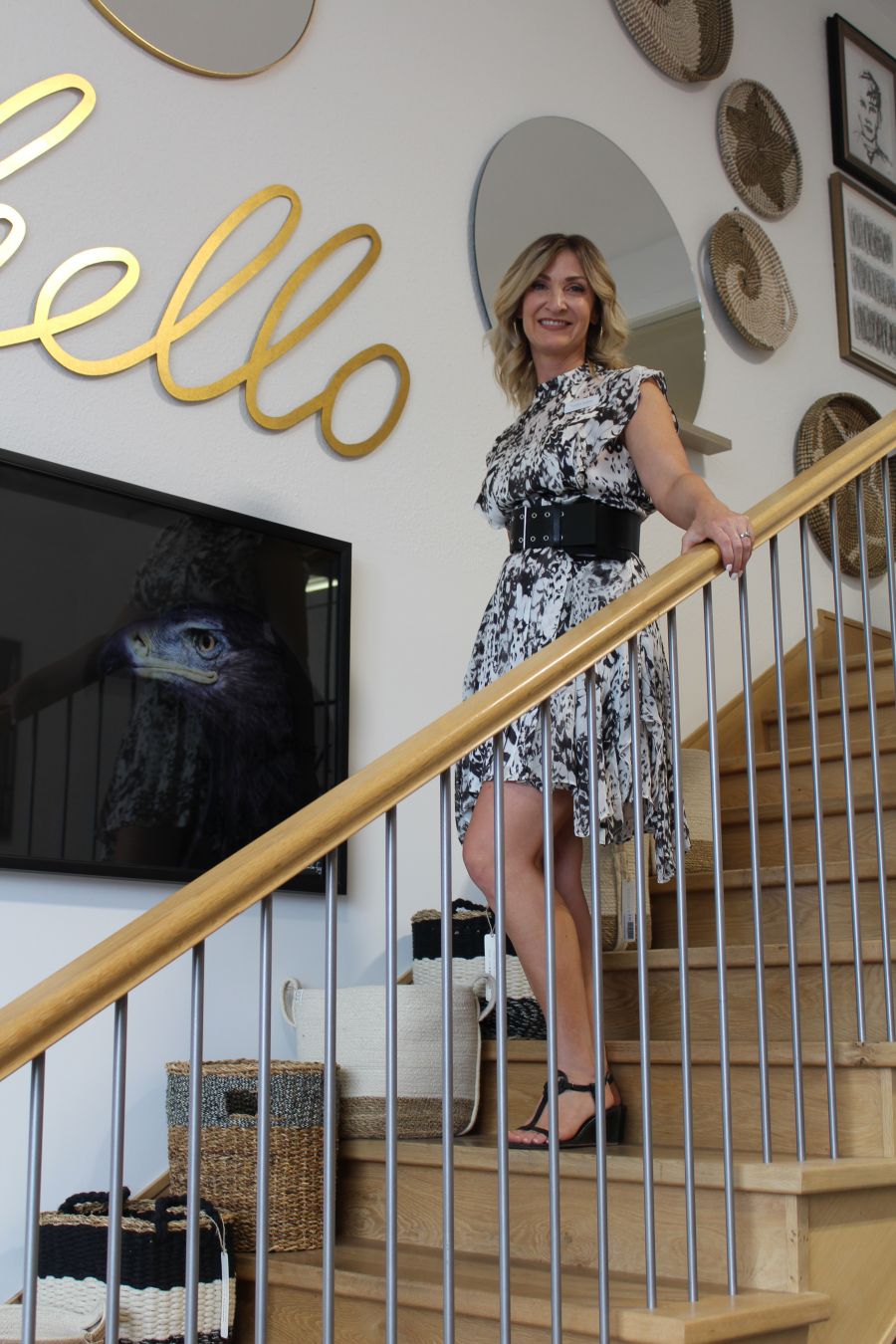 Francisco Vasquez, CPCA is a new Advisor at Sun Life Financial at 2139 Springfield Road. Francisco is originally from Chile, coming to Canada in 2017 and now in Kelowna for 1-1/2 years. He specializes in wealth management. Francisco.vasquez.villanueva@sunlife.ca

After six years at Okanagan College, Dennis Silvestrone, PhD, Director, Continuing Studies and Corporate Training is moving on. Dennis is embarking on a new adventure as Dean of Faculty of Business and Professional Studies at Capilano University. dennissilverstrone@capilanou.ca

If you are looking to purchase some traditional Ukrainian Food, the Ukrainian Catholic Church is selling their home-made perogies, cabbage rolls and Kovbasa sausage. Pick up at Marie Shandalla’s Earthly Creations Floral at 2630 Pandosy Street.

Scott Simpson has aced his first hole-in-one at the Harvest Golf Club, Hole #4 – 170 yards. He says it only took him 36 years of trying. Jeff Hudson of HM Commercial was a witness.

After writing about Dr. Kim Christie, PhD and Okanagan Clinical Trials in a previous column, I decided to book a memory assessment for myself. Okanagan Clinical Trials is a medical research centre that provides free assessments to anyone looking to get a baseline of their cognitive function. I was skeptical at first, but then I thought why not? I was pleasantly surprised by the experience. It was both insightful and informative. The 60 minute assessment is facilitated by Clinical Research Coordinators who ask participants about their medical and memory history and then perform two standardized cognitive tests. The results are reviewed with you and provide an explanation of what the scores are. You can have them forwarded to your physician. I learned a lot about my memory and was actually surprised how I scored. Since I have attended the session, several friends and colleagues have made appointments and had the same positive experience as me. There is no reason to be anxious about taking the test. It was actually a lot of fun. We check other medical conditions so why not check out your brain. www.okanaganclinicaltrials.com or 250-862-8141 for an appointment. 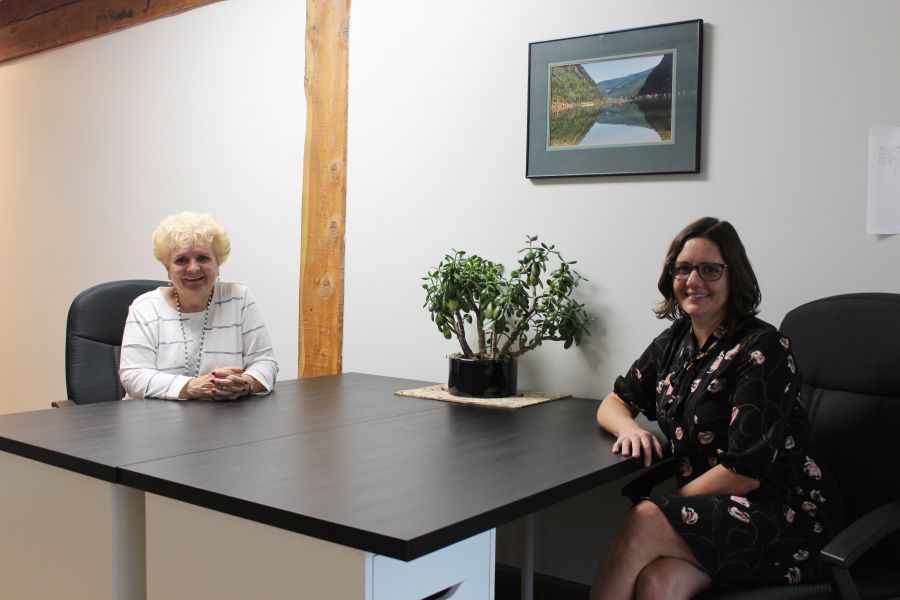 Randy Leslie of Kelowna Actors Studio has announced the cancellation of the final three shows of their 2019/20 season and postponed the launch of their next season which will begin in February, 2021 due to COVID-19. Unused tickets for Deathtrap, Gypsy and Grease are now being converted to credit for use on future productions. Visit www.kelownaactorsstudio.com