Justin Trudeau Promises to Renew Kelowna Accord if Elected

Liberal Party leader Justin Trudeau announced in Saskatoon on Thursday that if elected in the upcoming federal election, his government will establish a renewed partnership with First Nations.

Trudeau made the promise to renew the Kelowna Accord, which initially sought to improve the education, employment, and living conditions for First Nations people through government funding and other programs. The Accord was endorsed by Prime Minister Paul Martin in Kelowna in November 2005 but it was never endorsed by his successor, Stephen Harper.

“Canada only succeeds when we all succeed. Indigenous Peoples are the fastest growing segment of our population, and it is critical to our shared future that they have the same education and economic opportunities as everyone else. This must be a real priority for the federal government,” said Trudeau. “A Liberal government will immediately engage in a renewed, respectful, and inclusive nation-to-nation process to make important new investments in First Nations education and close the existing funding gap.” 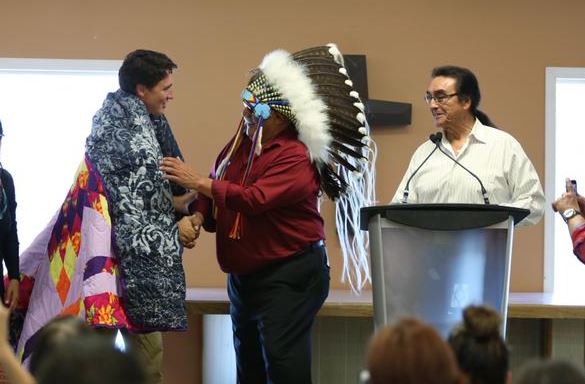 “We believe in First Nations control of First Nations education, with the federal government working nation-to-nation as a partner,” added Trudeau. “Closing the persistent and unacceptable gap in education and economic outcomes for First Nations requires real action, and only the Liberal Party is offering a plan that will deliver growth that works for everyone.”

The initial Kelowna Accord resulted from 18 months of roundtable consultations leading up to the First Ministers’ Meeting in Kelowna. At the end of the meeting the paper was released and it was seen as a critical step forward in a process of cooperation and consultation.