(UPDATE: Oct. 24 @ 11:30 am) - A lengthy court battle over a license plate has proven to be unsuccessful for a Manitoba man.

He was fighting for his right to use a personalized ASIMIL8 plate, which is a nod to the well-known saying by the alien race, ‘The Borg’, from Star Trek. 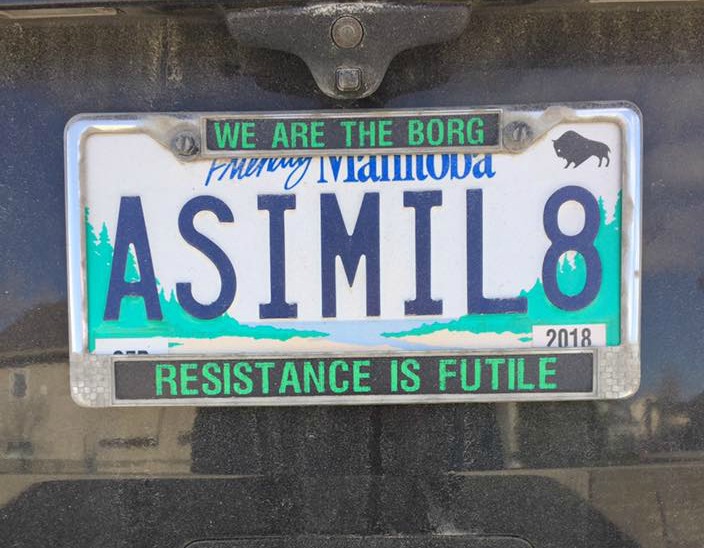 However, the plate was revoked by Manitoba Public Insurance in 2017 and he took the issue to court to try and get the plate back.

This week, a judge ruled that it was reasonable for the insurer to take back the plate because the word is connected to the Indigenous experience in Manitoba.

Troller originally got the plate in 2015 and put it inside a Star Trek themed border that stated: “We are the Borg” and “Resistance is futile.”

Nick Troller’s personalized ASIMIL8 licence plate was revoked by Manitoba Public Insurance two years ago and he’s battling in court to get it back.

His lawyer, James Kitchen, says Troller’s charter right to freedom of expression was violated when the plate was taken away.

Manitoba Public Insurance revoked the licence plate after receiving a complains that it was offensive to Indigenous people.

The plate is simply a nod to the well-known saying by the alien race, ‘The Borg’, from Star Trek.

Troller originally got the plate in 2015 and put it inside a Star Trek themed border that stated: “We are the Borg” and “Resistance is futile.”

Kitchen told a Winnipeg court that government opened up personalized licence plates to self expressions and they shouldn’t be arbitrarily censored.

Lawyers for Manitoba Public Insurance have not yet responded to those arguments, but in the past the insurer has said that licence plates can be recalled at any time because they’re government property.

With files from the Canadian Press. Thumbnail photo courtesy of Facebook.