(UPDATE: Aug. 12 @ 11:30 am): A man accused of killing a family doctor at a walk-in clinic in central Alberta appeared confused at his first court appearance, saying he doesn’t remember and is sick.

Deng Mabiour of Red Deer, Alta., faces a charge of first-degree murder in Monday’s death of 45-year-old Dr. Walter Reynolds, as well as other offences.

The 54-year-old appeared via a video link but wasn’t able to tell the judge if he understood the charges laid against him.

Mabiour kept demanding the judge listen to him and said he wants a doctor.

The matter was set over to Sept. 9.

The RCMP say it was not a random attack and the two men knew each other through the clinic.

(Original story: Aug. 12 @ 5:20 am): A man accused of killing a family doctor at a walk-in clinic in central Alberta is to make his first court appearance today.

Deng Mabiour of Red Deer, Alta., is charged with the first-degree murder of Dr. Walter Reynolds, a 45-year-old father of two.

The 54-year-old suspect is also charged with assault with a weapon and assaulting a police officer.

RCMP say it was not a random attack and the two men knew each other through the clinic.

RCMP received a 911 call Monday reporting an assault in progress at the Village Mall Walk-in Clinic just after 11 am. Mounties arrived within minutes. 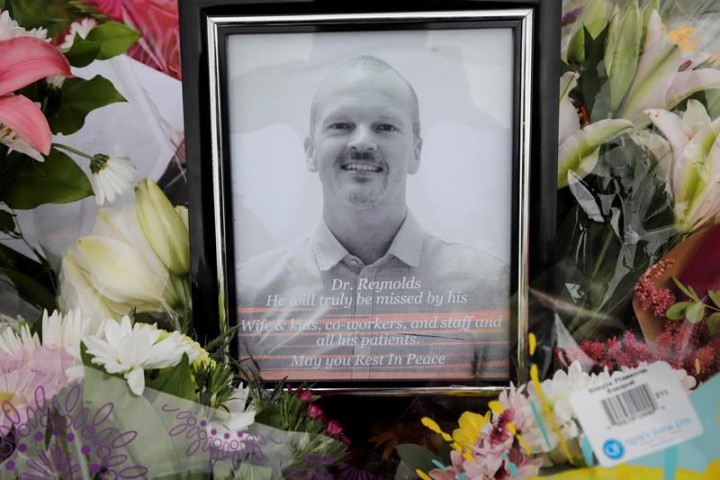 Reynolds was rushed to hospital, where he was pronounced dead. Grobmeier would not say what weapons were used in the slaying, but a witness told media outlets that a man had a machete and hammer.

Mabiour was arrested at the scene.

The attack in broad daylight in a medical clinic shocked many physicians.

“I think a lot of them are looking over their shoulder today and are quite anxious,” said Dr. Peter Bouch, who works at a different Red Deer clinic. Both he and Reynolds were originally from South Africa.

Bouch said physicians need to speak to the mayor and RCMP to figure out how to make exam rooms and offices safer.

Grobmeier said RCMP are willing to consult with doctors if they want to enhance safety protocols but he said attacks like this are rare.

“You just can’t overreact. This is devastating. There’s no doubt about it but this also is not the norm,” he said.

“I do want to assure the public that they are safe. This was not a random attack.”