Some older and uncommon bank notes will lose their legal tender status in a few years, the Bank of Canada announced.

The Government of Canada now has the power to remove legal tender status from bank notes—something it could not do before.

With this new ability, the government has decided to remove the legal tender status for older bank notes, dating as far back as 1935.

Removing legal tender status means that some older bank notes will no longer have the official status of being approved for payments of debt.

Essentially, says the Bank of Canada, that means you will no longer be able to spend that 1935 $25 bank note to buy items at a store, but these bank notes will not lose their face value.

If you have any of them, you will still be able to take them to your financial institution or send them to the Bank of Canada to redeem their value.

The bank said that the decision will have little impact on most people, because the bank notes haven’t been produced in decades and you rarely see them in circulation.

Some people may not even recognize them, which would mean they would likely not be accepted in transactions.

The Bank of Canada says that many other countries have been doing this for years.

More than 20 central banks around the world have the power to remove legal tender status from their notes, including the Bank of England, the Sveriges Riksbank (Sweden), the Swiss National Bank, the Reserve Bank of New Zealand and the European Central Bank.

“Having the power to remove legal tender status from bank notes means that we can do a better job of keeping the notes in circulation current,” they said. “Newer bank notes have better security features that make them difficult to counterfeit, and they are in better condition overall. Keeping notes current means they work more efficiently for all of us.” 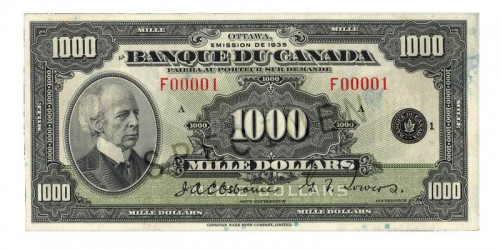 If you wish to redeem your bank notes, you can bring them to you financial institution or send them to the Bank of Canada. Alternatively, you can choose to keep the notes as a collectors item.