MacLean opened the intermission segment — the first since Sportsnet fired Cherry on Monday — by speaking alone on camera for nearly five minutes.

“We are all hurting. I have collapsed a 100 times this week, if not more,” MacLean said. “We are all disappointed. … I’ve sat all week long reflecting, listening to you (the viewer) — and I have heard you. I’ve reflected by listening to my own heart. … and I’ve struggled mightily to find the words.” 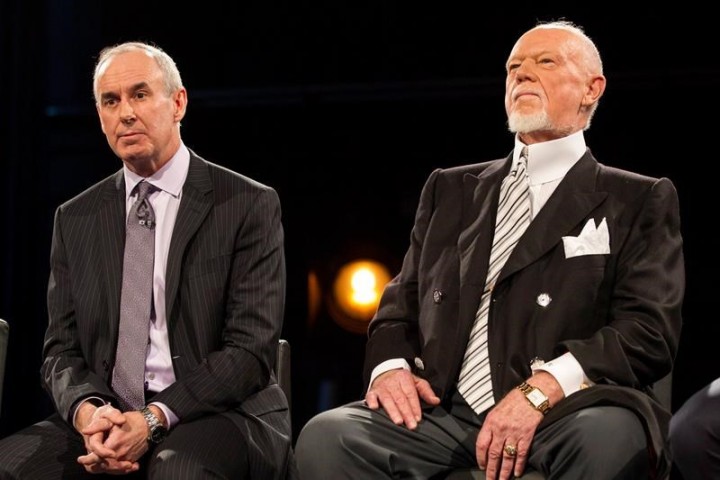 Sportsnet fired Cherry on Monday, two days after his on-air comments from last Saturday’s Coach’s Corner, which many felt were critical of immigrants for not wearing Remembrance Day poppies.

Cherry had singled out new immigrants in Toronto and Mississauga, Ont., where he lives, for not honouring Canada’s veterans and fallen soldiers.

Outrage over Cherry’s words mounted until his dismissal was announced. Cherry later denied he was singling out visible minorities.

MacLean, the longtime co-host of Coach’s Corner with Cherry, had apologized last Sunday for the comments and his lack of response. He reiterated that on Saturday night.

“I felt so bad and I apologized immediately. And Don, you know Don, defiant,” MacLean said. “There were steps that needed to be taken because of what had been said by Don. And he didn’t want to do those steps. So he made his choice and I made mine.”

MacLean also talked at length about his close relationship with Cherry but said he had to choose “principle over friendship.”

Wickenheiser also mentioned Cherry in that short, three-minute segment, saying she appreciated that “he was always talking about women’s hockey.”

Sportsnet called Cherry’s remarks from last Saturday “divisive,” and said they “do not represent our values or what we stand for” when announcing his firing on Monday.

Sportsnet also said earlier this week that they could eventually take the long-running Coach’s Corner segment in a different direction.

HNIC was a longtime CBC Saturday night staple, but the show and its games moved to Sportsnet when Rogers landed a lucrative long-term broadcast rights deal with the NHL that began in 2014. “Coach’s Corner” and HNIC are still broadcast on CBC in a sub-licensing deal with Rogers Media, which owns Sportsnet.

Cherry, a native of Kingston, Ont., joined HNIC in 1980 as a playoff analyst and was so popular that he was kept on as a colour commentator. CBC later created “Coach’s Corner” as a vehicle to showcase Cherry with MacLean eventually replacing Dave Hodge as his sidekick.

Known for his outlandish suits and thumbs-up gesture, Cherry occasionally weighed in on off-ice topics during his popular first-intermission program, and sometimes those views landed him in hot water.

The Canadian Broadcasting Standards Council said earlier this week it was so overloaded with complaints after last Saturday’s segment that it exceeded the organization’s technical processing capacity.