In an interview with Boston radio station WEEI on Thursday, Orr called the decision to sack his former Bruins coach “disgraceful.”

“I know Grapes better than anybody,” Orr said. “He’s not a bigot and he’s not a racist. This guy is the most generous, caring guy that I know. What they’ve done to him up there is disgraceful, it really is. It’s a new world I guess. Freedom of speech doesn’t matter.”

Sportsnet fired Cherry on Monday following his comments on “Hockey Night in Canada,” which many felt were critical of immigrants for not wearing Remembrance Day poppies. 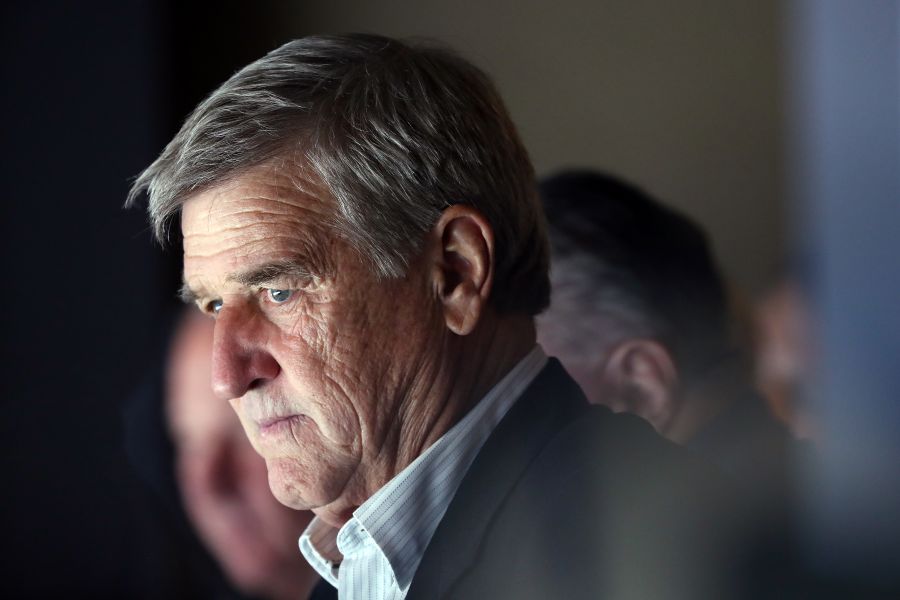 Cherry has denied he was singling out visible minorities.

Orr said he has talked to Cherry every day since the firing.

“He’s getting some nice calls from his friends here in Boston,” Orr said. “He is getting some wonderful support. He’s hurt, but he’s going to be fine.”

Sportsnet has not announced its plans for the “Coach’s Corner” segment. A message left with co-host Ron MacLean was not immediately returned.

The first “Hockey Night in Canada” since the firing is Saturday night.

Orr and Cherry have had a long connection, dating back to their days with the Bruins in the mid-1970s.

The two have been regulars at the Canadian Hockey League’s annual top prospects game since its inception in 1996, with the teams usually called “Team Orr” and “Team Cherry.”

Cherry’s name was mentioned in the March 2019 press release announcing the 2020 event. A CHL spokesman said in an email this week that coaches and rosters were still being reviewed for the Jan. 16 game in Hamilton, Ont.

His latest outburst about new immigrants not wearing poppies cost him his job, and in an interview late Monday night he wasn’t apologizing.

“I know what I said and I meant it. Still do. Everybody in Canada should wear a poppy to honour our fallen soldiers,” Cherry told The Canadian Press, saying Sportsnet fired him.

Sportsnet cut ties with Cherry earlier Monday, saying in a statement that following discussions with Cherry, it was decided it was the “right time for him to immediately step down.”

The network had already apologized Sunday for Cherry’s comments about his belief that new immigrants don’t wear poppies, and in turn, don’t support veterans. Sportsnet president Bart Yabsley said the comments were “divisive.”

“Sports brings people together — it unites us, not divides us,” Yabsley said in a two-paragraph statement that also thanked Cherry for his contributions to hockey and sports broadcasting in Canada.

Cherry, 85, had singled out new immigrants in Toronto and Mississauga, Ont., where he lives, for not honouring Canada’s veterans and fallen soldiers.

Outrage over Cherry’s words mounted until his dismissal was announced.

Cherry, however, denies he was singling out visible minorities.

“Irish, Scotch, anybody that’s newcomers to Canada, and they should wear a poppy to honour our dead from the past, whether they’re Scotch or Irish or English, or where they come from.

Cherry added that he could have stayed on “if I had turned into a tame robot who nobody would recognize.”

A hard-nosed career minor-leaguer who won coach of the year honours with the NHL’s Boston Bruins in 1976, Cherry moved in front of the camera in 1980.

Known for his outlandish suits and thumbs-up gesture, Cherry was liable to say anything during the popular first-intermission segment. Over the years, he occasionally weighed in with thoughts on off-ice topics that sometimes landed him in hot water.

“Hockey Night in Canada” was a longtime CBC Saturday night staple, but the show and its games moved to Sportsnet when Rogers landed a $5.2-billion, 12-year national broadcast rights deal with the NHL that began in 2014.

“Coach’s Corner” and HNIC are broadcast on CBC in a sub-licensing deal with Rogers Media, which owns Sportsnet.

“Don Cherry’s remarks on Saturday night were divisive, discriminatory and offensive and we respect Sportsnet’s decision that this is the right time for Don to step down,” CBC said via Twitter from its Hockey Night in Canada account.

“Don Cherry made remarks which were hurtful, discriminatory, which were flat out wrong … I owe you an apology, too. I sat there, did not catch it, did not respond,” MacLean said.

“Last night was a really great lesson to Don and me. We were wrong, and I sincerely apologize. I wanted to thank you for calling me and Don on that last night.”

The Canadian Broadcasting Standards Council said it was so overloaded with complaints about the segment that it exceeded the organization’s technical processing capacity. The CBSC said it was dealing with the broadcast under its normal process, but was not able to accept further complaints.

Cherry said he is receiving many phone calls and texts of support. He said he doesn’t have any immediate plans.

“I’m figuring out what I’m going to do with all my jackets,” he joked.

Shakir Mousa, who came to Canada from Iraq roughly 30 years ago, said earlier Monday he was hurt and disgusted by Cherry’s words and worried they could ignite hatred and discrimination.

Though he wears a poppy to mark Remembrance Day, Mousa said there are many ways to honour those who serve their country — like his son, who served in Haiti, Afghanistan and Iraq and just returned to Ottawa from his most recent deployment.

“I come from a dictatorship country,” the Montreal resident said. “There is a real appreciation for Canada and what Canada represents … I appreciate what democracy is and what liberty is and the freedom that we enjoy.

“I don’t need somebody like Don Cherry to tell me about it because he doesn’t represent the good side of Canada with comments like these.”

There was no immediate word on who might replace Cherry on “Coach’s Corner” or if it would continue in its current form. A spokesman said Sportsnet was “still considering options for our first intermission segment.”

The list of controversial Cherry moments is a long one.

In 1989, when asked about then-Winnipeg Jets assistant coach Alpo Suhonen, Cherry quipped that his name sounded like “dog food.”

Seven years later, Cherry lambasted Ottawa fans after they cheered for Russia against the U.S. in a World Cup of Hockey semifinal.

“Don’t do it again, it was a disgrace. If Saddam Hussein put up 1,000 missiles at our country, who would you go to for help? The Russians or the U.S.? Don’t do it again.”

Cherry was voted the seventh-greatest Canadian on CBC’s television project, “The Greatest Canadian,” in 2004. He finished ahead of Wayne Gretzky, inventor Alexander Graham Bell and Canada’s first prime minister Sir John A. MacDonald.

That same year, Cherry was publicly reprimanded by the CBC and subjected to a seven-second tape delay when he said only “Europeans and French guys” wore visors.

(UPDATE: Nov. 11 @ 12: 45 pm) - In an official statement from Sportsnet's president, Bart Yabsley, it was announced that Don Cherry has stepped down from his position.

The departure arrives following Cherry's comments on Saturday Night's episode of Coach's Corner, which Sportsnet is calling “discriminatory” and "offensive."

The statement begins with a heartfelt message about how sports are meant to bring people together rather than divide them before going into the details of Cherry's departure.

"Following further discussions with Don Cherry after Saturday night's broadcast, it has been decided it is the right time for him to immediately step down," reads the statement. Adding that his comments do not represent the company's values and what they stand for.

To finish off the news, Sportsnet thanks Cherry for his years of dedication to Canadian hockey. "Don is synonymous with hockey and has played an integral role in growing the game over the past 40 years. We would like to thank Don for his contributions to hockey and sports broadcasting in Canada."

The Canadian sportscaster is facing harsh scrutiny from users of the social media platform following Saturday night’s episode of Coach’s Corner and Cherry’s comments regarding immigrants and the purchases of poppy pins.

In a short clip of the episode shared by one Twitter user, Cherry uses the phrase “You people” when speaking about those who have migrated to Canada.

“You people love — that come here, whatever it is — you love our way of life, love our milk and honey, at least you could pay a couple of bucks for poppies or something like that,” said Cherry.

He goes on to say “These guys [veterans] pay for your way of life that you enjoy in Canada. These guys paid the biggest price.”

ICYMI here's Don Cherry being a POS by shaming immigrants for not buying poppies pic.twitter.com/kwTugoZGI6

Since the remarks were made, a number of upset Canadians have taken to Twitter to share their disappointment in Cherry, including the Mayor of Mississauga, Ont.

For @CoachsCornerDC to say that “you people” do not respect 🇨🇦 or our veterans is despicable. We’re proud of diverse cultural heritage and we‘ll always stand up for it. New immigrants enrich our country for the better. We’re all Canadians and wear our poppies proudly.

I'm done trying to explain to people like @CoachsCornerDC that yes we too are Canadian, and that "us people" also sacrificed for the same freedom for all, side by side with other brave soldiers, even though we ourselves weren't afforded the same opportunities and freedoms. https://t.co/bG4aj81xUY

Just realized my poppy fell off this morning. Am anxious to get a new one before Don Cherry has me sent back to where I came from. #youpeople

Perhaps it is just convenient timing or maybe it is a subtle dig at the incident, but the official Canadian Forces in the US account has shared a photo set that pays tribute to the honourable migrant soldiers who fought for Canada.

They fought to fight for Canada.

They fought for the chance to give their lives for Canada.

They fought for your right to choose.

Sportsnet released an official statement on Sunday morning condemning Cherry’s behavior and apologizing for his “discriminatory” and "offensive" comments.

Cherry has yet to comment on the situation through his own social channels.