A disturbing video of a disabled Canadian teen being used as a human bridge has advocates warning viewers the footage is part of a greater theme.

Brett Corbett, who has cerebral palsy, is seen laying in a stream as a classmate walks over the 14-year-old outside of a Cape Breton, Nova Scotia high school.

Gathering over 500,000 views, the video has since made headlines across the world and advocates say its a troubling example of how the lives of people with disabilities are often devalued.

“Sadly, young people with disabilities face a tough world, much harsher than it needs to be. They are no strangers to violence, and they share that with us on a regular basis,” said founder of Bullying Canada, Rob Benn-Frenette.

“Bullying often has long-term consequences that never abate. From first-hand experience I can tell you that nightmares can be part of your life well into your adult years, if not forever.”

While Corbett's mother says her son has forgiven the bullies who later apologized to him, the teen still feels unsafe returning to his high school.

Regional police are currently investigating the incident and the local high school will conduct a restorative practice process involving the school community, staff and parents. 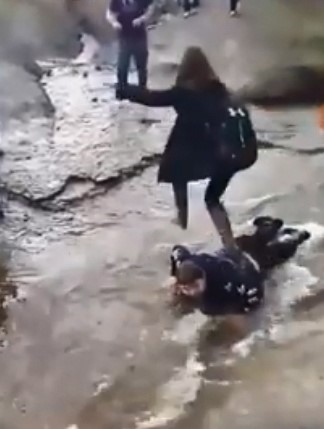 “The main takeaway is to be unafraid to intercede,” said Benn-Frenette.

“We must empower people to come forward. It’s the only way we’ll combat this issue.”

Special Olympics athletes and advocates in solidarity with Brett Corbett against bullying. https://t.co/14LjCg9jjt

A study conducted by Queen’s University found that more than half of bullying incidents stop within 10 seconds after a bystander steps in.