Hundreds of demonstrators took to the streets of Vancouver yesterday to protest against the death of a man held in custody by police in Minneapolis.

The crowd, which gathered outside Vancouver Art Gallery, chanted their support for George Floyd, the man who died, and the Black Lives Matter movement.

Tristan Miura, who held up a skateboard painted with the words “injustice anywhere is a threat to justice everywhere,” said he hopes Vancouver will reflect on the protesters’ message.

“Vancouver has always been quite liberal and very open about what they feel is wrong in the community,” said Miura.

TY #Vancouver for exercising your right to lawful #PeacefulDemonstration at the #VAG! #ProudCanadian

TY to our #VPD officers for your professionalism & committment to #CommunityWellbeing! #ProudChief

“I think Vancouver, as a whole, is taking this time to reflect on past issues and preventing further issues from occurring.”

Others hoped it would spark a larger reaction in Canada.

Vancouver police said there were no arrests during the event.

He added the hashtag “#ProudCanadian.”

In Montreal, meanwhile, a protest demanding justice for Floyd degenerated into clashes between police and some demonstrators.

Eleven people were arrested after tensions flared on Sunday.

While the formal rally took place without incident, the situation later degenerated when some protesters smashed windows and lit fires and were met with pepper spray and tear gas from officers.

Montreal police said nine of the arrests are for breaking and entering, one is for armed assault and one is for mischief.

They said they have received 70 reports of damage to stores and other acts of mischief, and more arrests could follow.

The demonstrators had gathered to denounce racism and police impunity following the death of Floyd, who died in Minneapolis on Monday after pleading for air while a police officer, who was white, pressed a knee on his neck. 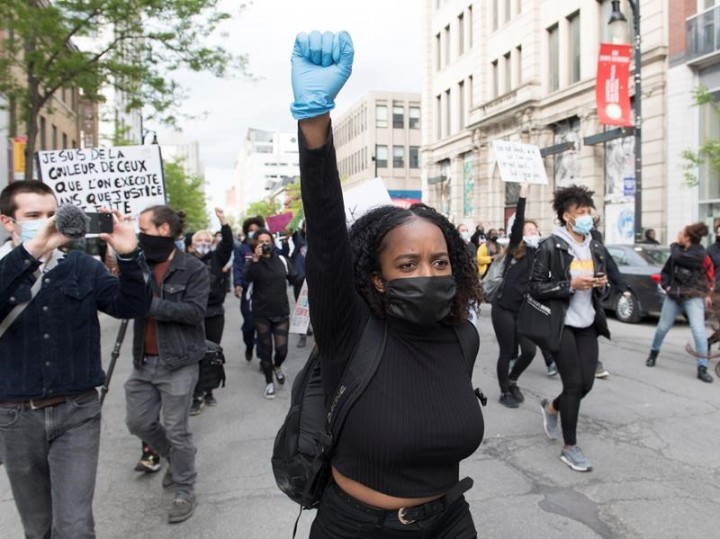 The officer has been charged with third-degree murder.

Montreal police declared the gathering illegal after they said projectiles were thrown at officers, who responded with pepper spray and tear gas.

“It’s important for everyone to be here today so that we can have a lot of voices to say the George Floyd event is not a singular event,” said Marie-Livia Beauge, one of the event organizers.

“It keeps happening and it’s happening here in Montreal so to be here together is to show solidarity and denounce the injustice."

Leah Blain, 20, chose to continue demonstrating and was part of a group trying to reach police headquarters when she was met with pepper spray.

“We were just standing here, we were showing our support and this is what happens, the police support a system that’s against us, so if you support them, you’re against us,” she said.

Due to the COVID-19 pandemic, organizers repeatedly told people to spread out, trying to find a spot where a two-metre distance could be maintained.

Dr. Horacio Arruda, Quebec’s director of public health, told Radio-Canada on Sunday evening that he recognized the importance of the cause but urged hand washing and for anyone exhibiting symptoms to let health authorities know they attended the protest.

Around the start of the demonstration, Montreal police took the unusual step of issuing a tweet saying they were dismayed by the death of Floyd.

“Both the action taken and the inaction of the witnesses present go against the values of our organization,” the force tweeted calling on for a peaceful demonstration.

“We respect the rights and the need of everyone to speak out against this violence and will be by your side to ensure your safety,” the police said.

The Montreal rally followed one in Toronto on Saturday, which remained peaceful.