Under a dark December night sky, a collage of photos taped to a billboard rests against a tree illuminated only by the light of a sea of candles.

Each of the photos depicts a smiling Morgan Harris at different points in her short life.

This is how Cambria Harris, 21, wants the public to remember her mother.

"I want her to be remembered as happy−go−lucky. She was silly. She was fun. People loved to be around her," she said Thursday evening during a vigil.

Winnipeg police say Harris, 39, is one of four woman allegedly killed by Jeremy Skibicki this past spring.

On Thursday, police announced Skibicki was charged with three counts of first−degree murder in the deaths of Harris, Marcedes Myran, 26, and an unidentified woman.

He was initially charged with first−degree murder on May 18 and kept in custody after the partial remains of Rebecca Contois, 24, were found in a garbage bin near an apartment building. Police later found the rest of her remains in a Winnipeg landfill. 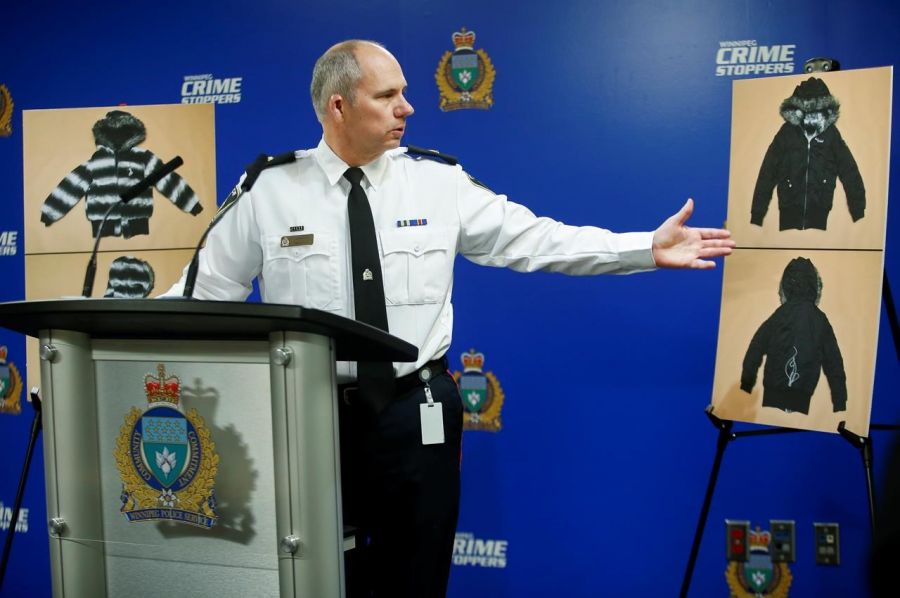 Contois lived in Winnipeg but was a member of O−Chi−Chak−Ko−Sipi First Nation, also known as Crane River.

The bodies of the three latest alleged victims have not been found.

Harris and Myran both lived in Winnipeg and were members of Long Plain First Nation.

Dozens of people gathered outside Skibicki’s residence to honour the four women hours after police announced the additional charges.

"I think it’s amazing that we’re able to come together like this, but I don’t think it should have to be like this. There comes a point where we have to say that this needs to stop," Cambria Harris said.

Harris was a mother of five and a grandmother to one. Police previously reported she was last seen on May 1. They said Thursday she was likely killed around that same time.

"I know that she loved her children and she did the best she could with what she had. I think about just how unfair that it ended like this," Kirstin Witwicki, Harris’ cousin, said during the vigil.

"She had the soul of a UFC fighter. She was fearless and scared of no one," she said.

Police said Harris, Myran and Contois were killed in May.

They said a fourth woman is thought to have been killed on or about March 15, 2022. They released a photo of a jacket similar to one she had been wearing.

"It’s always unsettling whenever there is any kind of a serial killing," said Winnipeg police Chief Danny Smyth.

"It does involve Indigenous women. We’re very sensitive to the whole missing and murdered Indigenous women investigation and inquiry and the recommendations that came out of that."

Smyth would not say whether the women were targeted because they were Indigenous.

Police released few details about their investigation, but said they have no leads to any other potential victims.

They said they are not searching the landfill for the bodies of the three women and would not say whether they were looking anywhere else.

Melissa Normand, another of Harris’ cousins, wants the police to change their minds.

"That’s unfair. Our family deserves to have Morgan back and placed at peace."

Investigators believe Skibicki acted alone and there is no threat to public safety.

"He was arrested as soon as we were aware of what was going on. He has been housed in a correctional facility since that time, and he has, not to my knowledge, been released at any given moment," said Insp. Shawn Pike.

"Anger and sorrow — that mix — is what I’m feeling right now, and I think that many in our city are going to be feeling the same," he said.

Community supports have been offered to both families, said Angie Tuesday, a family support and resource advocate with the police.

"This is a tremendously difficult time for both these families that we’re discussing today, as well as all the families of missing and murdered Indigenous women and girls and two−spirit and gender−diverse people in Manitoba. I want to let people know that we are thinking of you, and our hearts are with you at this time."

The Southern Chiefs’ Organization offered its condolences to the family, friends and First Nations of the victims.

"We will be keeping you in our thoughts and prayers as you grapple with the news that your loved ones have been taken from us in such a violent way," Grand Chief Jerry Daniels said in a statement.

After months of searching for her mother, Cambria Harris said the family is left to grieve again.

"I find peace and I find closure being able to be here today and say they did find something but we’re still not done."