(UPDATE: June 29 @ 10:30 am): New federal models show continued progress in suppressing the spread of COVID-19, but with significant hotspots.

The figures released by the Public Health Agency of Canada Monday show that some areas have been more heavily impacted by COVID-19 than others, specifically Quebec and Ontario.

The hotspots in the past few days include parts of Saskatchewan, Toronto, Montreal and around the border town of Windsor, Ont.

At this point, transmission of the novel coronavirus appears under control nationally with any fluctuations due to localized outbreaks, chief public health officer Dr. Theresa Tam said Monday.

She said that as restrictions ease, it will be even more important for Canadians to maintain physical distancing and good handwashing practices to keep case counts down to help with contact tracing and to not overburden the health-care system.

She said people under the age of 40 account for a greater proportion of cases after that has been steep declines in case numbers for people over 80 years old in recent weeks.

Prime Minister Justin Trudeau said Monday the restrictions Canadians have lived with through the spring have worked to get COVID-19 under control.

A new explosion in cases could mean a return to tight restrictions, he warned.

He said rising COVID-19 numbers in the United States demonstrate the need for continued vigilance north of the border, including keeping physical distance from each other wherever possible.

Trudeau also said federal officials will reduce the number of news conferences over the summer, but might hold unscheduled updates if there is information to share.

Speaking in Ottawa this morning, Trudeau also said he is extending the Emergency Commercial Rent Assistance program by a month.

He added: “We understand that many owners have problems with cash flow right now, and we’re working on that this week.”

Speaking about the new modelling, which will be released in full later today, Trudeau said that despite the positive signs, Canadians cannot let up. 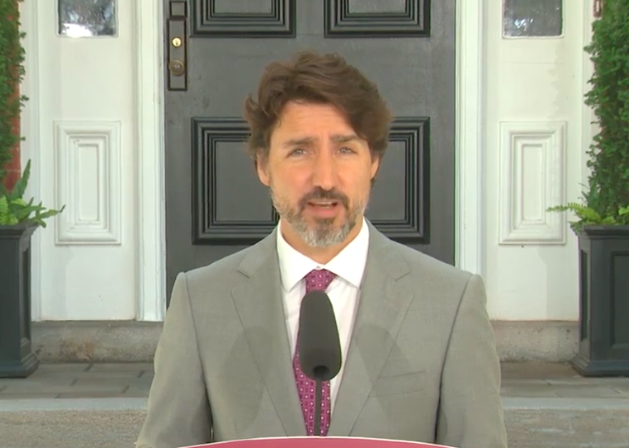 “After a very challenging spring, things are continuing to move in the right direction,” he said.

But he added that there are still “some hotspots across the country.”

Numbers of cases and hospitalizations, however, continue to decline, he said.

“That’s because Canadians are taking this seriously,” he explained, adding that they have made many sacrifices to help the country through the pandemic.

The prime minister also praised the new NAFTA deal, which comes into effect on Wednesday, and added that he is considering whether to extend the US-Canada border closure beyond July 25.