(UPDATE: 11:30 am) - A Kamloops trucker is renewing his plea to find his travelling companion who was declared lost almost a month ago.

According to Dexter Laming, thanks to generous residents in the community, the reward for the safe return of "Jake" now sits at $1,100. Jake originally went missing on Nov.10th in the Aberdeen area of Kamloops.

Multiple people have called Laming to report possible Jake sightings, but to this point, none have been successful. 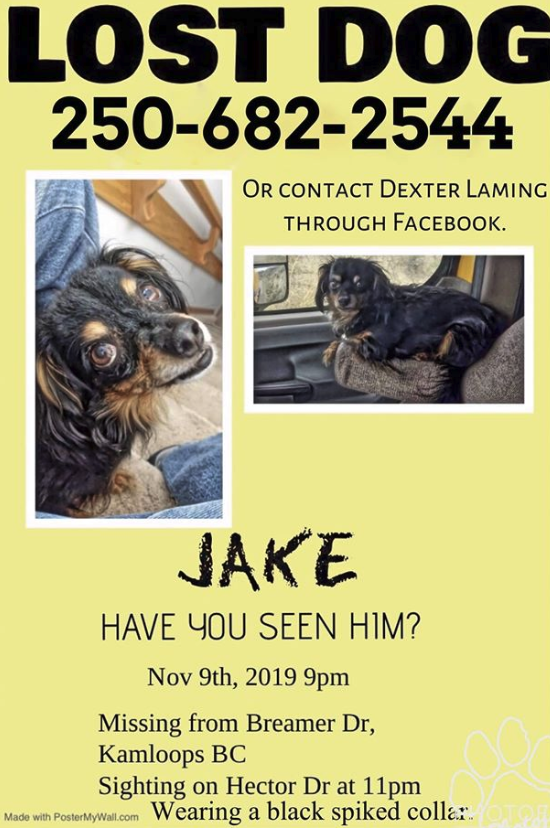 Unfortunately, Laming hasn't been immune to scammers. On Nov. 30th, he took to Facebook after a man tried to fleece him of $200 for the return of Jake.

"Now to troll that called me today, called himself Kyle, claiming his sister has had Jake since Nov 10," wrote Laming. "If there was a reward or not, I said why so long to call?"

(Original Story: Nov. 17) - A Kamloops truck driver is on the lookout for his lost "best friend."

According to Dexter Laming, "Jake" was last seen in the Aberdeen area of the River City around 11 pm on Saturday. Laming explained that Jake was "the best trucker buddy a guy could ask for," often bringing the pup with him on his routes.

"You've been the best trucker buddy a guy could ask for," wrote Laming. "My shadow when we weren't on the road and my best friend for the past 7 years! No tips, no sightings, no hits on any sites we listed him on and 6" of wet snow since last night."

Laming mentioned he hopes someone picked up his dog, rather than Jake being hurt somewhere alone.

"I hope some greedy person picked you up my friend and looks after you, the other possibilities break my heart."

Since Saturday, Laming's social media posts regarding Jake have received over 4,500 shares. Residents in Kamloops, Kelowna, Prince George, Chilliwack, and more have shared the posts in attempts to find Jake.

When Jake went missing, he was wearing a distinguishable black spiked collar. Unfortunately, the collar had no tags or ID on it at the time.

If you think you have found Jake, contact Laming through here. NowMedia has reached out to Laming for more information.