Remains of 215 children found at former residential school in Kamloops

The remains of 215 children have been found buried on the site of a former residential school in Kamloops.

Chief Rosanne Casimir of the Tk’emlups te Secwépemc First Nation said in a news release Thursday that the remains were confirmed last weekend with the help of a ground-penetrating radar specialist.

Casimir called the discovery an “unthinkable loss that was spoken about but never documented at the Kamloops Indian Residential School.”

She said it’s believed the deaths are undocumented, although a local museum archivist is working with the Royal British Columbia Museum to see if any records of the deaths can be found.

Some of the children were as young as three, she said. 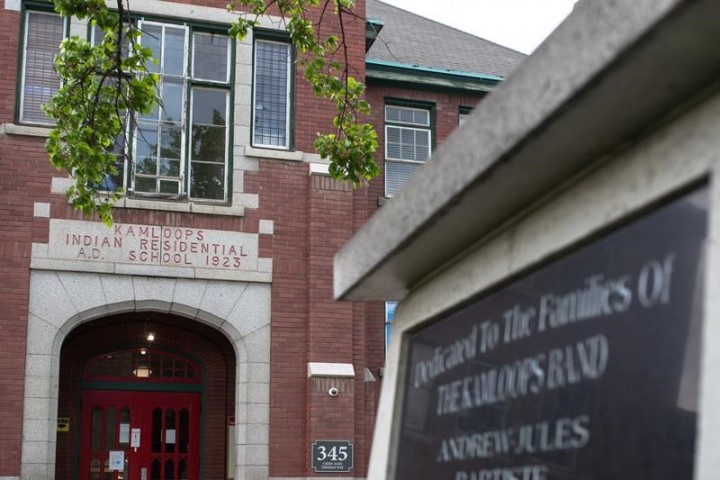 The school was once the largest in Canada’s residential school system.

“Given the size of the school, with up to 500 students registered and attending at any one time, we understand that this confirmed loss affects First Nations communities across British Columbia and beyond,” Casimir said in the release.

The chief said work to identify the site was led by the First Nation’s language and cultural department alongside ceremonial knowledge keepers, who made sure the work was done was in line with cultural protocols.

The leadership of the Tk’emlups community “acknowledges their responsibility to caretake for these lost children,” Casimir said.

Access to the latest technology allows for a true accounting of the missing children and will hopefully bring some peace and closure to those lives lost, she said in the release.

The reclamation work was paid for by a Pathway to Healing provincial government grant, she said.

Casimir said band officials are informing community members and surrounding communities that had children who attended the school.

“This is the beginning but, given the nature of this news, we felt it important to share immediately,” she said.

The First Nations Health Authority called the discovery of the children’s remains “extremely painful” and said in a website posting that it “will have a significant impact on the Tk’emlúps community and in the communities served by this residential school.”

FNHL CEO Richard Jock suggested the situation had the potential to affect First Nations people in BC and across the country.

“That this situation exists is sadly not a surprise and illustrates the damaging and lasting impacts that the residential school system continues to have on First Nations people, their families and communities,” Jock wrote in his web post.

The FNHA said immediate supports for Tk’emlúps Nation have been identified through its Interior health team, and its teams are on standby to support further needs.

The agency said some of the supports currently available include the KUU-US Crisis Line, Tsow-Tun-Le-Lum Society and the Indian Residential Schools Survivors Society.

The Kamloops school operated between 1890 and 1969. The federal government took over the operation from the Catholic Church to operate as a day school until it closed in 1978.

The Truth and Reconciliation Commission issued its final report on residential schools more than five years ago. The nearly 4,000-page account details the harsh mistreatment inflicted on Indigenous children at the institutions, where at least 3,200 children died amid abuse and neglect.

BC Premier John Horgan released the following statement about the discovery of the remains:

I am horrified and heartbroken to learn that the burial site of 215 children has been confirmed on the grounds of the former Kamloops Indian Residential School. I honour Tk'emlúps te Secwépemc as they grapple with this burden from a dark chapter of Canadian history and uphold their commitment to complete this investigation over the coming weeks – bringing to light the full truth of this loss.

Each child has been forever taken from a family and a community that loved them. This is a tragedy of unimaginable proportions. And it is a stark example of the violence the Canadian residential school system inflicted upon Indigenous peoples and how the consequences of these atrocities continue to this day.