Its official: Kelowna will be home to the newest location of the popular Mountain Equipment Co-op (MEC) store, making it a first for the Okanagan.

MEC made the announcement about the opening on its Facebook page early Wednesday morning. The new store will be located in the Orchard Plaza Shopping Centre and is set to open in spring 2016. MEC Kelowna will feature a full-service shop for bike and ski repairs as well as bicycle fitting and an equipment rentals program. 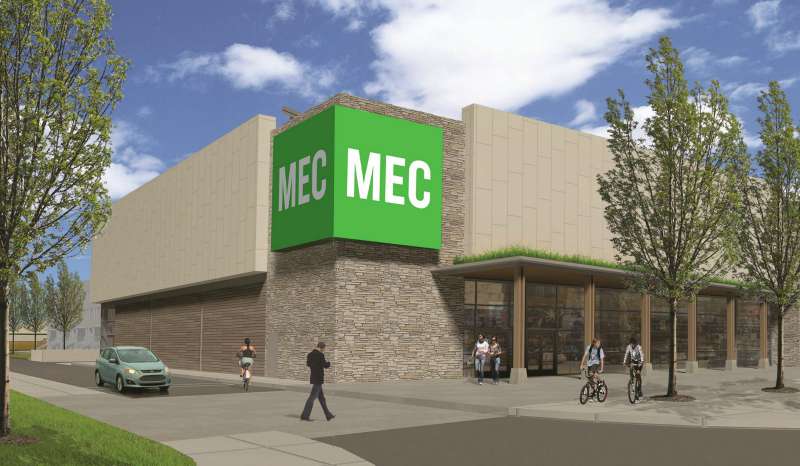 MEC is one of Canada’s largest outdoor sporting goods stores and was formed in 1971 by a group of west coast mountaineers. For its first three years, the co-op was run solely by volunteers. There were no paid employees until the business could support a store with regular hours and gear on the shelves. Since then, the co-op has grown from just six members to over 3.9 million. To become a member costs only five dollars, the same as it did in 1971.

One per cent of purchases from the co-op support Canadian environmental causes, and since 1987 MEC has invested over $29 million in Canada’s environmental and outdoor communities. MEC stores are located in Alberta, Manitoba, Nova Scotia, Ontario, Quebec, and British Columbia, and the Kelowna store will be the co-op’s 19th location and first in the Interior.

The Kelowna location will be 20,000 square feet and located in the old Future Shop location. When news of the Kelowna store was given to the Co-op’s BC employees last week, the response was swift and overwhelmingly positive. Staff were heard to say, “Finally,” and “Awesome,” while others pumped fists in the air to shouts of “Yes!”

“As many of our staff can attest, the Okanagan offers almost limitless opportunities to be active outdoors,” said MEC CEO David Labistour. “We’re thrilled at the prospect of being able to serve existing and new MEC members from a landmark commercial location in the heart of Kelowna.”

The co-op also plans to introduce its popular events programming to the region, including the MEC Race and Century Ride series. With nominal entry fees, the running races and cycling events are designed to encourage participation. MEC will also continue to invest in projects to help strengthen recreation infrastructure and organizations in the region. Over the past decade, MEC has contributed more than $550,000 to projects within the Thompson Okanagan, including $350,000 to help protect climbing access to the Skaha Bluffs near Penticton.

CFO Sandy Treagus said, “Members have been asking for a store in the Okanagan for years – and we’re stoked to soon deliver on that call. We’ll take possession of the former Future Shop space in December, and then get on with bringing MEC Kelowna to life inside and out with an extensive renovation. We’re keen to open next spring.”

MEC Kelowna will be the co-op’s sixth BC location after Vancouver, North Vancouver, Victoria, Langley and the UBC Outpost. There are presently more than 40,000 MEC members in the region, from Kamloops in the north to Osoyoos in the south.