(UPDATE: July 25 @ 6:00 pm) – During Monday’s council meeting, Kelowna City Council agreed not to support a proposal to redevelop the 600 block of Coronation Avenue.

The application was submitted in May that proposed three towers of 33, 27 and 20 storeys.

“This early opportunity is excellent because we get to hear from you and hopefully get to engage with the community,” said David Jacobson with the ownership group.

“We’re really hoping, if nothing else, you can do this as a really great first idea.”

City staff said the proposal, as submitted, “significantly deviated” from the city’s Official Community Plan (OCP) which lays out the guidelines for building heights throughout different parts of town.

This part of town is designated for buildings up to 12 storeys only and city staff argued that there were better places for a development of this size. 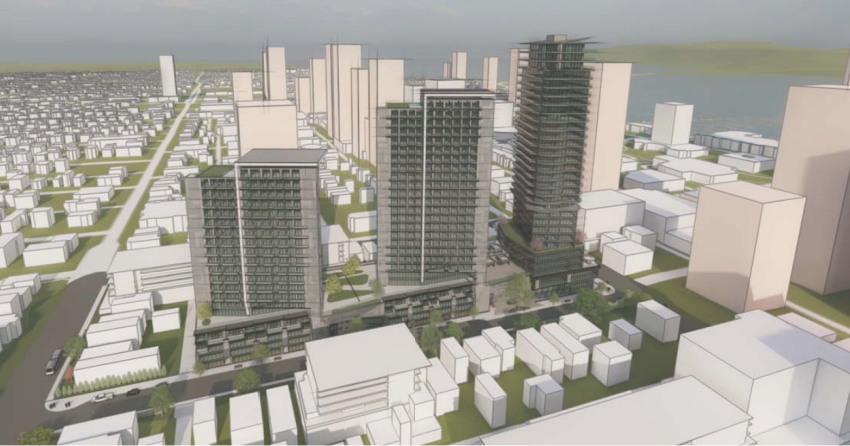 City staff say the OCP’s height policies are meant to keep the greatest amount of height and density along specific corridors.

Ultimately, city staff said the building did not integrate well to the lower density residential area, took up too much vertical space and would require a substantial parking podium.

“We really did speak quite a lot on the OCP on how to step down our downtown into the surrounding neighbourhoods,” said councillor Luke Stack, who expressed a lot of concern about the size of the podium.

“I feel that this is really kind of going the opposite direction, where we’re extending the downtown north … I think it’s too much for this site.”

City staff said that work had to be done to address the massing and visual impact which would span across 16 properties on Coronation Avenue.

“I have extreme concern with podiums that run the length of an entire city block, especially in the context of this neighbourhood,” said councillor Loyal Wooldridge.

“I feel like we’re pushing the envelope here, to park a really enormous development. For that reason I think it’s premature so, I do encourage the applicant to continue to work with staff.” 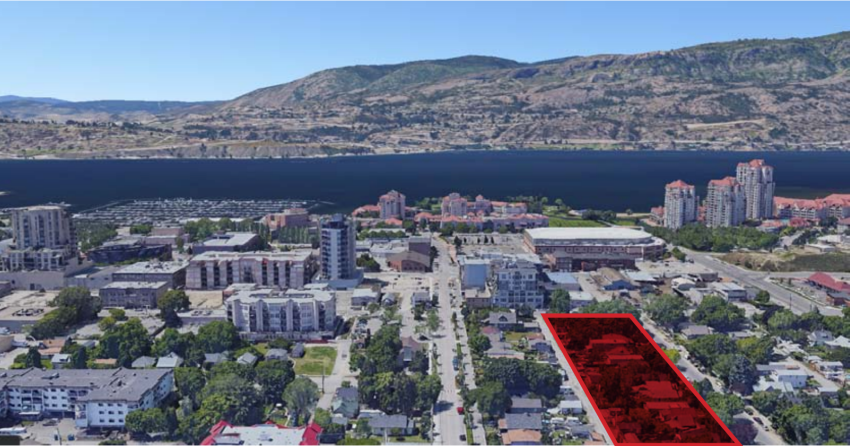 The applicant was proposing more than 700 units and an 80 room hotel, all of which would require significant amenity space to reduce projected user demand on nearby parks and other open spaces.

“We would like to request that council consider the alternate recommendation to allow the development team to collaborate with planning staff to explore the significant contribution this project could make to Kelowna,” said Brian Quiring with MQN Architecture and Interior Design.

“I think there is potential here. I think it would be an opportunity missed if we can’t find a solution that is amicable,” stated councillor Brad Sieben.

“I think (we should) encourage the applicant to work with city staff to find a solution.” 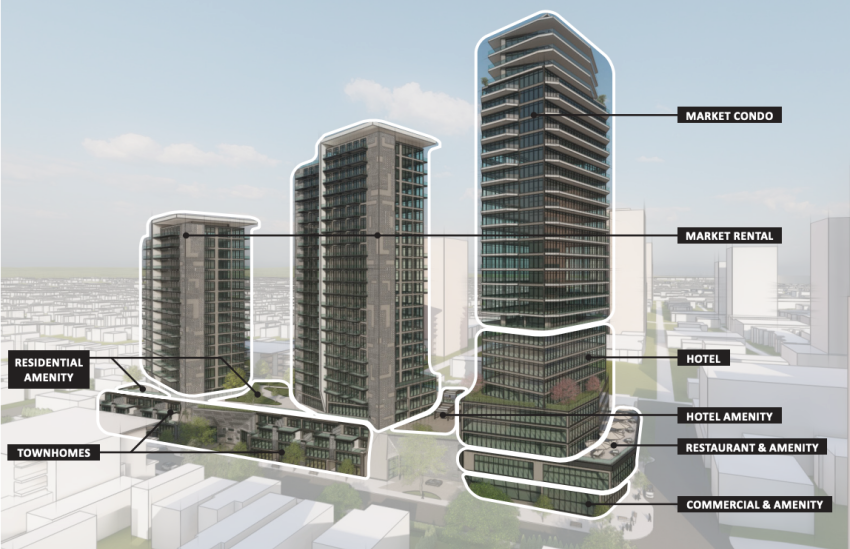 Mayor Colin Basran wondered if city staff would be willing to work with the developers to create something in the area to add to the downtown’s growing density and the city’s overall growing population.

City staff said they would definitely be willing to work with them and that the part of the early consideration process was to lay out the city’s goals and learn how far the developer would “push the envelope” on their proposal.

Mayor Basran thought the project was nice looking, architecturally, and had the potential to bring numerous housing benefits.

“It's just beyond where I think it needs to be. We have a unique opportunity here ... but unfortunately we’re just not quite there yet,” said mayor Basran.

Ultimately, council voted unanimously not to support the proposed OCP and zoning amendments for this proposal as it is currently designed.

(Original story: July 23 @ 11:25 am) – A massive high-rise development proposed for the 600 block of Coronation Avenue has not won the favour of city staff.

As a result of ongoing concerns about height and density, city staff will not be recommending city council support this project during Monday's meeting.

An application was submitted in May that proposed the redevelopment of 16 properties on Coronation Ave into three towers that would vary in heights of 33, 27 and 20 storeys.

City staff say that the proposal “significantly deviates” from Kelowna’s Official Community Plan (OCP) which sets out policies for properties located in what has been dubbed as the 12-storey category, as shown in the below map. 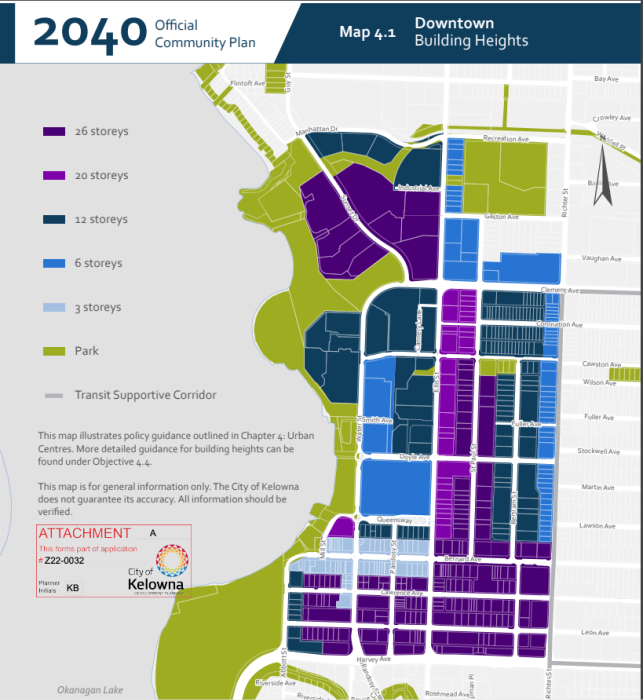 “The OCP height policy direction in the downtown was to concentrate the greatest amount of height and density along designated corridors,” explain city staff in their report which is headed to council on July 25.

“These policies are based on the premise that tall buildings are desirable in the right places, but do not belong everywhere.”

When the application was first submitted, city planning staff used an early consideration process and engaged in several pre-application discussions with the applicant who chose to move forward with their original proposal.

According to city staff’s report, the building plans, as submitted, have too large of a floor area ratio, do not integrate well to the lower density residential area, take up too much vertical space and would require a substantial parking podium.

Additionally, planning staff argue that because the applicant is proposing more than 700 units, significant amenity space would also need to be provided to reduce projected user demand on nearby parks, open spaces and amenities. 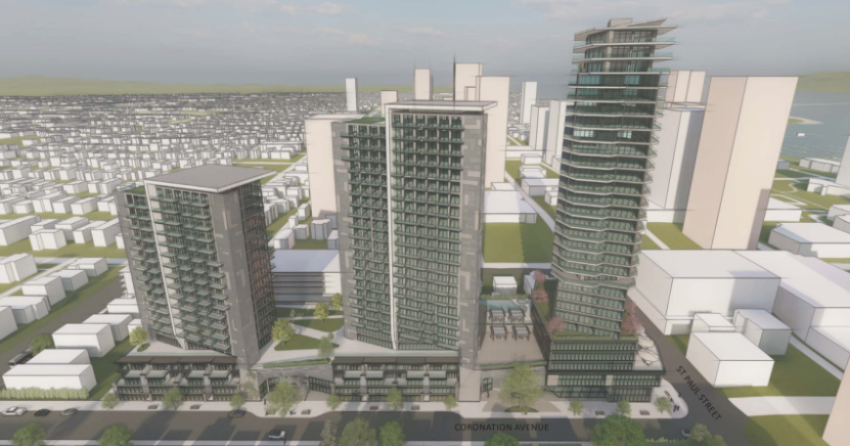 “Tall buildings are not the only answer to achieving density especially if the project undermines the character, liability, social fabric, and policy framework of the city,” reads the report.

Staff are requesting that city council direct them to process the application in an alternative matter which would include a long list of conditions.

First of all, the buildings would have to be reduced to 12 storeys or to a maximum of 15 storeys with a variance permit.

That's more than half the height of the existing proposal's tallest building of 33 storeys.

Conditions that are more commonly requested by the city are also included such as a shadow impact study, frontage improvements to Coronation Avenue and St. Paul Street, a city-led traffic impact assessment and, as mentioned, the creation of more amenity space in the development.

Kelowna City Council will review the topic during the regular meeting scheduled for Monday, July 25 at 1:30 pm.