Kelowna city council has approved an Official Community Plan amendment and rezoning request that will pave the way for a new Costco.

During a Tuesday night public hearing, held for the first time virtually, dozens of residents voiced their concern with plans to rezone a large lot situated along Leckie, Baron and Springfield roads from residential to commercial land.

First and foremost were concerns regarding increased traffic to the area, despite the fact the new location sits only 770 metres from the current Costco. 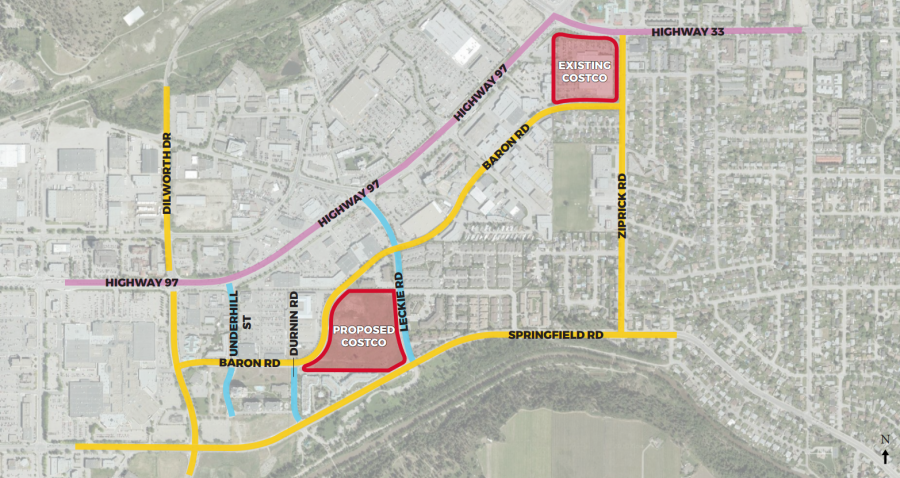 The close proximity promoted councillor Charlie Hodge to question why Costco wouldn't consider expanding with a second floor or parkade at its current location.

According to city planner Ryan Smith, a parkade was a "nonstarter" with the company's low-cost operating model and surrounding businesses refused to sell their land.

The expansion would also lead to 60 new jobs at the mega-store, which already employees about 450 people.

"During the 2018 election it was clear that residents wanted to keep Costco in the city," said councillor Luke Stack.

"Sites like this are basically impossible to find and while it may not be perfect, it's the best option."

A second option in the Airport Industrial Park was briefly proposed, but never made it to city council as the area is not designated for the large amount of commercial traffic.

"I believe the changes in the routes around the new location will do a good job addressing traffic concerns.

Those improvements include two double left turning lanes off Highway 97 and Springfield onto Leckie Road.

New traffic signals would also be installed at Baron Road and Underhill Street as well as at Parkview and Leckie Road.

If approved, Costco has committed $2.5 million towards traffic improvement in the area.

"Putting this project on the outskirts of town would have been detrimental in a different way and turning it down moves Costco to a different municipality."

In the end, council voted 7-2 to approve the rezoning application, with councilors Hodge and Loyal Wooldridge opposed.

The proposal will now move forward with an application development permit.