UPDATE: RibFest's other title sponsor speaks out regarding Monday's protest

(UPDATE: Nov. 21 @ 1:25 pm) - On Monday, activists chained themselves to Interior Savings in downtown Kelowna in a plea to have the credit union stop supporting RibFest.

While that happened, the annual event's other title sponsor, the Kelowna Sunrise Rotary, seemed to fly under the radar.

Today, three days after the protest that saw eight activists end up behind bars, the Rotary released a statement and thanked Interior Savings for maintaining their support for RibFest.

"We thank Interior Savings for their support for our RibFest event over the past four years. With their help, and the help of every visitor to the event, we raise funds that benefit our community," said Chris Murphy, RibFest chair.

(UPDATE: Nov. 18 @ 11:25 am) - The RCMP have started to make arrests in connection to this morning's protest outside Interior Savings.

The chains have been removed from the doors of the building and eight protesters have been taken into custody.

Meanwhile, Interior Savings has released a statement after meeting with the activist group to hear their concerns regarding the company's support of the annual RibFest in Kelowna.

The credit union says it remains committed to supporting local events that bring the community together and raise thousands of dollars for various local non-profits.

This year, RibFest raised thousands of dollars for JoeAnna's House, a home away from home for families that need to travel to Kelowna while their loved ones get life-saving treatment at Kelowna General Hospital.

It officially opens its doors this week.

"Ribfest offers free and accessible entertainment to everyone in the community," said the statement.

"Like most community events, it offers a selection of food options to suit people’s preferences. Interior Savings’ appreciates and respects that everyone has a right to their opinion, to share their opinion and to choose a diet that makes sense for them."

Interior Savings says it "remains committed to supporting top-notch community events that raise tens of thousands of dollars for those in our community who need a helping hand."

(UPDATE: Nov. 18 @ 9:35 am) - Protesters continue to occupy space outside of Interior Savings in downtown Kelowna.

They await communication with Interior Savings staff, who are currently figuring out their own course of action.

While the protesters have identified their sole demand as Interior Savings giving up their support of RibFest, they also suggest the credit union look into supporting an event that's more environmentally friendly.

(UPDATE: Nov. 18 @ 8:40 am) - A group of protesters that have locked themselves to the doors of Interior Savings in downtown Kelowna have one demand.

They say that's the only way that they will end their protest. 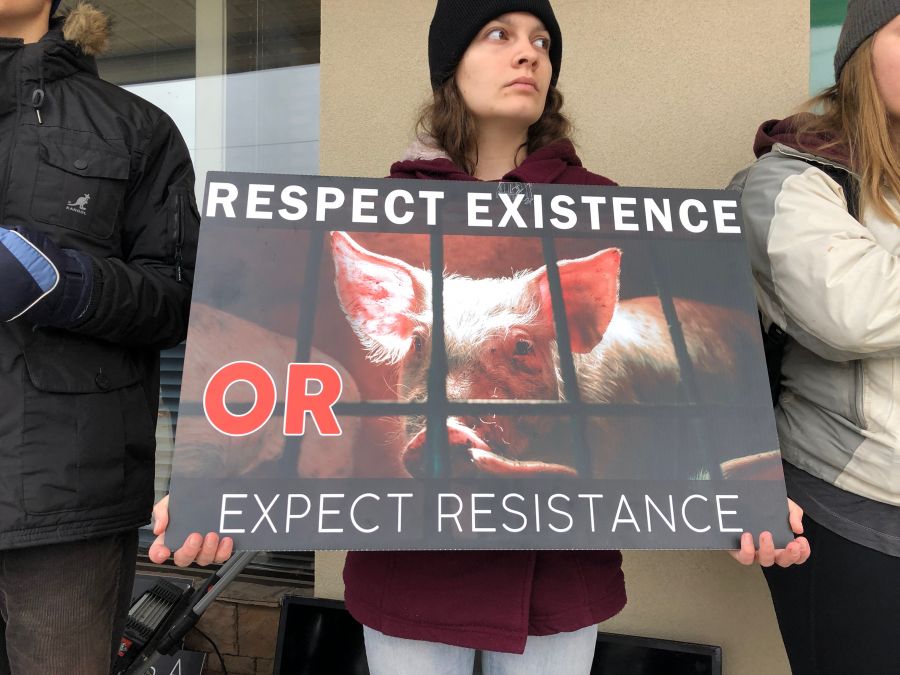 "Therefore we are calling on Interior Savings to stop supporting a festival that destroys our environment and supports farms that have been proven to conduct criminal animal cruelty”.

Police have arrived on scene and may have other ideas, however. 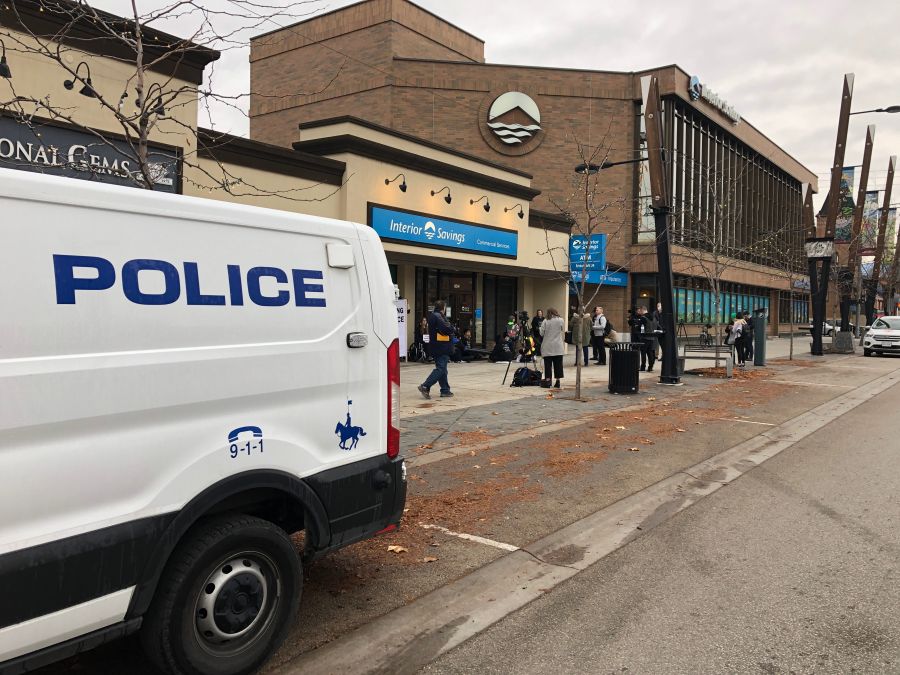 They've told KelownaNow that arrests are possible, but other avenues will be attempted first.

"We're just going to monitor this protest for the foreseeable future," said Sgt. Greg Woodcocks, referencing the right to a peaceful protest.

"Hopefully we can open up a line of communication between these guys (protesters) and the bank staff, they can have a conversation about why they're here face to face and maybe that will help resolve the situation."

Sgt. Greg Woodcocks talks about the RibFest protest outside of Interior Savings. pic.twitter.com/W6q0Qe7OvM

(Original story: Nov. 18 @ 8:05 am) - A group of animal rights and environmental activists are protesting outside of Interior Savings in downtown Kelowna. 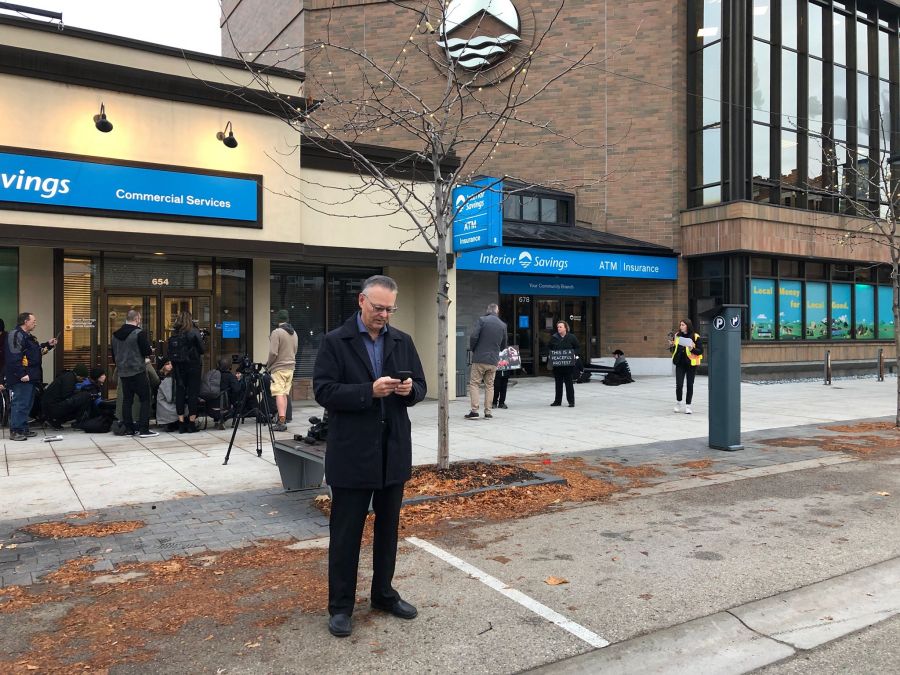 At least three protesters are locked to the doors of both.

They’ve used bike locks to secure themselves to the building and keep the doors shut, while large ABS pipes on their arms are making it difficult for anyone to free them. 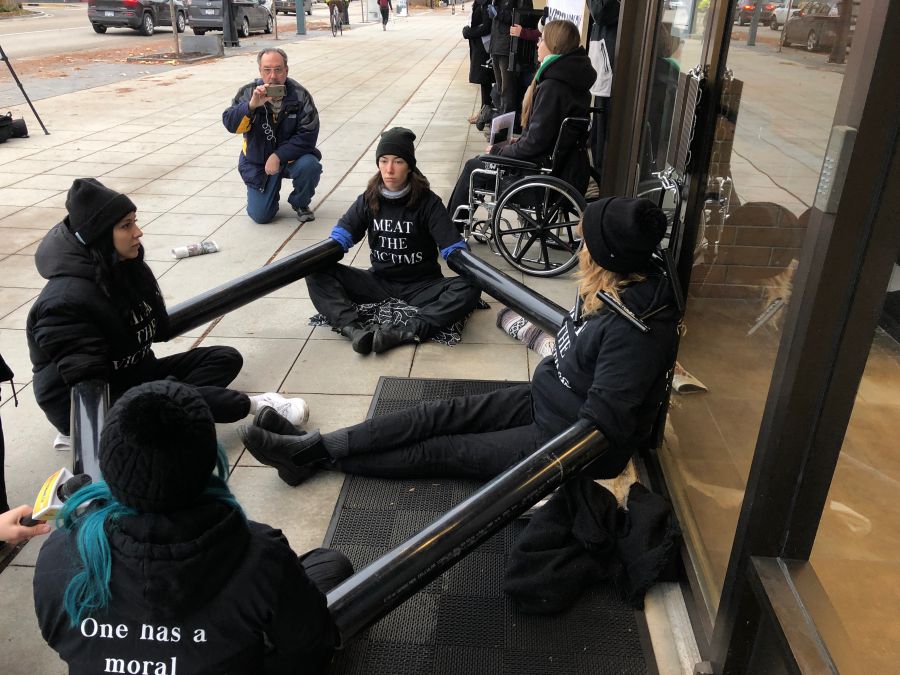 There’s no name for the group, but they’re calling themselves like minded citizens.

It’s organized by the same group that protested at a pig farm in Abbotsford in April. 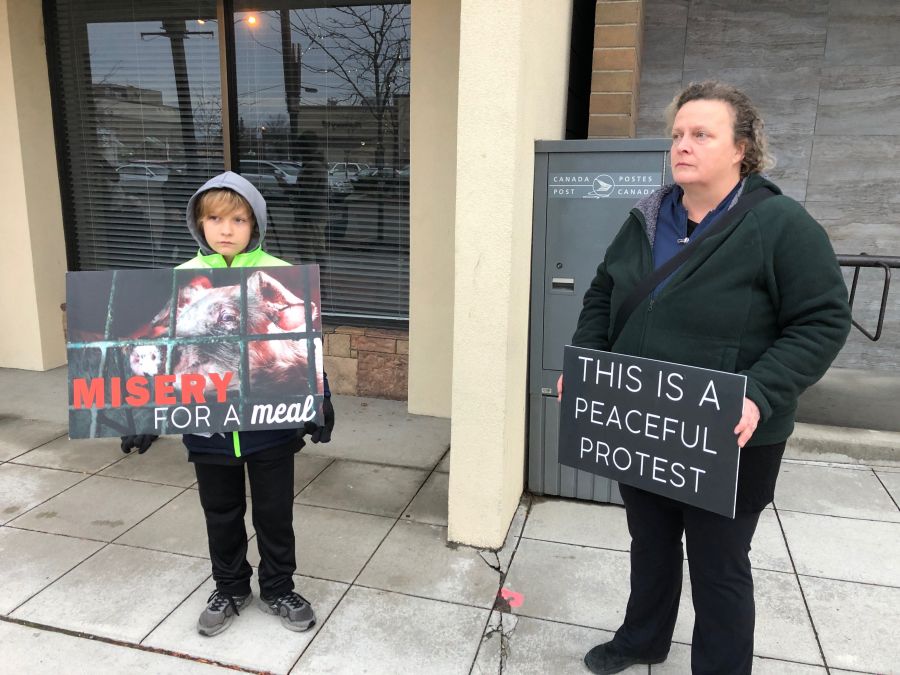 Police are expected to arrive on scene shortly.

NowMedia has a reporter on scene and will continue to update this story as more information becomes available. 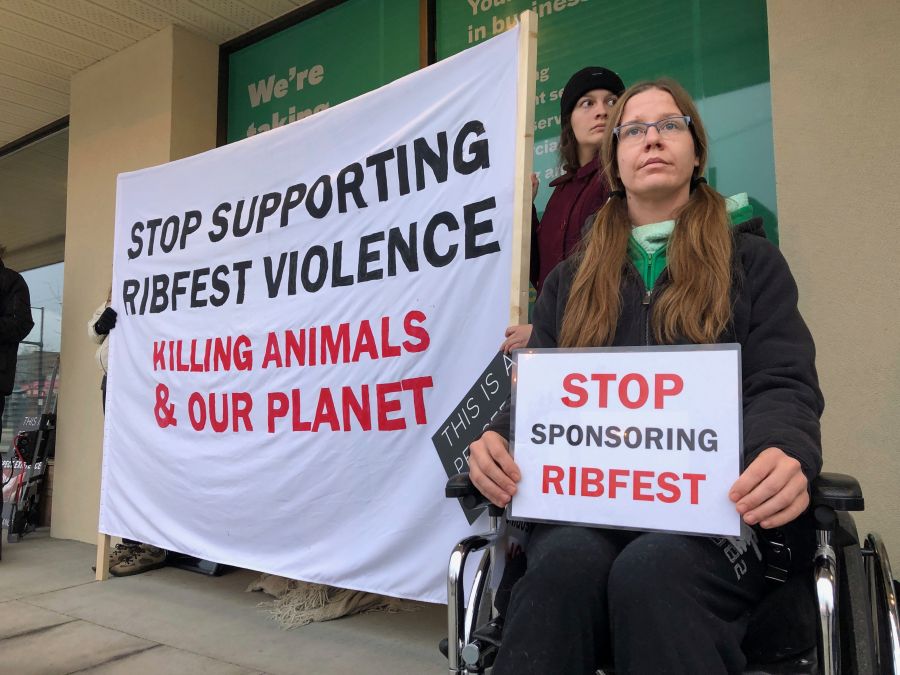