Lost is lost no more. 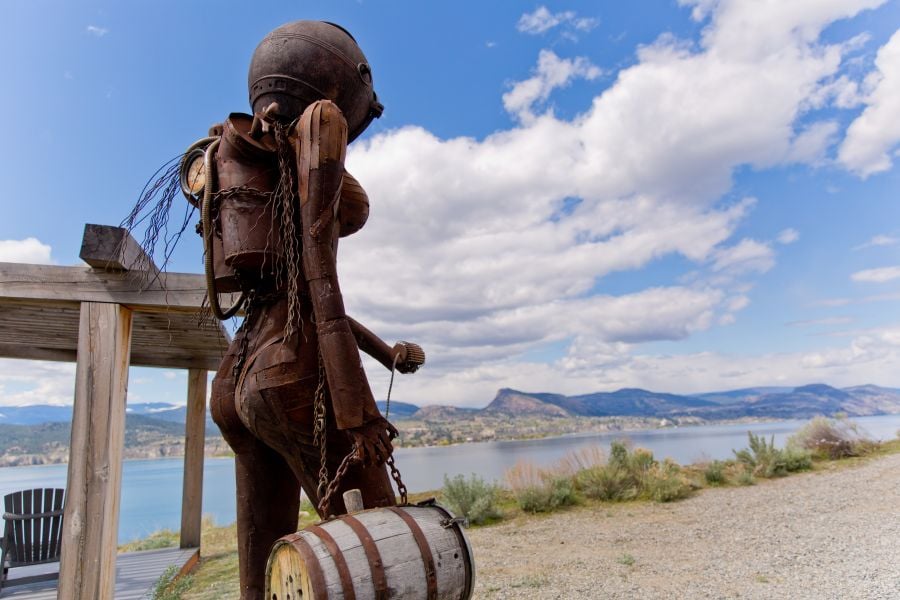 The imposing and clearly feminine post-apocalyptic ode to a failing environment that for one year graced the Front Street roundabout as part of the 2020-2021 Penticton Public Sculpture Exhibition has now found a permanent home on a cliff overlooking Okanagan Lake. 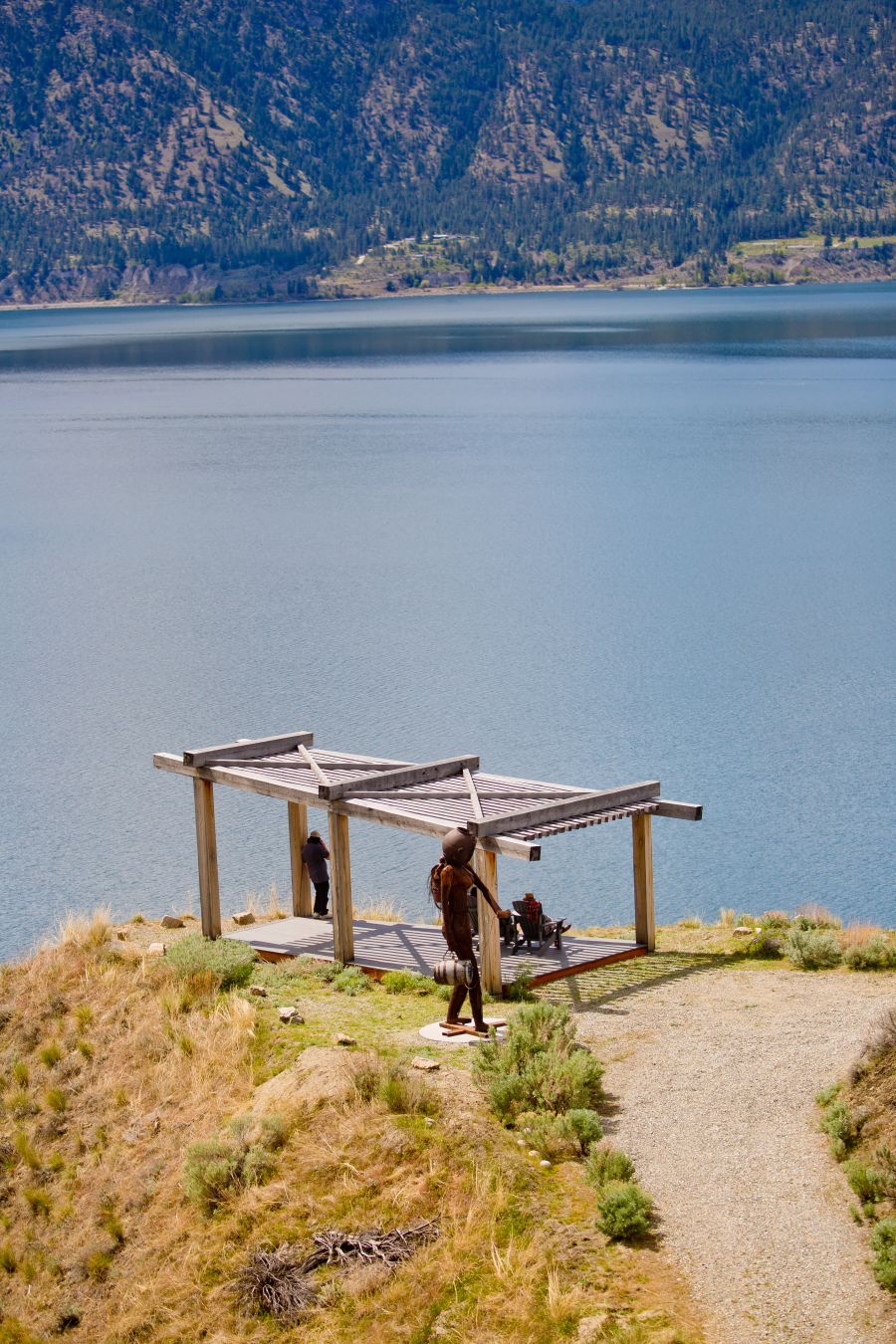 And what a setting it is. The land belongs to ex-Liquidity Wines CEO Ian MacDonald. It's part of his modernistic yet naturalistic homestead on the Naramata Bench -- a place where native vegetation blends with cutting-edge architecture, where a network of trails lead to a network of mind-blowing views, and where iconic sculptures and pieces of outdoor art dot the landscape like they were there all along.

And now, at the far edge of the property, just meters from a breathtaking precipice, Lost has joined MacDonald's amazing collection. 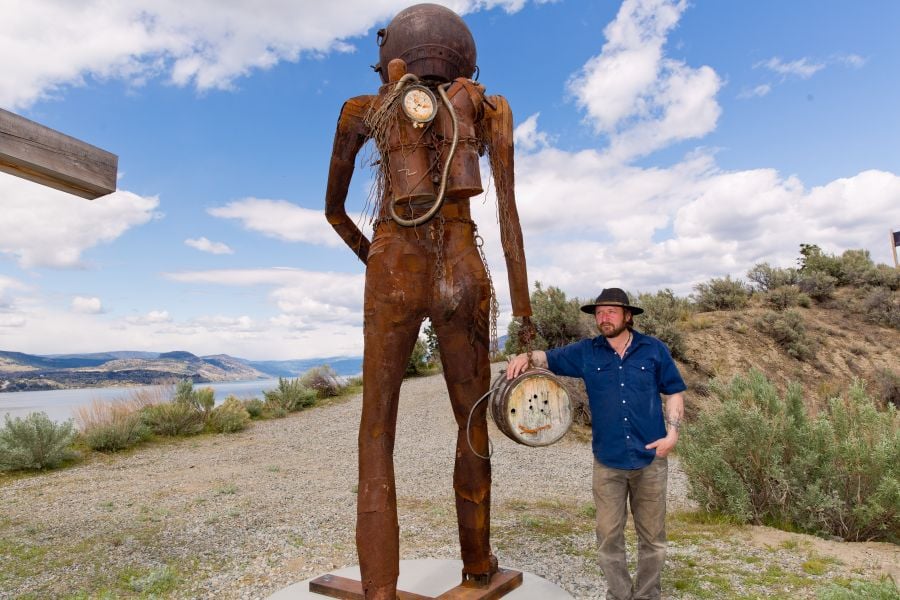 "I'm a big collector of art and have been for a very long time," said the new owner Saturday afternoon. "So when I see something that appeals to me, which isn’t often, then I usually reach out to the artist and see if it's available.

"So when I saw it was on display in Penticton, I reached out to Karl (Mattson, the Lost sculptor), and he said he'd been touring that piece, but that it didn’t have a home. So we made an arrangement. He's a great guy. I'm very happy." 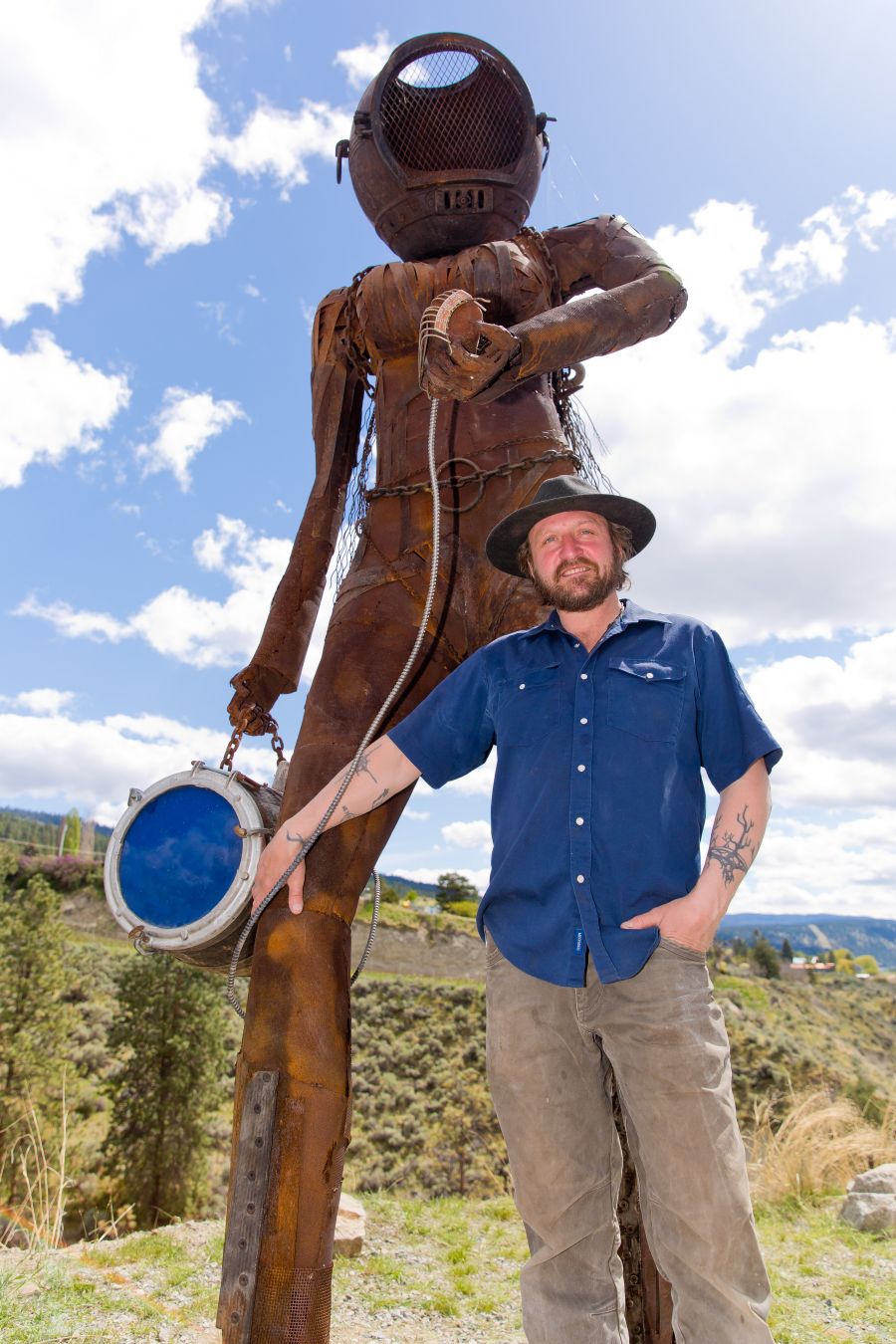 Lost was transported to its new home Friday, and Mattson was there for the entire thing. He says the last bit, where the 800-lb., three-meter-tall goliath was transported down a steep gravel path, was quite the scene.

"We had a picker truck, and Ian had rented some sort of track -- a little dump truck on tracks. It was amazing.

And then we had a local landscaper with a miniature hoe. And the pad was already poured when we got here. It was perfect." 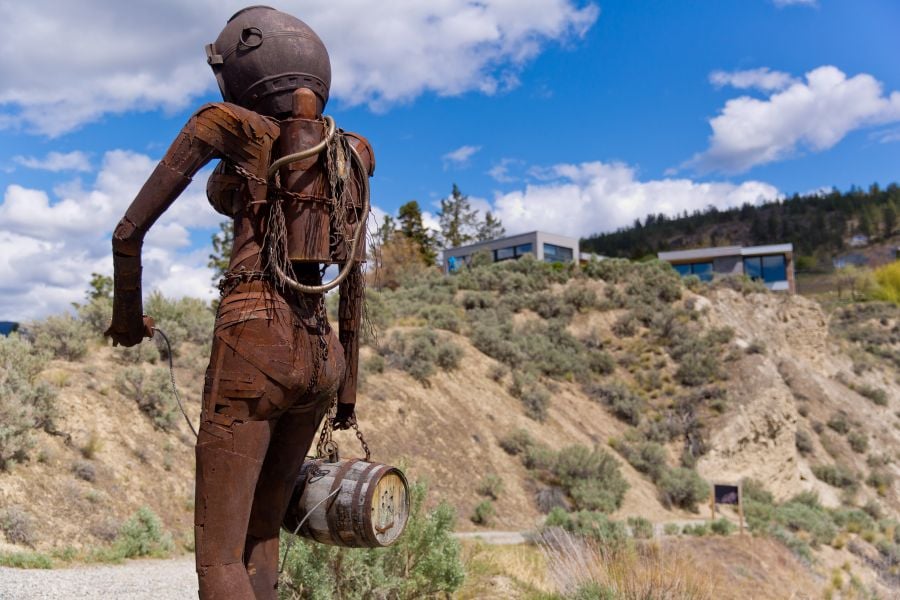 Built entirely from salvaged materials Mattson sourced from local farms, scrap yards and oil and gas refuse sites near his home in Rolla, BC (22 kilometers north of Dawson Creek), Lost was inspired by a series of works he created called Life Pods -- essentially self-contained survival chambers.

"Lost was more of a personal piece dealing with existential feelings I was having at the time," he said. "My other works were breathing tanks and concerned my thoughts of the future, environmental concepts, and communication. Wrapping my own thoughts around the idea of mortality and the environment we exist in. 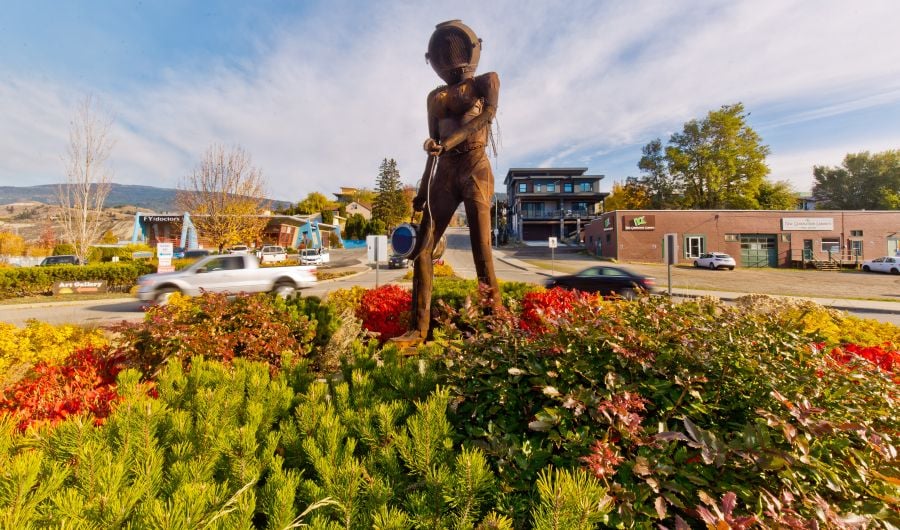 According to Mattson, who spends much of non-artistic time farming hay on his 160-acre northern BC parcel, the Penticton experience has been "great."

"I got great feedback from folks in general, and the Penticton Art Gallery," he said. "Paul Crawford (curator) is one of my mentors."

"Some students did something (stringing posters across the sculpture) for Earth Day, and they'd contacted me in advance. Then there was the Santa hat (that appeared just prior to Christmas). 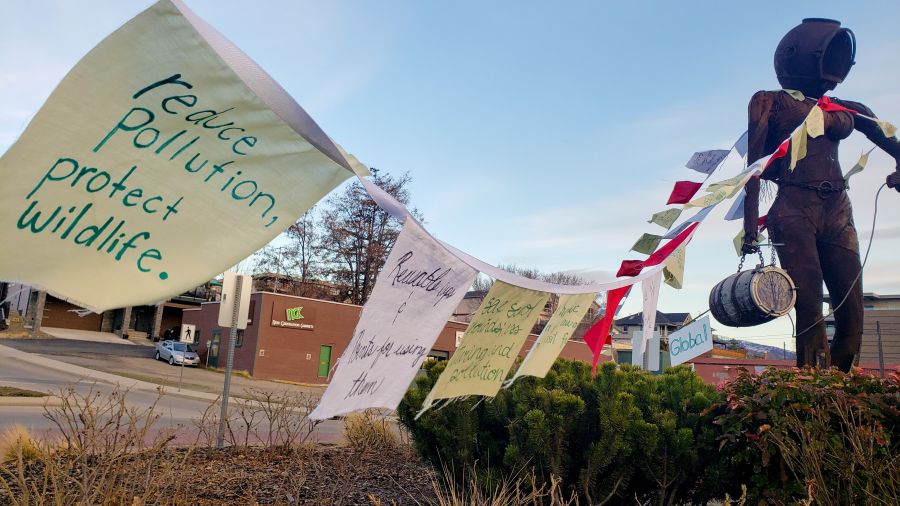 "But there was never any damage. That was pretty cool." 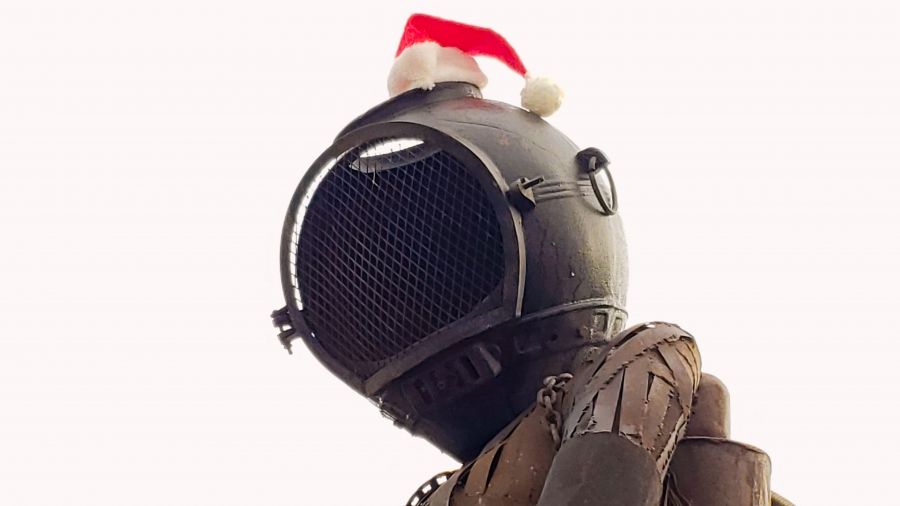 Notoriety from the Penticton display also garnered Mattson a privately commissioned piece -- another in the Lost series -- that he's just drawing up now. Once complete, it'll reside in Calgary.

He's also had recent shows at UBC and SFU, and just finished a piece for the University of Northern British Columbia in Prince George. 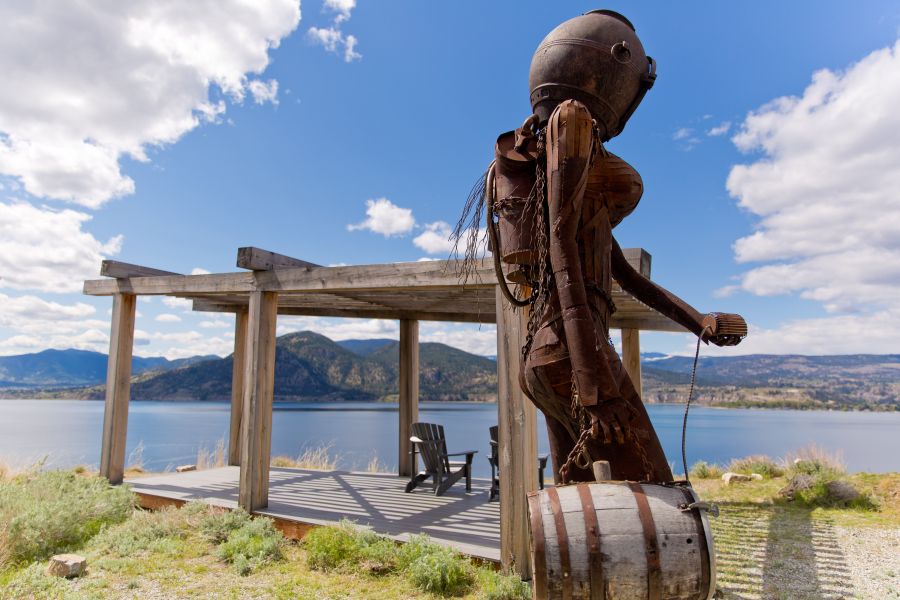 Sadly, the sculpture's new home on the tinder-dry Naramata Bench means there's little chance of Lost's head becoming the stove it was intended to be.

"Yeah, fires can be lit in the head," said Mattson with a laugh. "I had a conveyor belt originally where people can run it themselves. They can feed fuel, which is usually thoughts they've put on paper, into the fire. 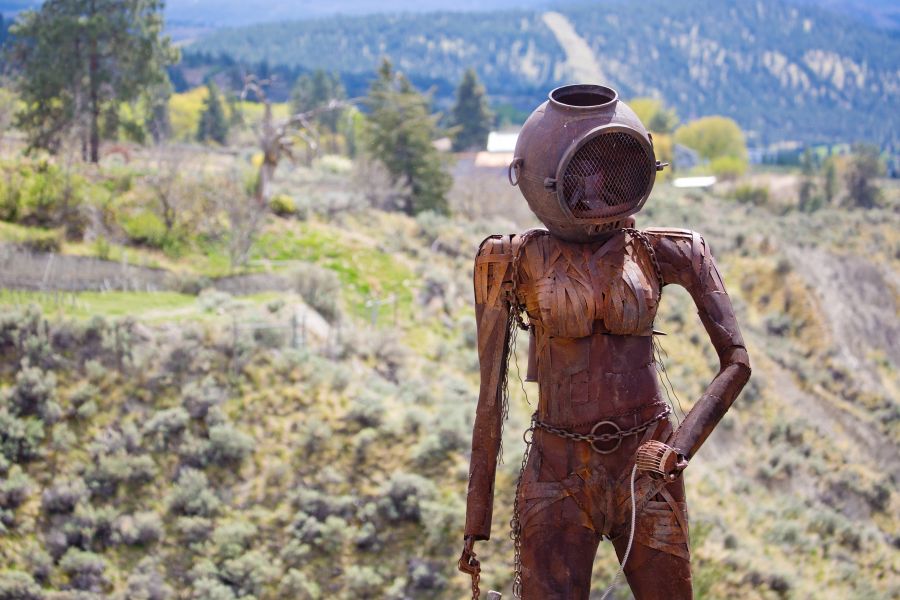 "I might discuss with Ian maybe in the winter sometime to have a photo opp with her head on fire. He's been great to deal with."

MacDonald, well know for all the high-end art he brought to Liquidity when he ran the place, maintains he fell in love with Lost as soon as he saw it. 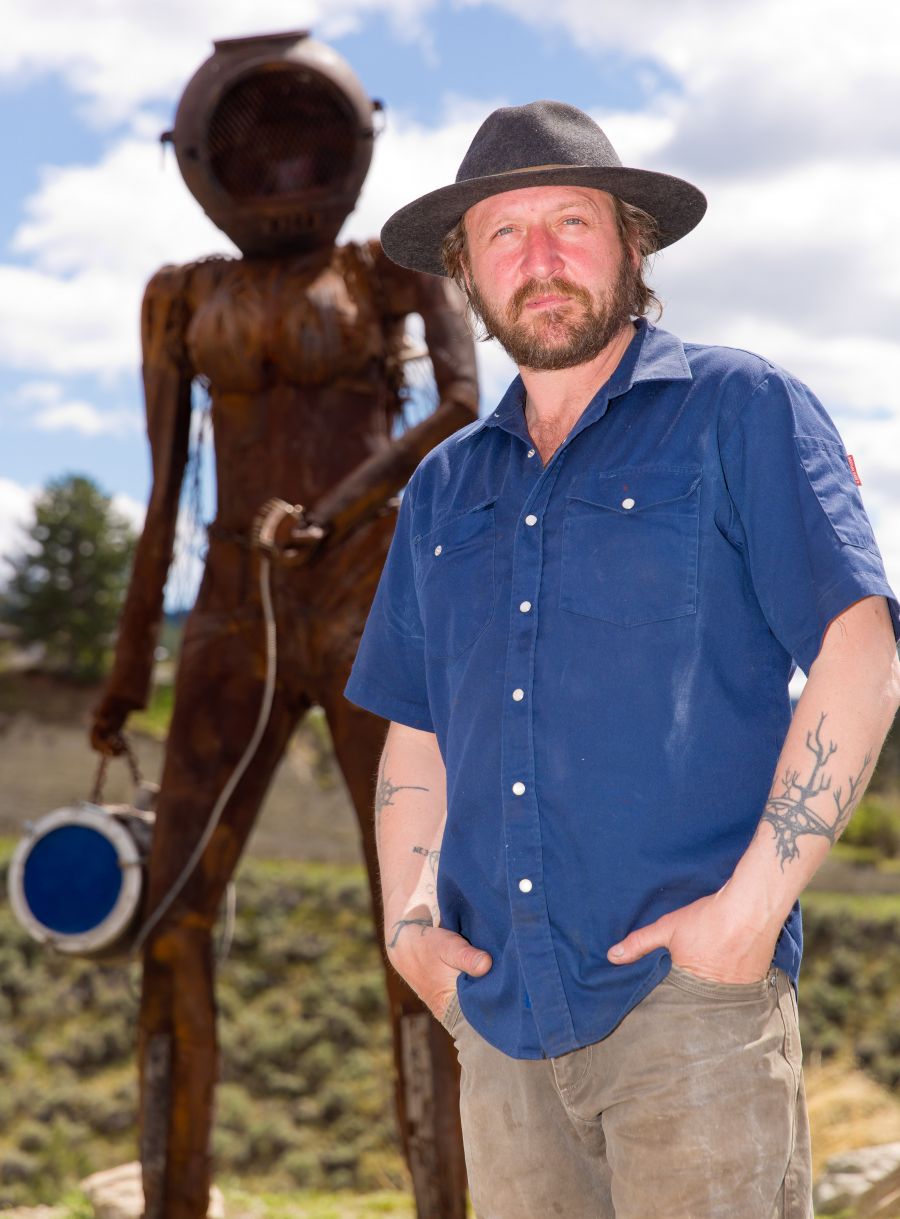 "I like the rawness of the piece," he said. "The fact that it's all this salvaged material that's been used to create something special. I like the scale of it, and the feminine aspect. And it's also a bit whimsical. It's fun to have that around you."

Today, Karl Mattson is making the long drive back to Rolla. He can be reached at karlbmattson@yahoo.ca.