As PentictonNow documented here last fall, the main drag through Okanagan Falls is a mess. Closed businesses, unkempt properties, an empty shell where an IGA once stood, a still-shuttered hotel, a gas station that doesn’t pump gas -- we could go on. 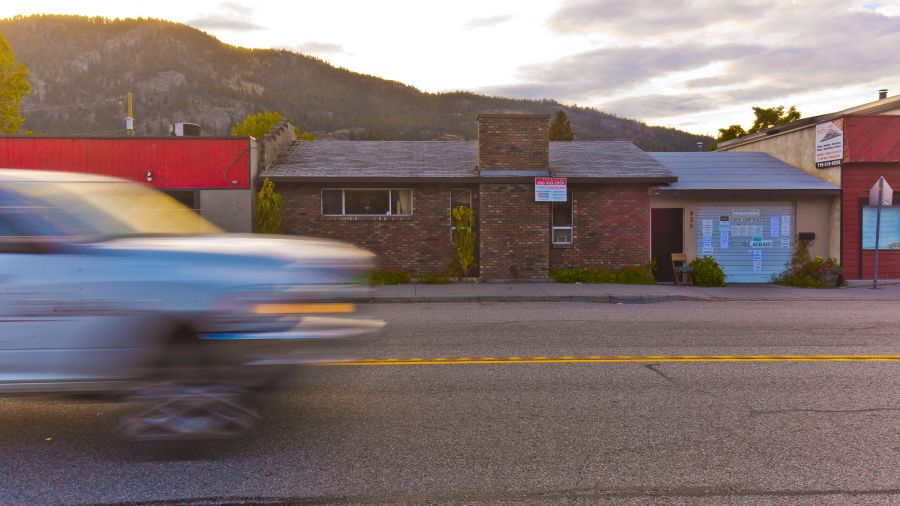 There are, however, signs of change. The provincial government just handed the community 80 grand for an incorporation study. The long-vacant Weyerhaeuser site is now destined to become a light industrial park. The old post office will soon be a warehouse grocery operation.

And this past Saturday, the soft opening of a brand new multi-faceted business gave the downtown strip a desperately needed shot of adrenaline. 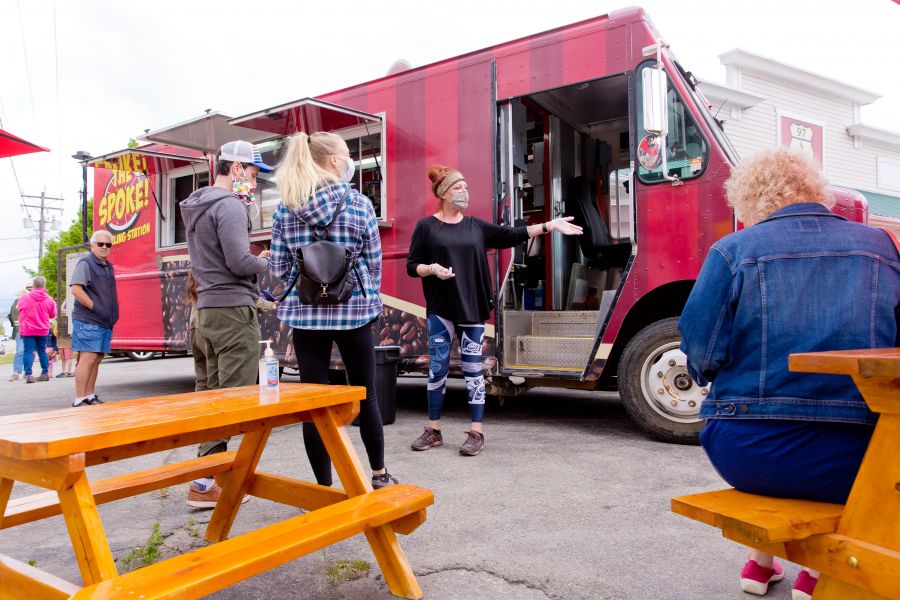 It's called "The 97 and Main Crossroads," and it's the product of two community newcomers, Kate McLean and partner Kelly Kask, who arrived in town last year and set their sights on a pretty single-storey building emblematic of the downtown plight.

Situated at OK Falls' key intersection of Main Street and 9th Avenue, at the only right-angle Hwy 97 corner south of Penticton, it was nevertheless mostly deserted and living way below its potential.

But McLean and Kask got to work, and Saturday was the test launch of their vision. 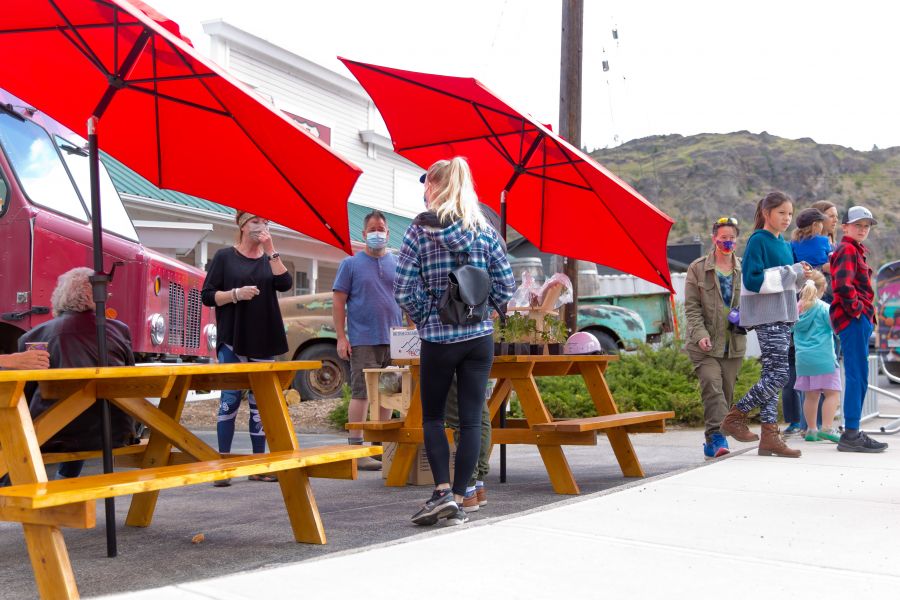 And the place was buzzing unlike anything has buzzed in downtown OK Falls for quite some time.

The 97 & Main Crossroads is like one of those Russian "babushka" dolls where you open up the first only to find a bunch more dolls inside. And because of its location -- it’s ideally situated for vehicles and even more so for the near-constant crush of cyclists zipping though the south Okanagan -- all those different dolls somehow work well together. 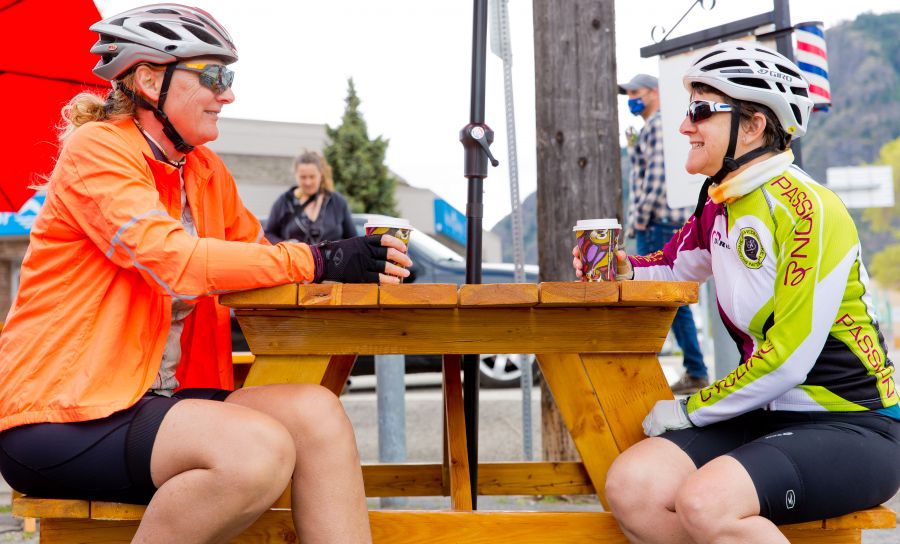 For starters, there's a food truck. It's called "The Spoke," and it serves stuff like sandwiches, cinnamon buns, donuts, and espresso. And Saturday, as its name implies, it was a magnet for passing cyclists. 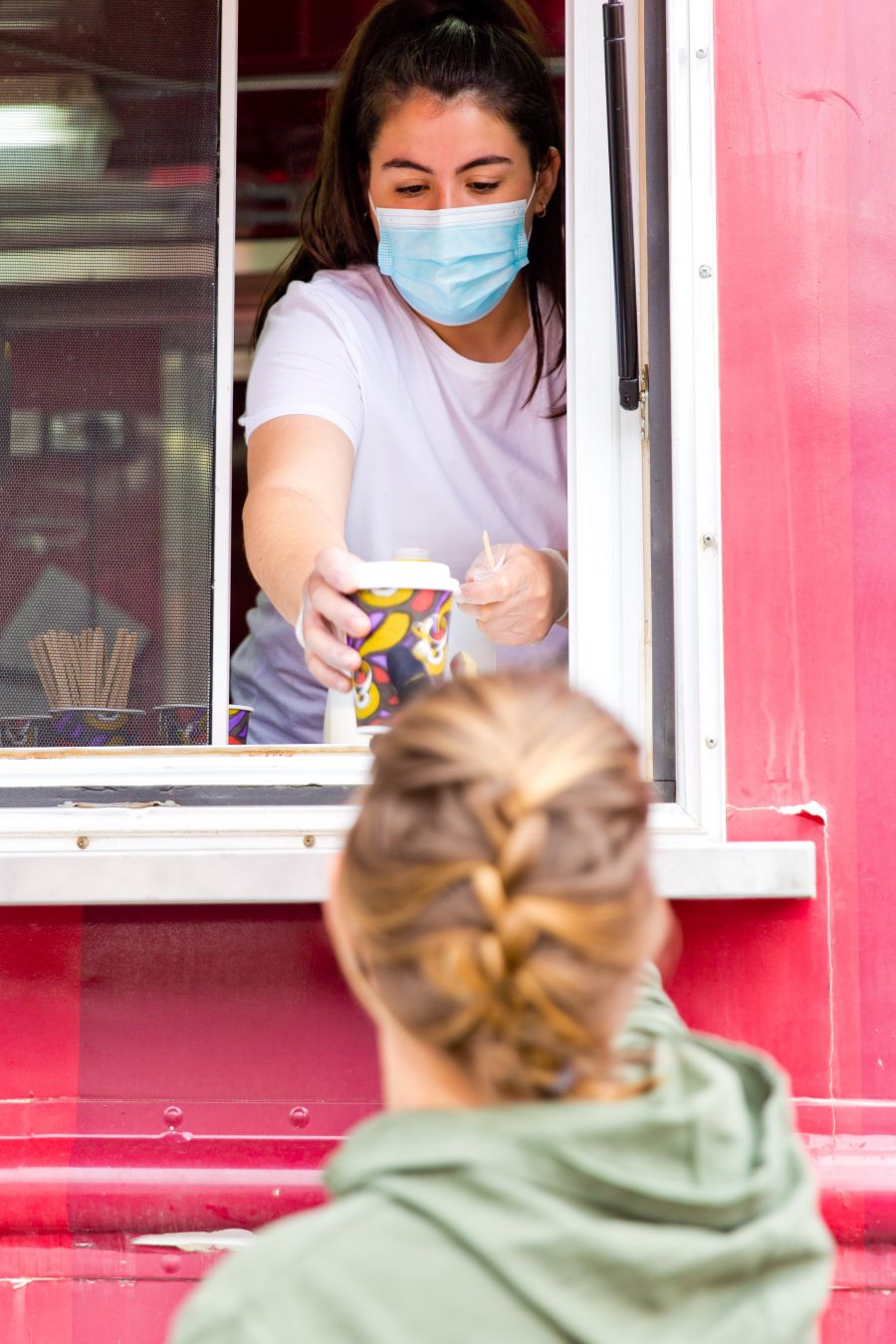 As was the Crossroads takeout window, where they serve up a tasty treat called an Okanagan Ice Pop that looks like a traditional popsicle but is made right here in the Okanagan from far healthier stuff and tastes amazing. 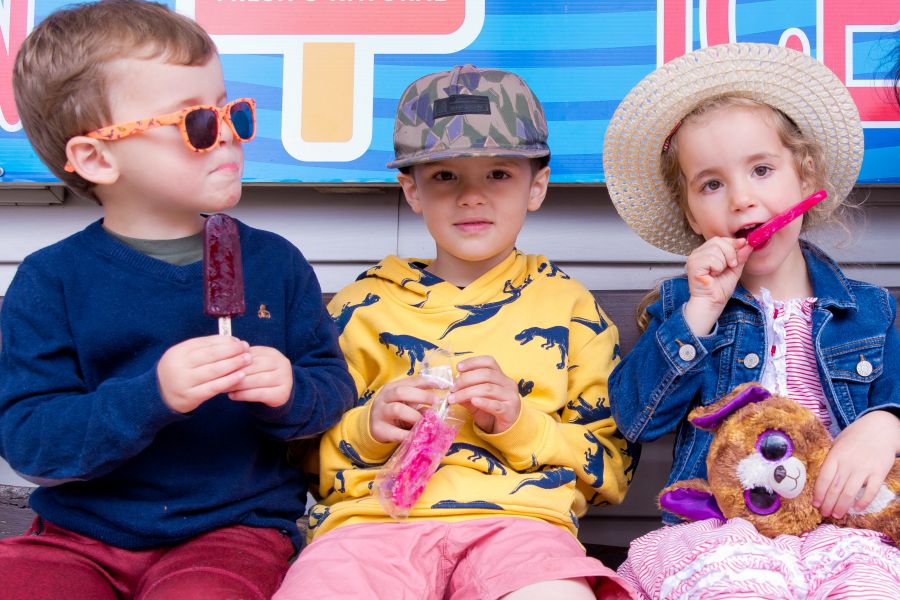 For those who appreciate their fruits and veggies in a slightly less frozen state, there was fresh organic produce from south Okanagan's "Local Motive."

"Local Motive delivers CSA (Community Supported Agriculture) boxes throughout the Okanagan," said Crossroads spokesperson Kask, "and now their OK Falls stop is right here. You pick the price and the produce, and a box is delivered to you every week. 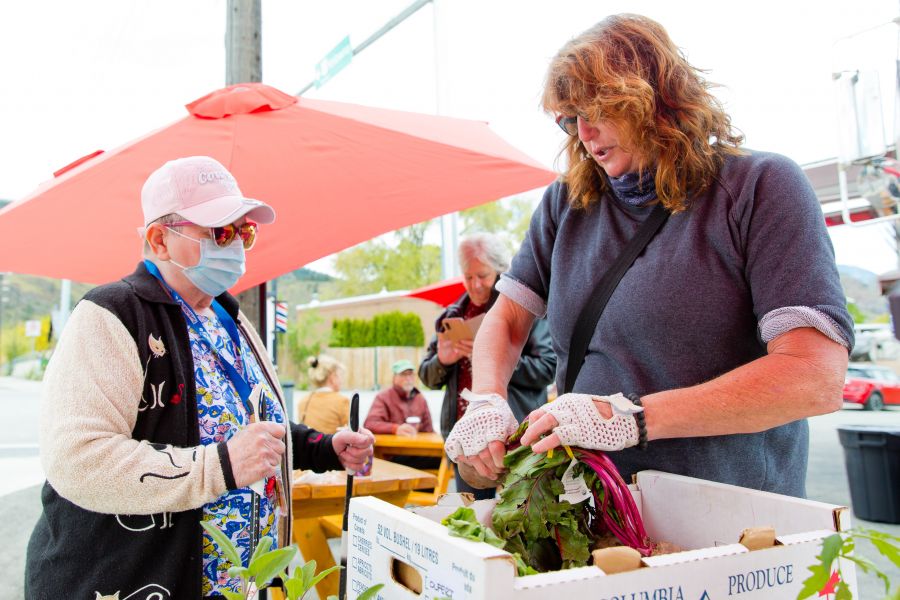 "They were going door to door with their truck, but now they're going to drop ship them here and we'll deliver them on e-bikes. Or you can buy a box here and take it away."

Beyond all of the above, the shop was offering freebie e-bike rides. It was a no-charge taste of what'll happen in the months ahead when Crossroads goes full force into e-bike sales and e-bike and inflatable paddleboard rentals. Indeed, they'll even deliver and pick up paddleboards from the beach, just a couple blocks away. 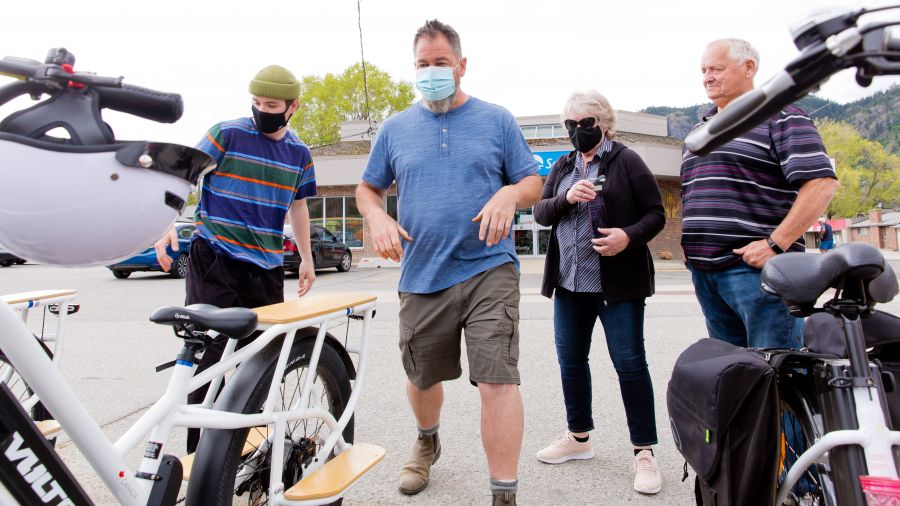 "Inside, we'll have a 'tool library' for cyclists," explained Kask. "It's for anyone who needs a tube, needs a pump, needs a derailleur repair."

"And in the back we'll have a tent and more picnic tables. And we'll have a stage. We bought the stage they've used at Peach Fest for the past 40 years and we'll set it up for buskers and people who are passing through and want to play for tips." 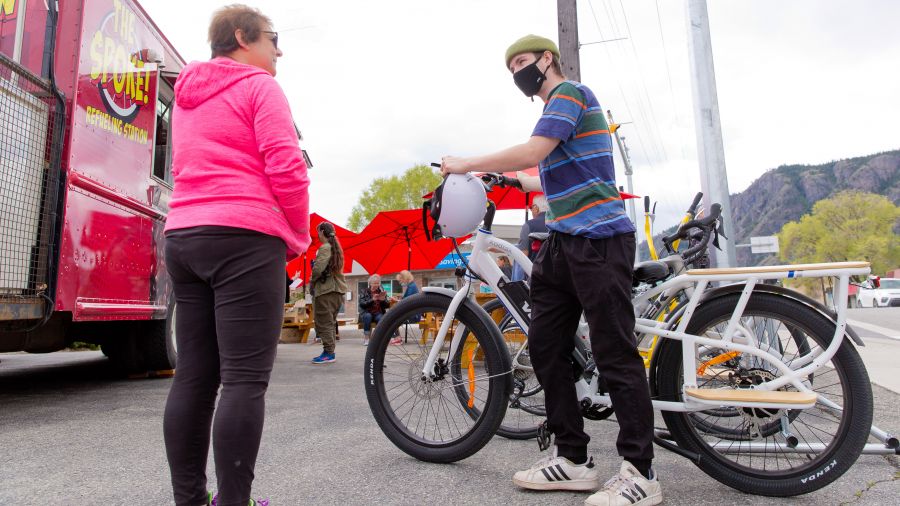 When you put it all together, The 97 and Main Crossroads is clearly an ambitious project. But its potential success and the excitement it may generate would mean a ton to a downtown so fervently hoping for a kick start. 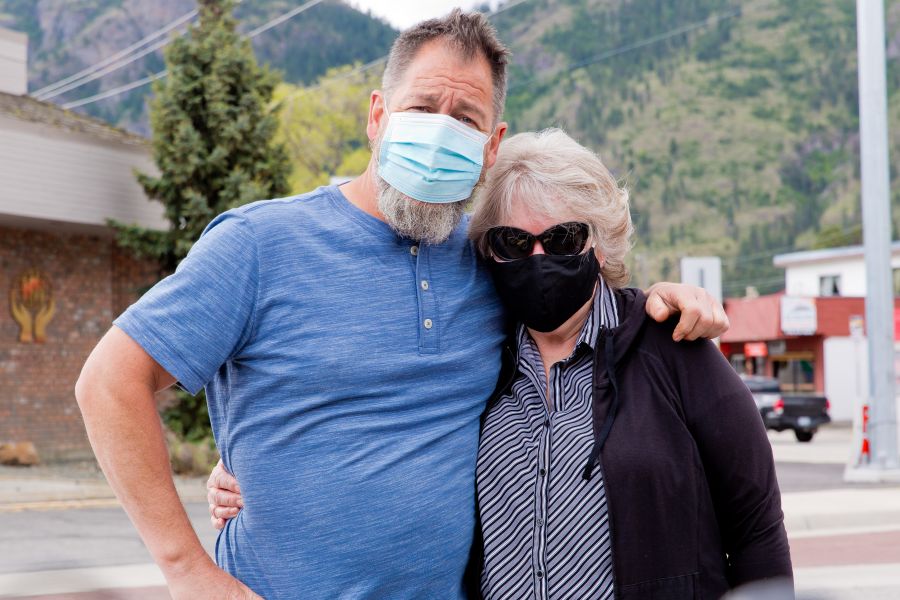 Linda Horn, who runs 3 Winds Hair Design, the only surviving business when McLean bought the building, is a big believer in her new landlord.

"I bless the day Kelly and Kate came here," she said. "They've jumped in with both feet to help revitalize this little town. Everybody agrees things need to be done, and they're actually doing something."

Barbara and Ray, OK Falls residents for 25 years, stopped by for a look and came away enthused. 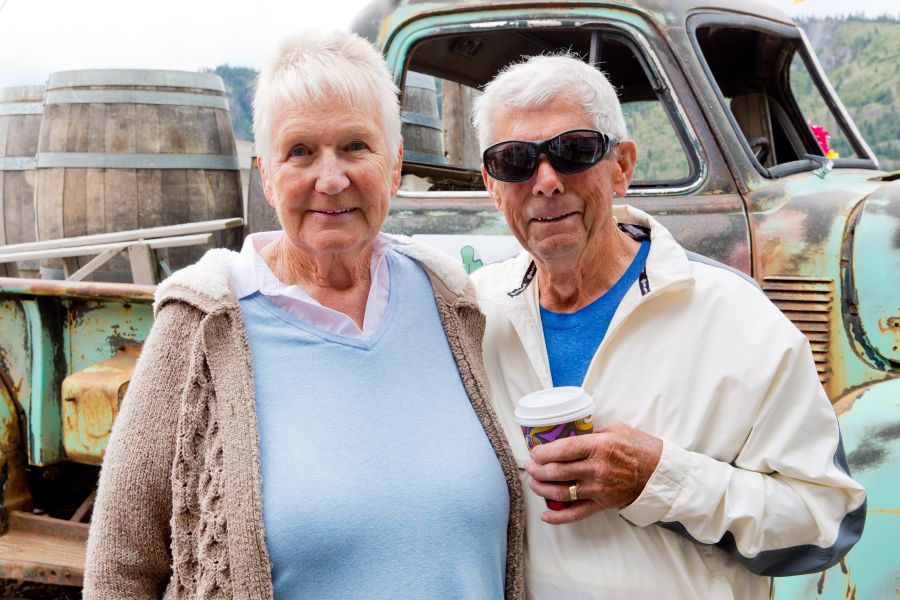 "We're so happy Kelly came here and opened this up," said Barbara. "We need this. We need the food truck. We need action here, especially on this busy corner. I'm very happy."

Thirteen-year-old Grace, who just began her first-ever job working the Crossroads takeout window, raved about the friendliness of both the customers and the staff. And she laid out some very mature thoughts on other subjects too. 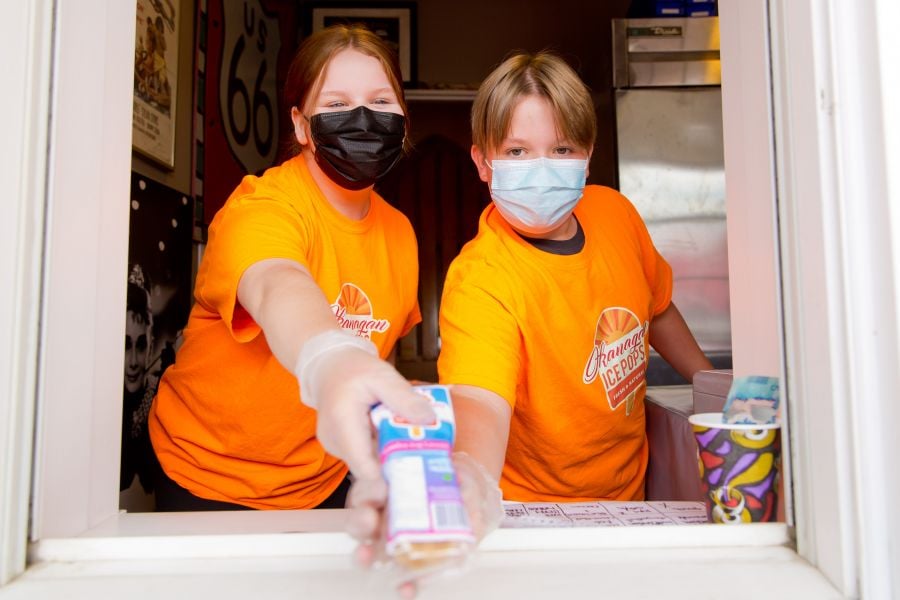 "I think they should have built a small mall or something here that would have given younger people something to do instead of having more cannabis stores and liquor stores," she said. "I think that's ruining the city."

A group of five Penticton cyclists swung by, grabbing coffees and donuts and enthusiastically saying they'll be back. Later, a trio of substantially more hardcore riders echoed those thoughts. 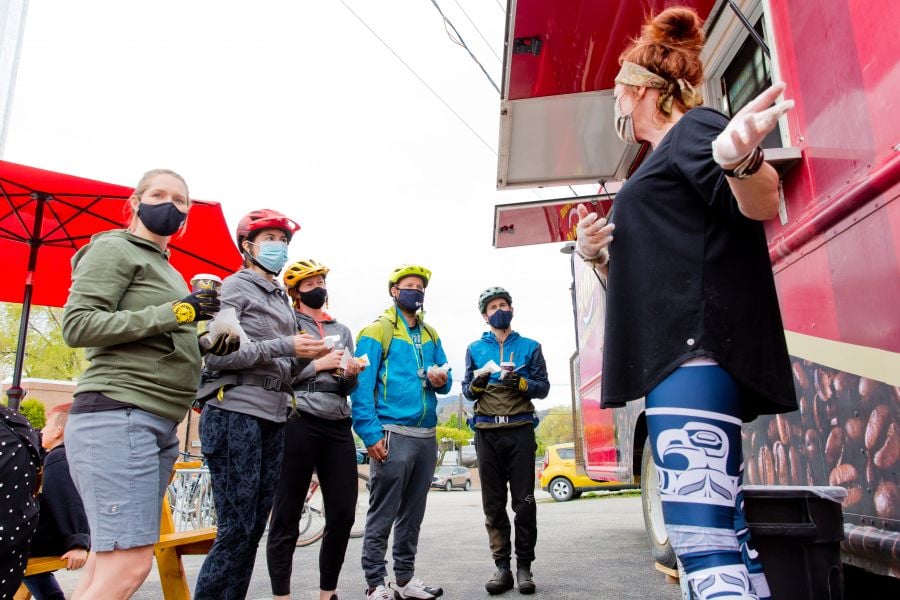 "We were out for a ride this morning from Penticton through the hills to Oliver," said Penticton's Ian Nelson. "We stopped at the 7-11 in Oliver and saw on a Facebook feed that there's a food truck for cyclists in OK Falls. 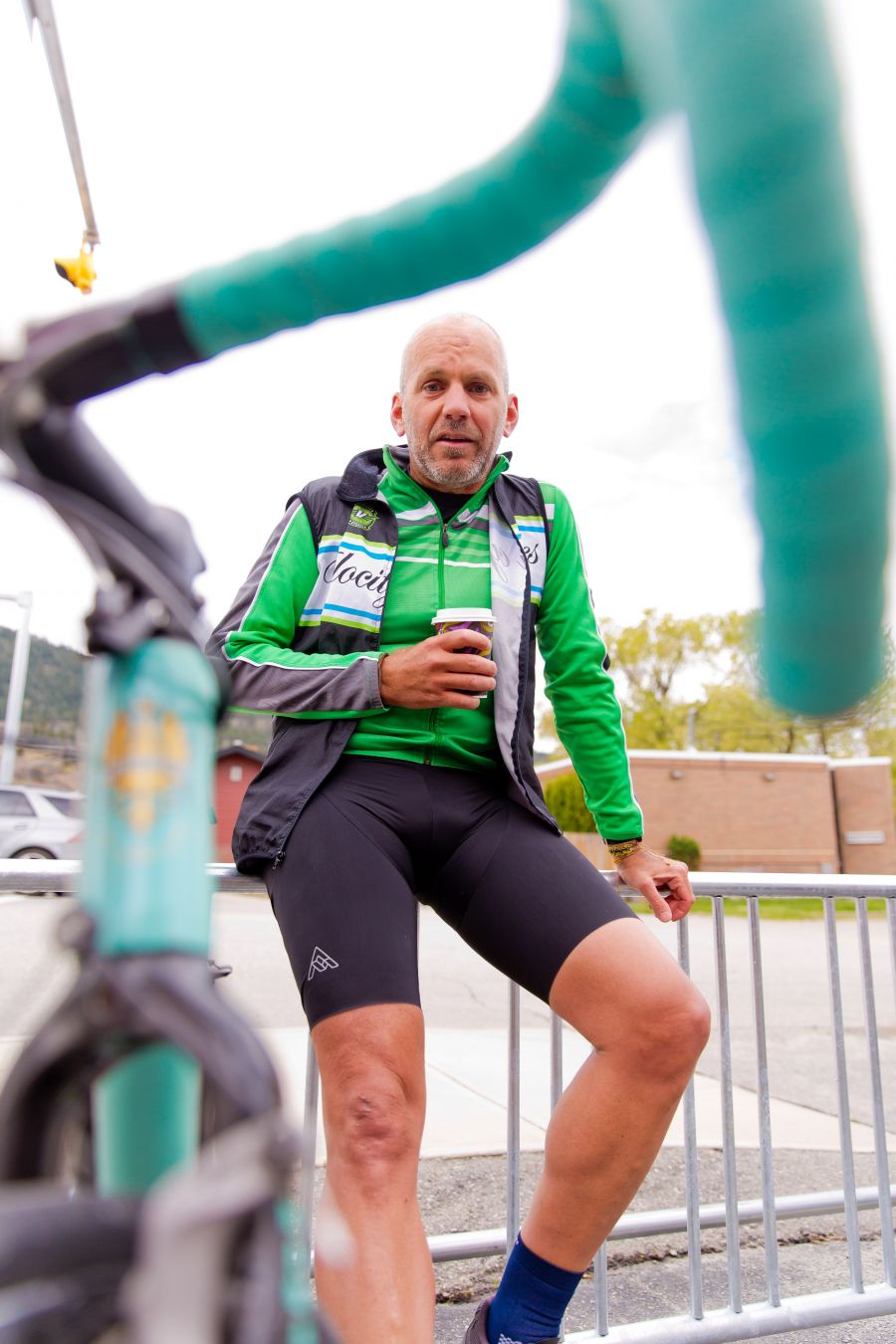 "I think it's awesome. People ride down here from Penticton all the time."

With the soft opening out of the way, The 97 and Main Crossroads now gears up for the real deal. It'll open again this Saturday and Sunday, close for a few days, then begin a seven-days-per-week schedule on the May long weekend that'll last at least through September. 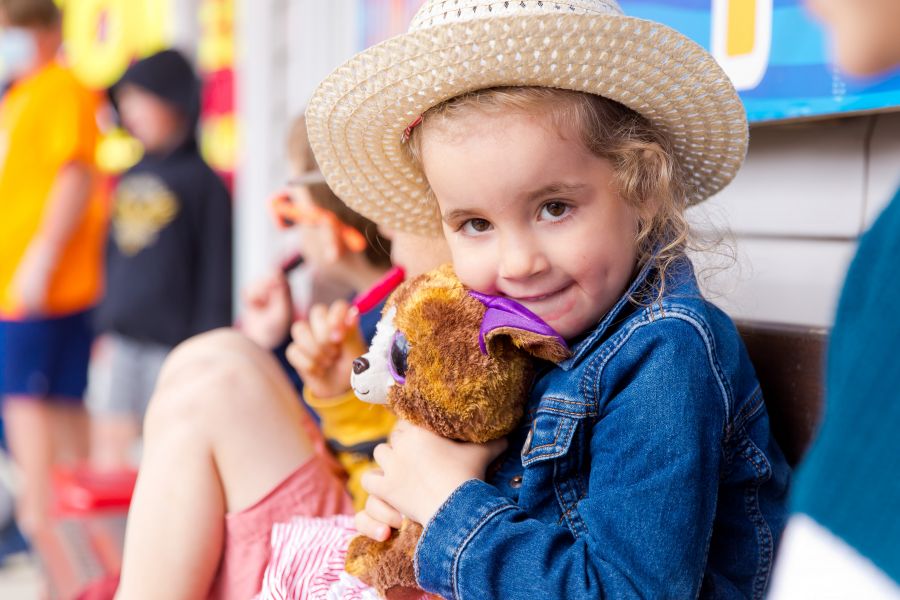 Prospective daily hours are 8 am to 6 pm. For more info, check out their Facebook page. 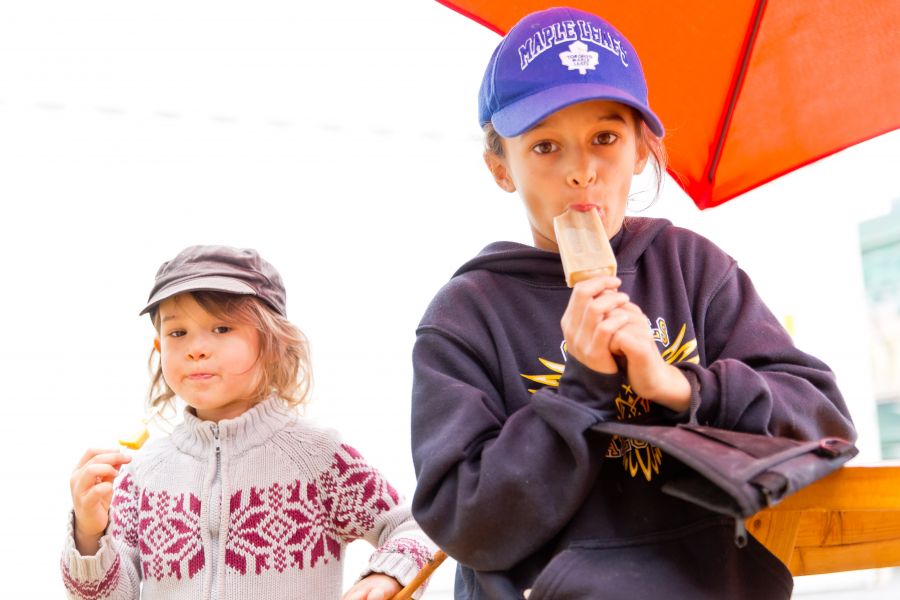