It closed Lakeshore Drive for much of the weekend. 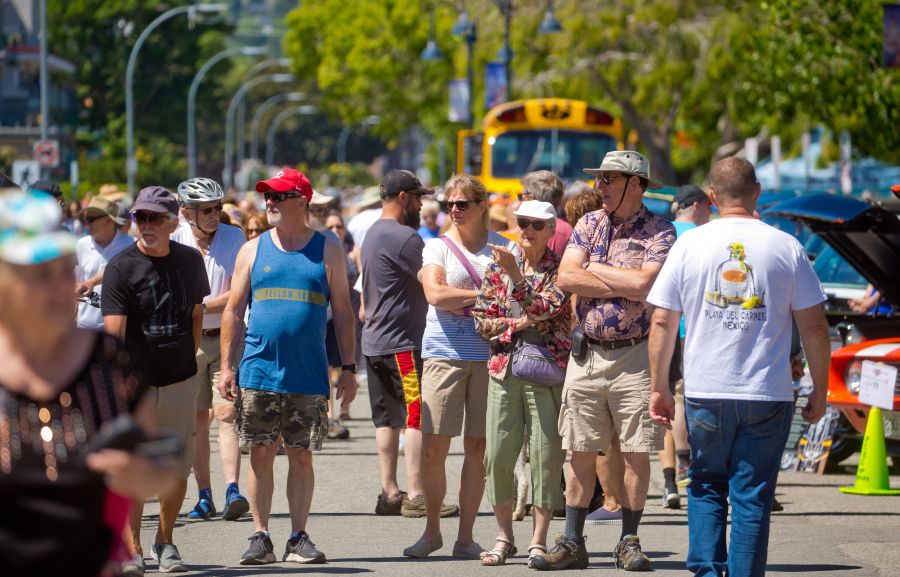 That's what happens when 750-plus hot rods and cool cars converge on Penticton for the biggest, bestest car show in the region. 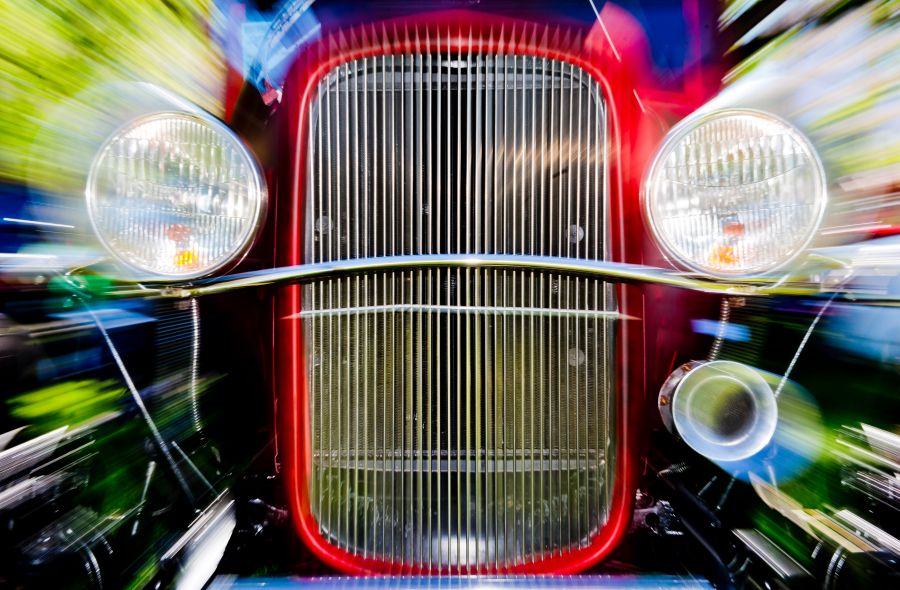 It's called the Peach City Beach Cruise and this was its first appearance since COVID stopped it cold in 2020. And judging by the sheer number of folks who turned out Saturday afternoon -- primetime for the event -- it was greatly missed. "For the most part," said long-serving Peach City Beach Cruise president Wayne Wood Sunday evening, "it was awesome. After two years of COVID, we had the team together again and hundreds and hundreds of cars showed up.

"And the crowds along Lakeshore were enormous. Both sides of the street and the sidewalks too. It was a fantastic show." There was, however, one potentially serious hitch. And as of Sunday evening, it's big enough that Wood is currently pondering the event's future makeup.

"There was one incident Saturday night where cars had started doing burnouts near the motels on Lakeshore," said Wood. "Our security person immediately shut down the road and called the RCMP. 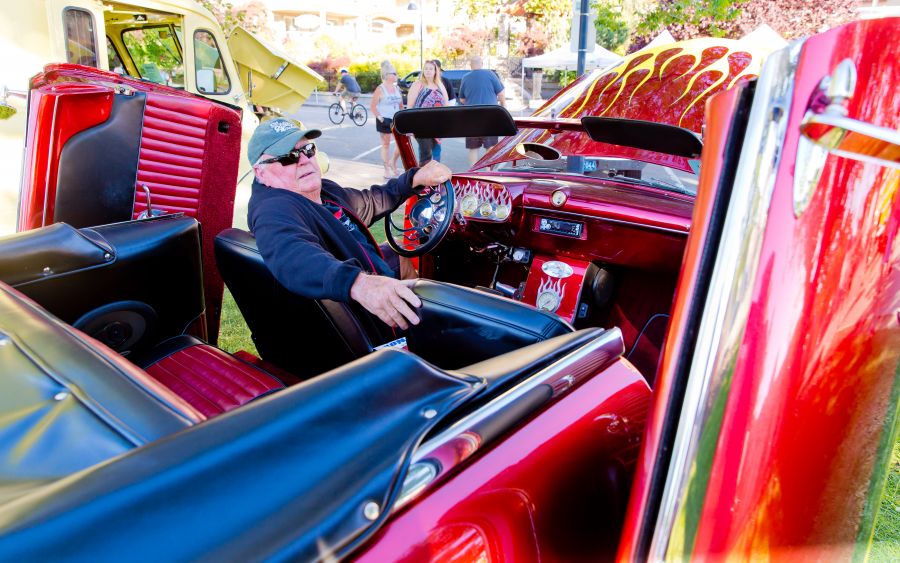 "And that would typically be the end of it. But this time, there was no RCMP that arrived until much later."

According to Wood, a "swarm of people" formed around the security person, berating and threatening him. He called the situation "scary." 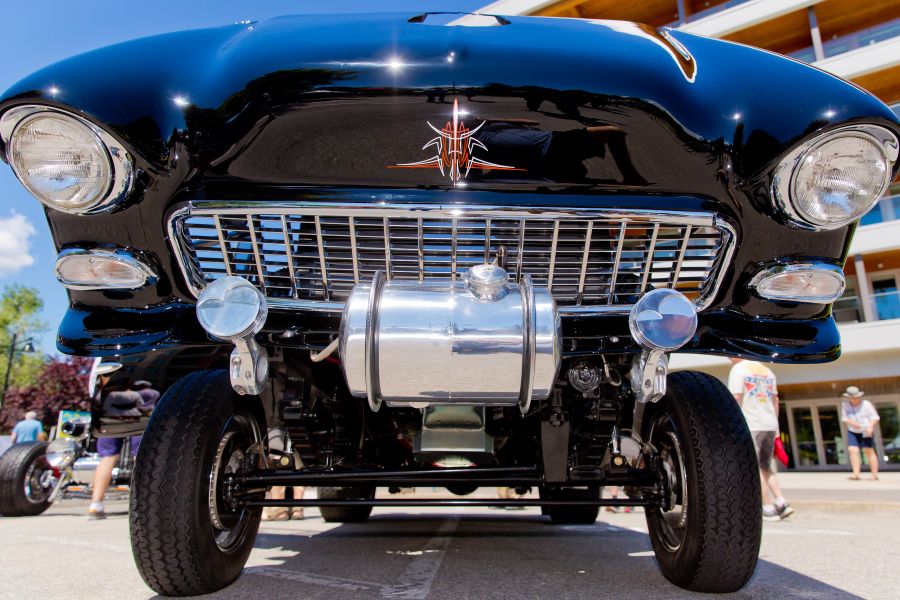 "Eventually though, some of the local car people attempted to assist the security person and eventually it did get calmed down. And that's when the RCMP car finally came.

"Our security person said it’s the worst he's ever experienced in many years of running the company. And he himself is ex-RCMP." 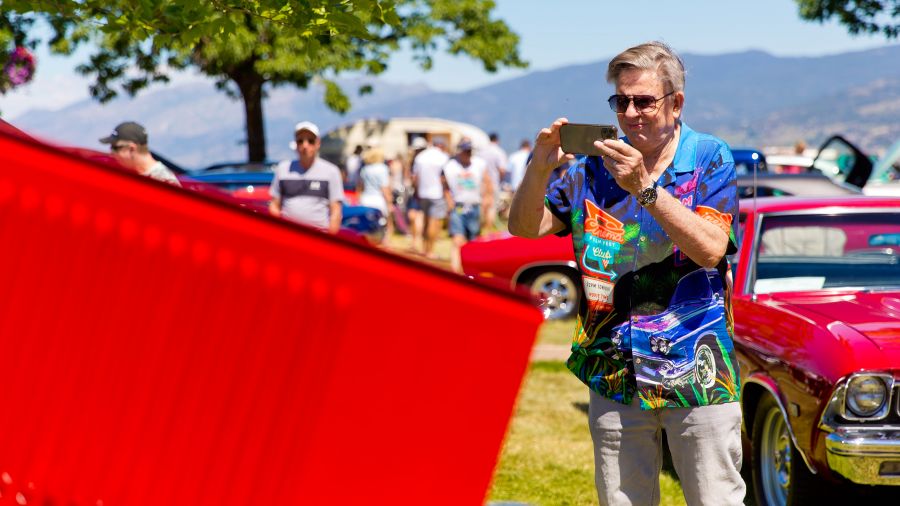 Wood said he's not sure as of yet who was responsible for the multiple burnouts, or how many of the drivers were registered Cruise participants. Nor does he know who "went after" the security guard -- the burnout drivers or the crowd egging them on.

Going forward, said Wood, there will be an assessment. 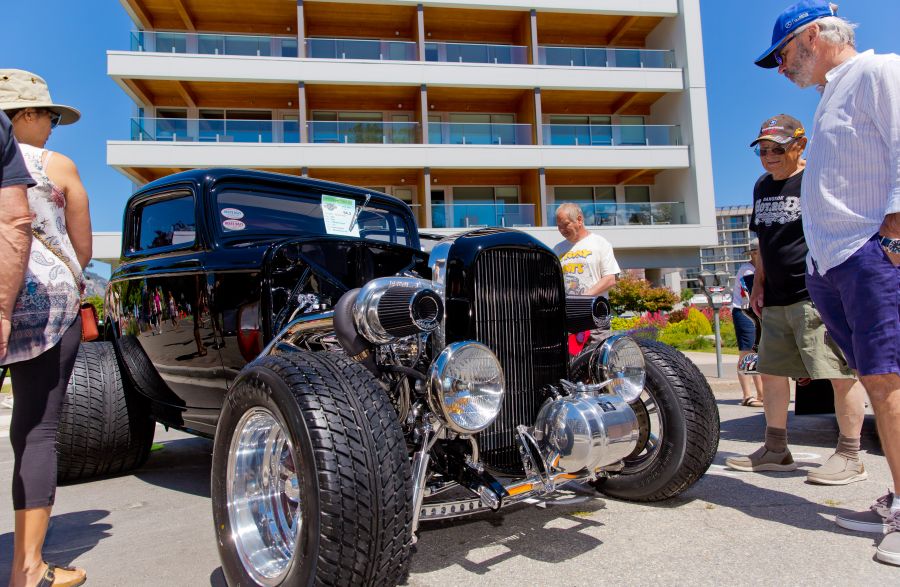 "There are directors who aren’t yet familiar with it," he said. "So we'll spend two weeks getting together and discussing what went well and what didn't, as we usually do. And then we'll hibernate for two months, and then we'll get together and decide what changes need to be made, who's retiring from the organization, that sort of thing.

"And at that point in time, a decision will be made." 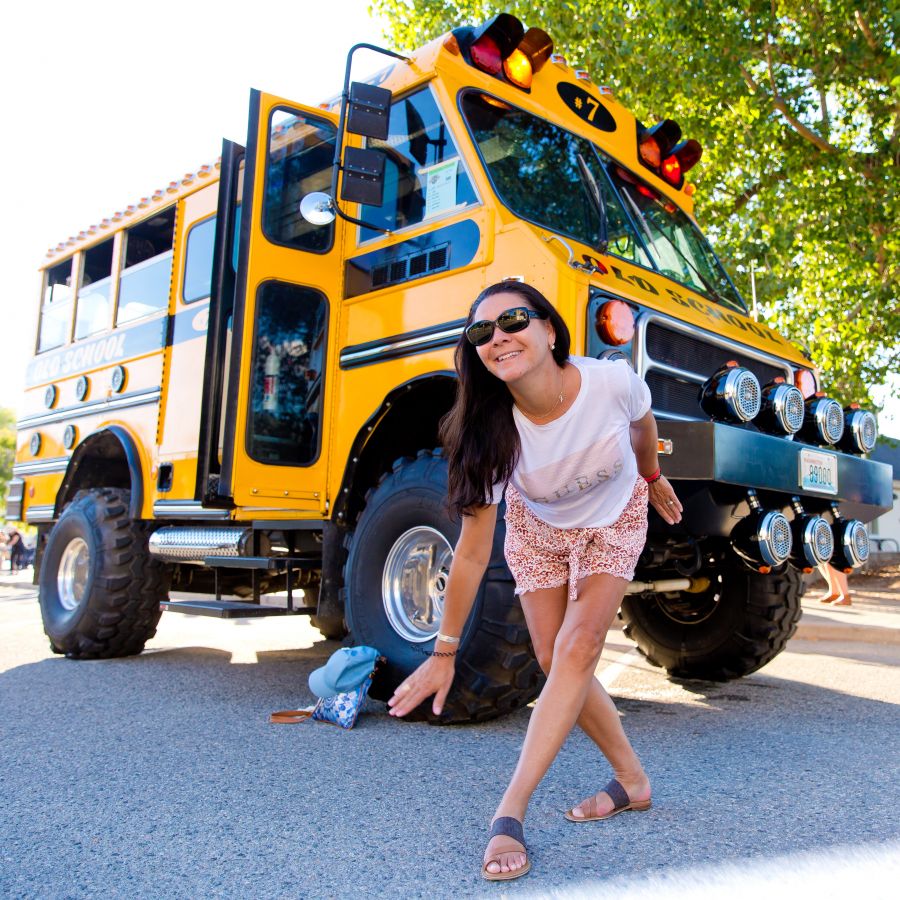 One would think Wood and crew would have a tough time radically altering an event that was otherwise this strong in its pandemic comeback year. There was no Friday night parade, but the crowds were huge, the vehicles compelling, and the Gyro Park HQ busy.

"We weren't quite sold out," said Wood. "We were missing some of our American cars because of the (border crossing) app. But the place was pretty stuffed." 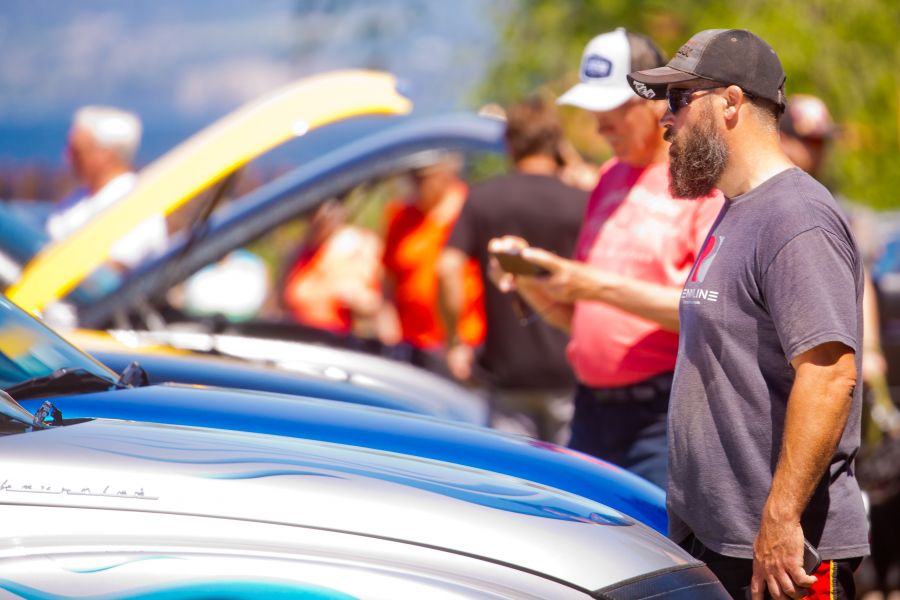 Evelyn Jacques of Penticton brought along her hubby and their 1928 Ford Model A pickup.

"We drive it every day," she said. "We come down to the beach and we sit here every night that it's sunny. "We've owned it almost ten years. We didn’t build it from scratch, it was originally built 25 years ago for Ben and Jerry's Ice Cream shops. And then it went to another person, and then we bought it from them."

John Bertram showed up with his rather extraordinary "Divco" milk truck. 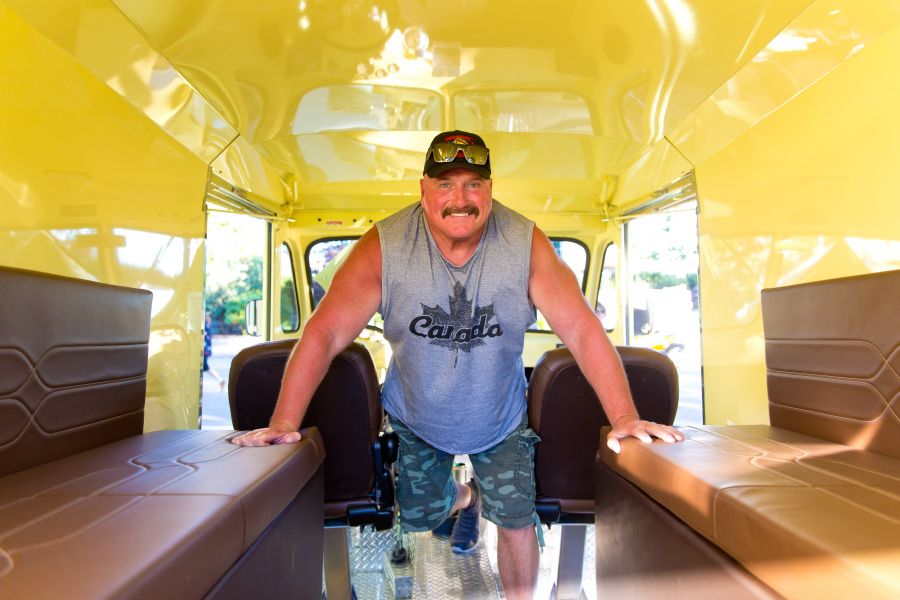 "It’s been chopped six inches," he said, "channeled, custom frame, '46 big block Chevy, custom air -- the frame lowers right down. I bought it with much of the work done and I finished it off.

"The guy I purchased it from, it was about three-quarters complete over the process of three years. I finished off the interior and did some other mods to the engine and transmission." 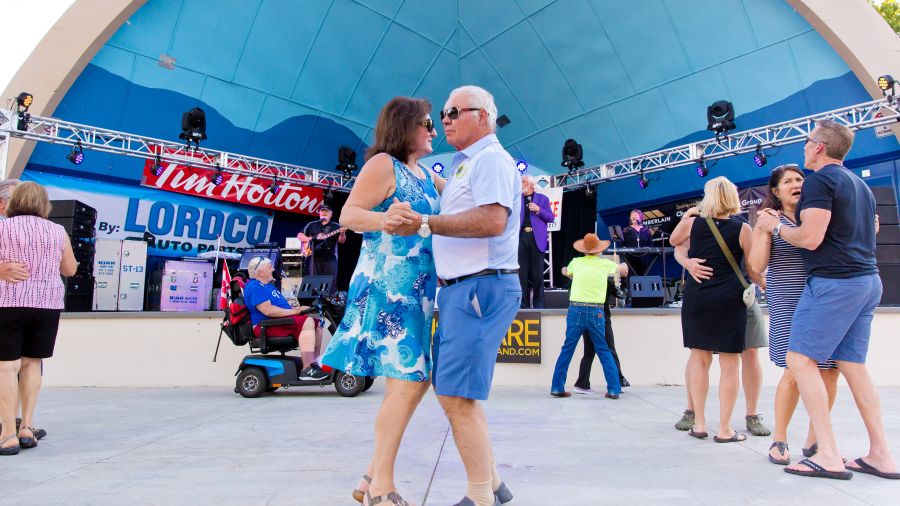 For more information on the Peach City Beach Cruise, hit up the website here or the Facebook page here. 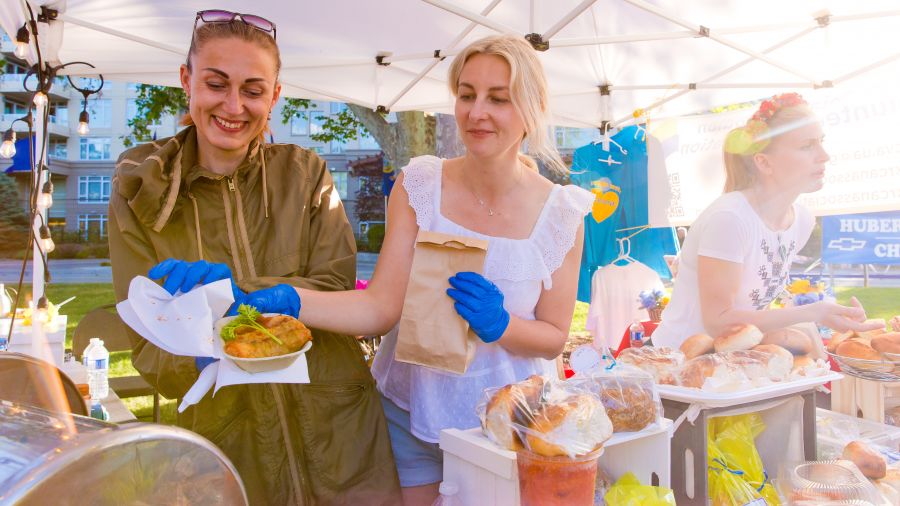