'This is the coldest we've ever had!' 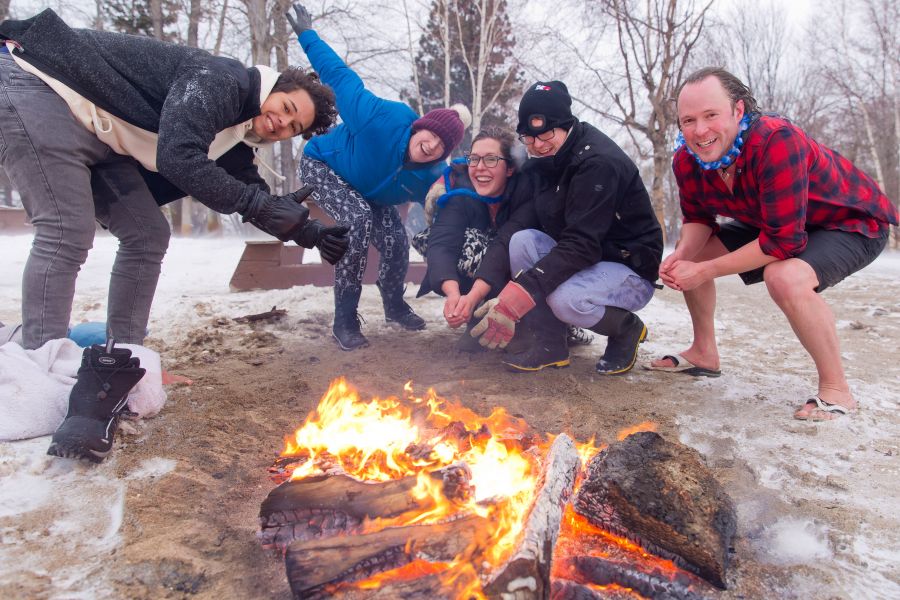 That was the frightening reality for the 36th annual iteration of the Summerland Polar Bear Dip held at noon today at Sun-Oka Beach. 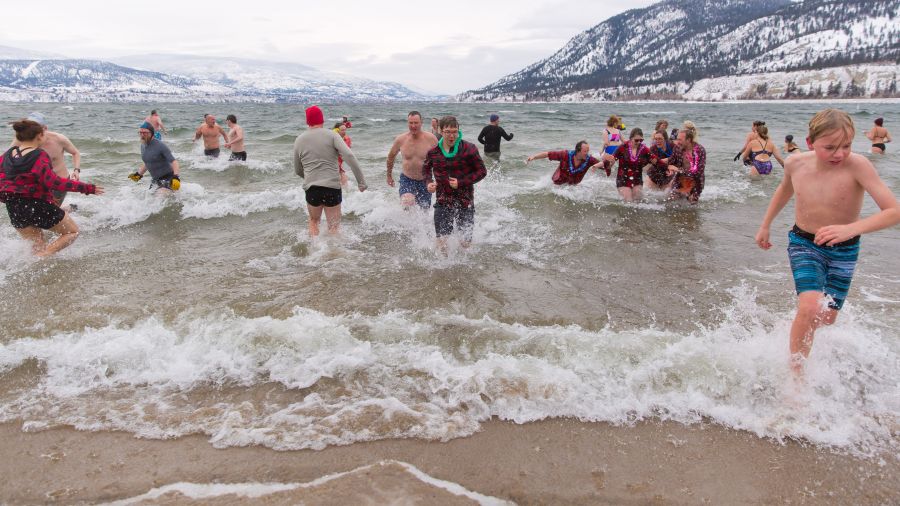 It's not overstating things to say it was bitterly, almost unbearably cold on the beach, where the wind smacked you in the face like a rotary sander.

This reporter doesn’t mind admitting his partially exposed fingers (needed to operate a real camera) were numb within a couple minutes. In just a half hour on site, I was forced to retire to my car and its full-blast heater twice. 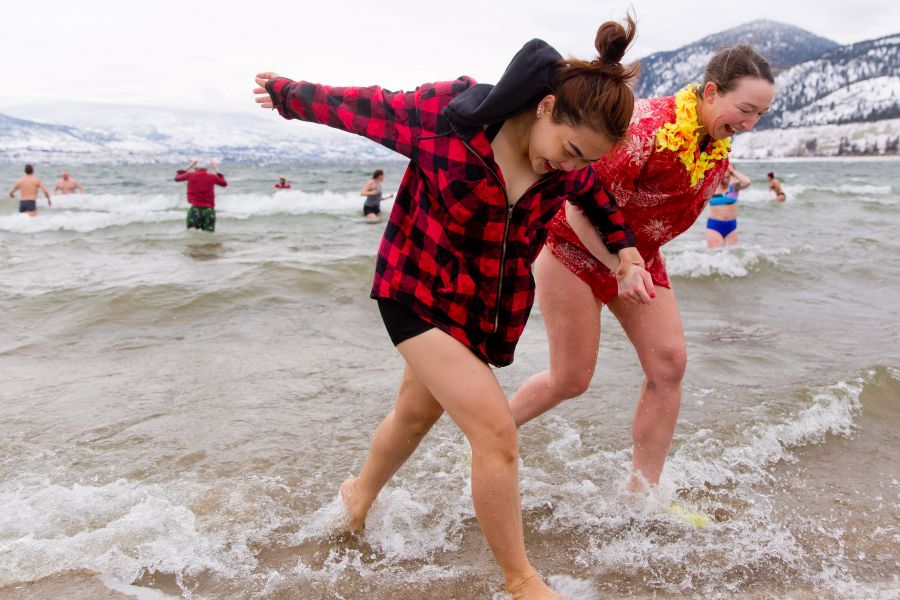 After it was all over, ten-year Dip veteran Jonathan Ziebarth of Summerland said it was "the coldest we've ever had."

"I honestly can't remember what if felt like diving in," he continued. "We were driving down here, listening to Metallica and trying to get ourselves psyched up. And then we got here and heard the countdown and then we just went. We just started running. It was crazy." 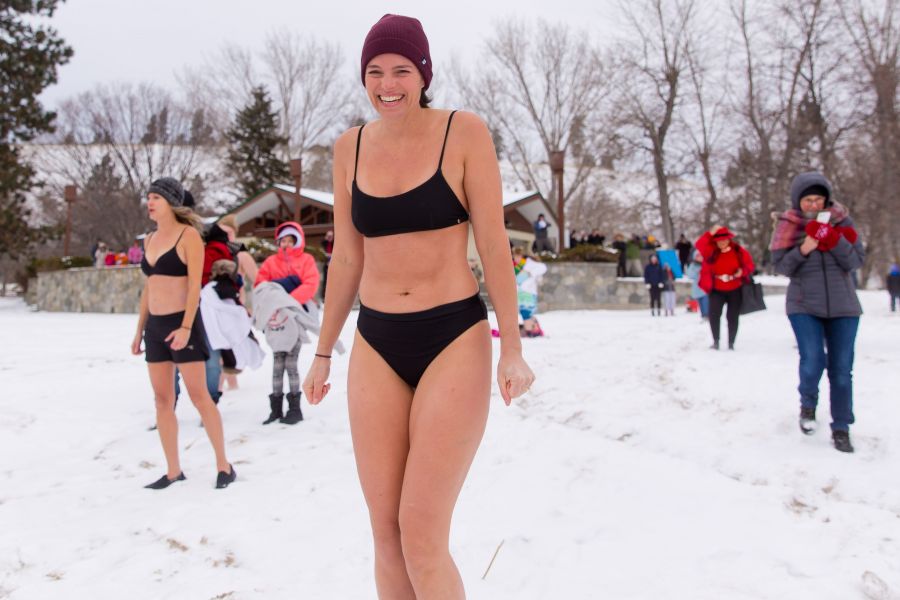 Ziebarth also had a message for COVID: "We're ready to live again."

Anne Benn of Penticton Search and Rescue, which watched over the event and later received a healthy $1,000 donation from Dip founder and organizing body The Kinsmen Club of Summerland, waded further into the lake then most participants and backed up Ziebarth's claims. 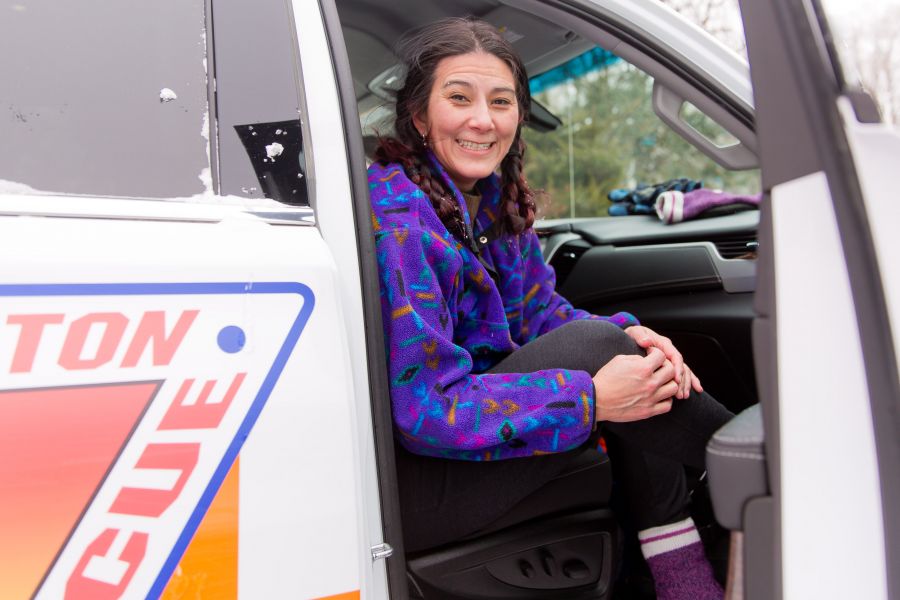 "It was great," she said. "It's excellent to see the community spirit come out. But it was cold -- the coldest I've ever been involved in."

Kinsmen prez Frederick Numsen, serving coffee and ensuring the event unfolded smoothly throughout, said there was never a serious question of canceling the Dip -- either due to the cold or the pandemic. 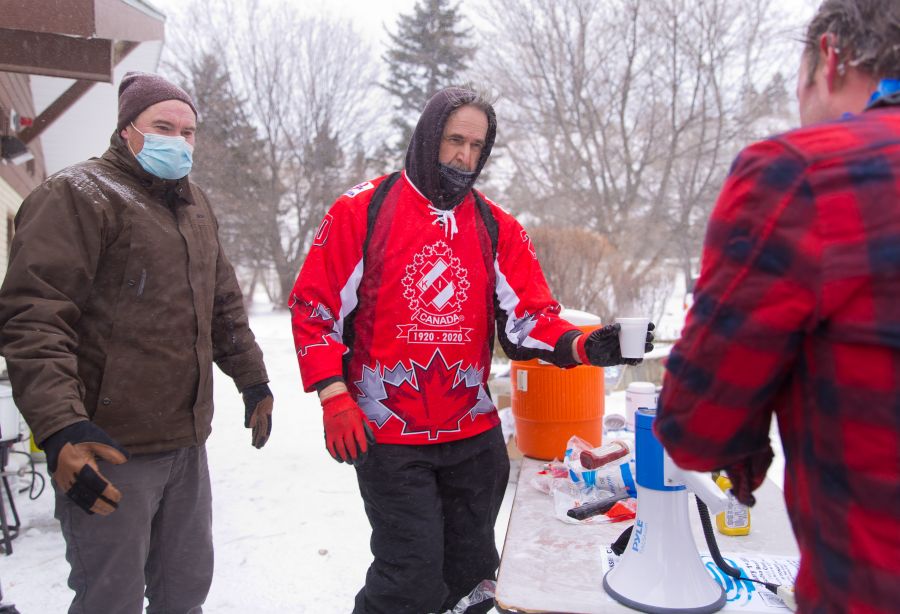 "When we started planning it months ago," he said, "we had to order food and shirts and all that. So we were committed to it early.

"And a lot of people canceled in other spots because their beach wasn't available for their dip (due primarily to beachside ice formations). But here it’s pretty good. The waves come in from the south and the trees usually block the wind. 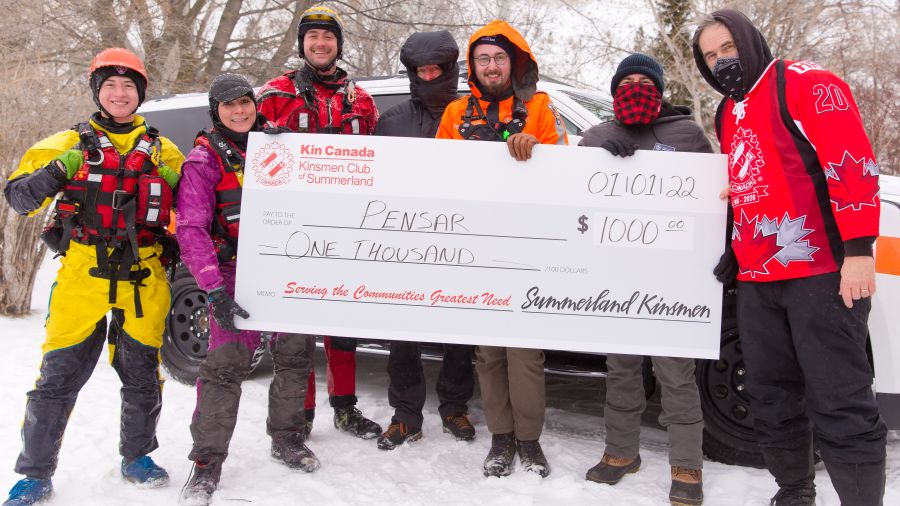 According to Numsen, the Dip has pulled in as few as five and as many of 500 in its 36-year history.

"I think today is about as cold as it's been," he added. "As for COVID, we can't do anything about it. We just need to be smart and live with it." 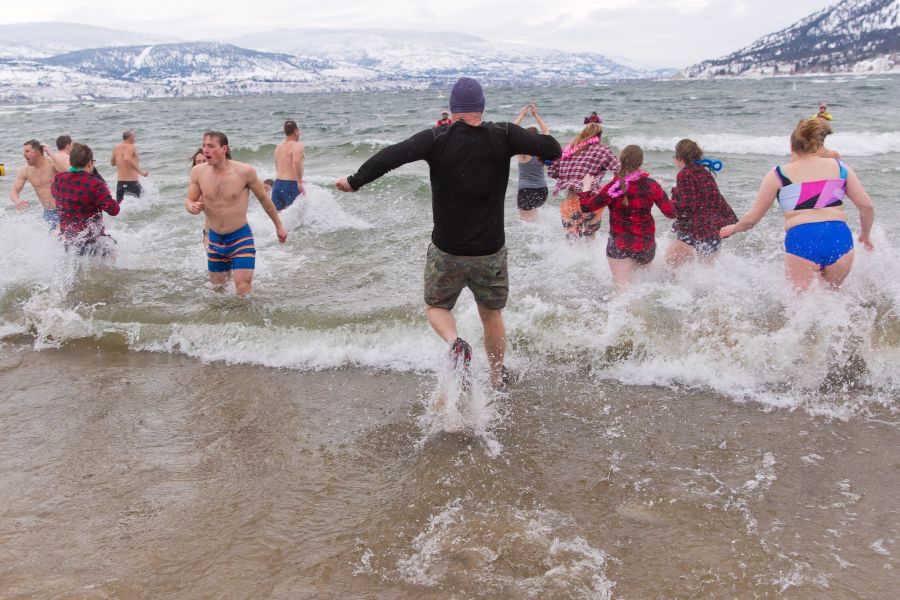 Other brave participants today included Penticton's Tracey Anderson, who moved to the Okanagan from Calgary 18 months ago and said beforehand that it's "a great way to start the year.

"This is my first time doing this, but I've been doing some 'Win Hof' (cold weather training) stuff. We’ll find out how bad it is when I get in up to my knees." 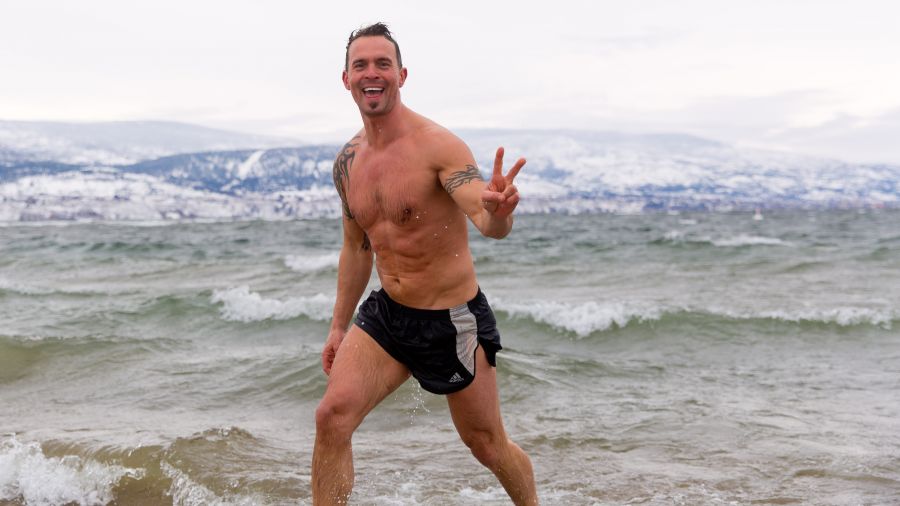 And Lynda Jones Layng of Penticton said she was partaking because for her and her pals, swimming in winter lake water is a regular deal. 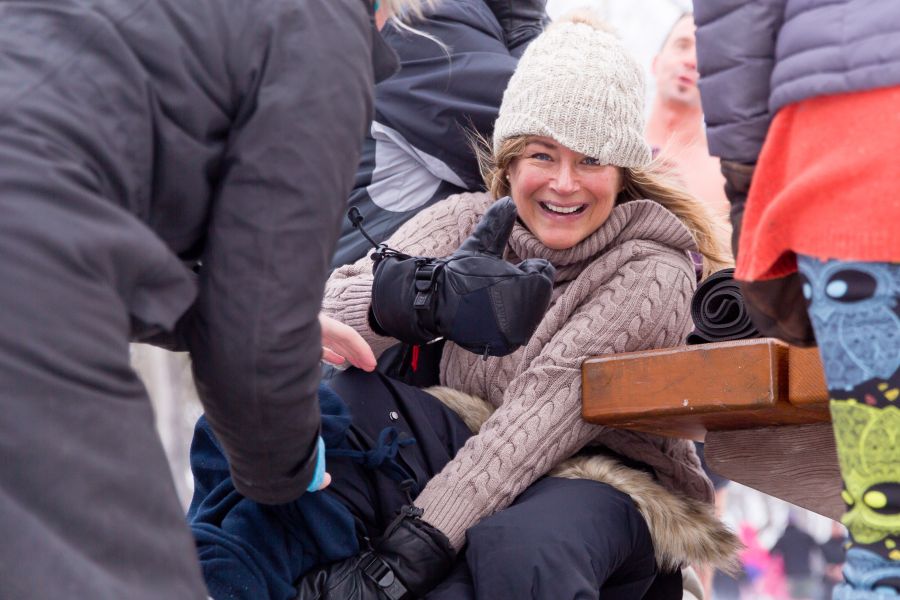 "We started doing winter swimming because of COVID," she said, "because the pool was closed. I haven’t been back to the pool since."

Catching a ride today with Jones Layng was Penticton's Noelle Rasmussen. A winter swimmer too, Rasmussen said it was her first Dip ever. She was a "little worried about the wind, when I get out." 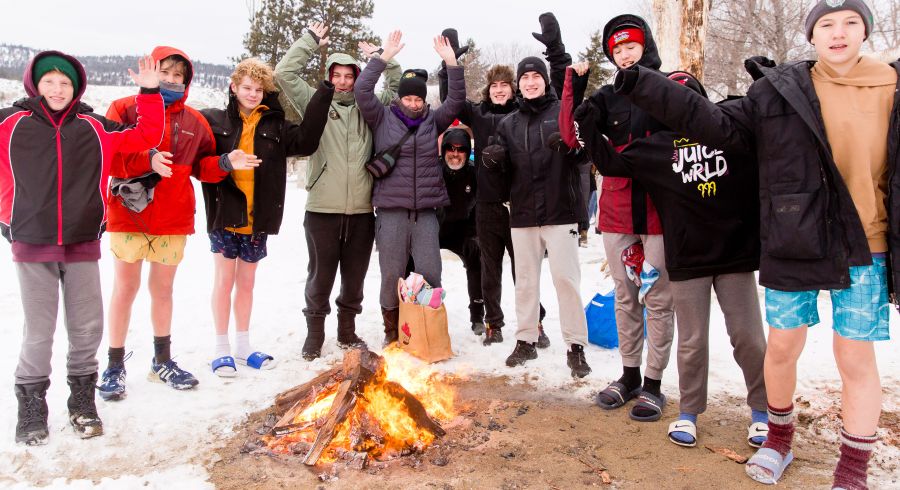 In the end, no one succumbed to the cold and there was a certain kinship between all the people who somehow managed to take the plunge. And the Kinsmen made some bucks for their good causes.

To join the Kinsmen Club of Summerland, head to the website here. 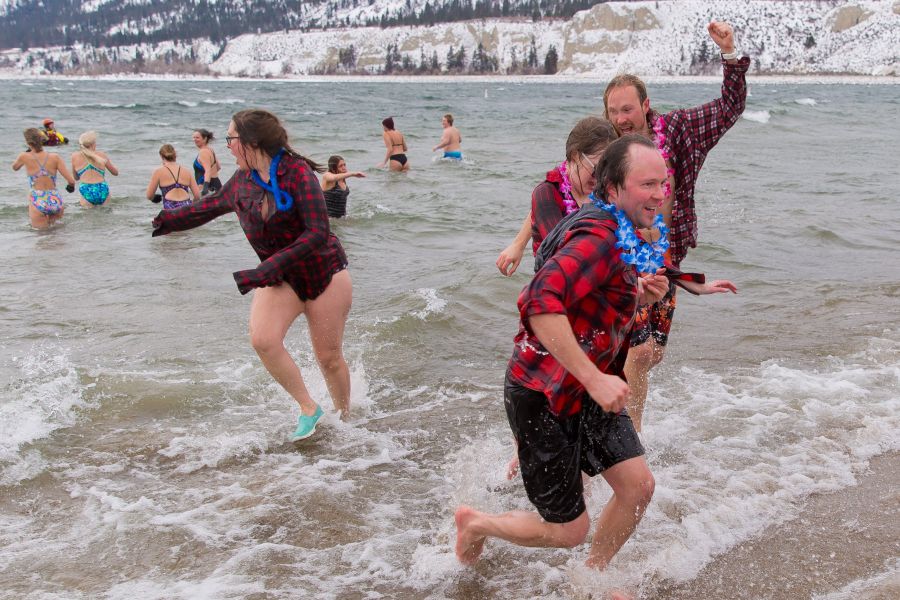 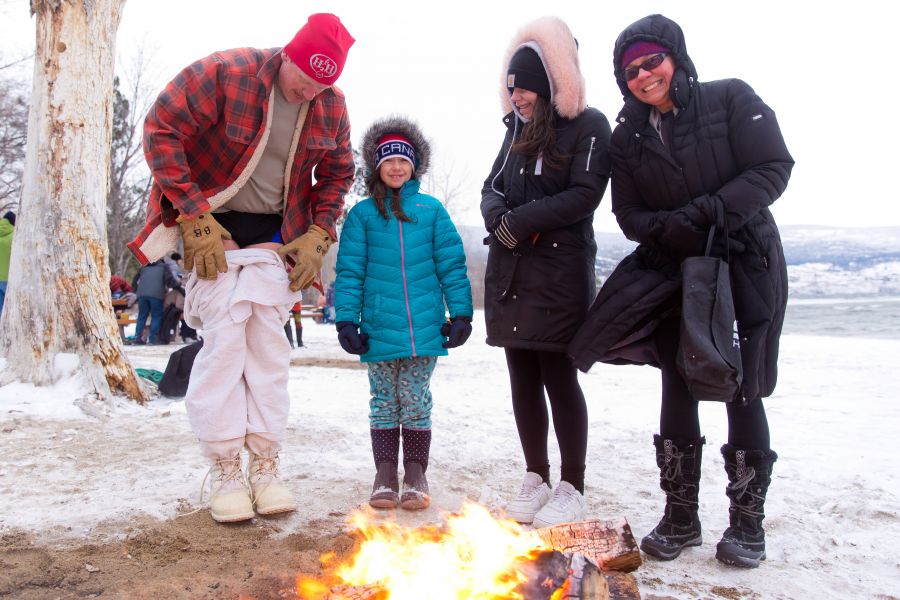 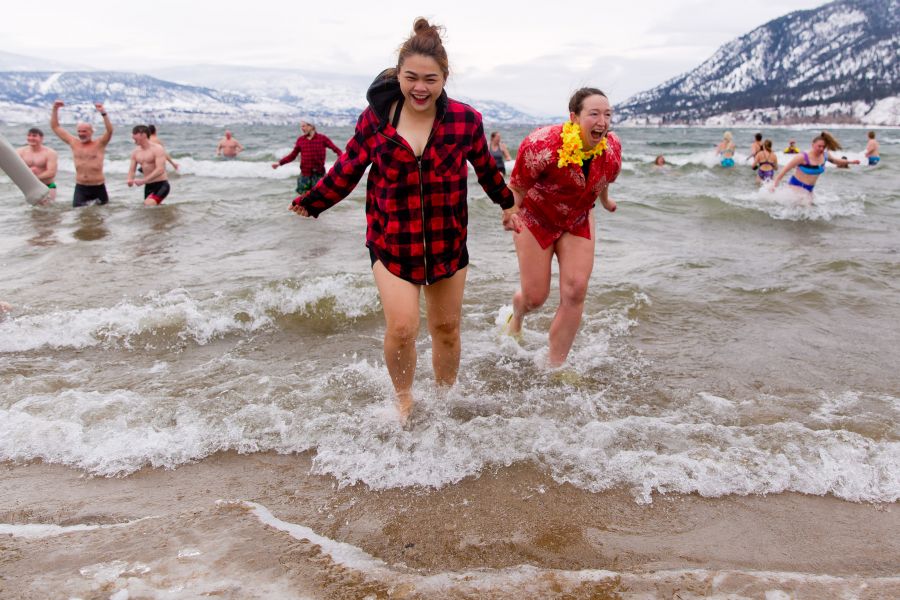