Mounties in the North Okanagan found plenty of people and plenty of drugs when they executed a search warrant last week.

The North Okanagan RCMP’s targeted policing unit executed the search warrant at a residence in the 2800 block of 40th Street in Vernon on Wednesday.

It was part of an ongoing investigation that began several weeks ago following complaints from the public about large numbers of people coming and going from the location.

Sure enough, there were 12 people inside when officers arrived on Wednesday. 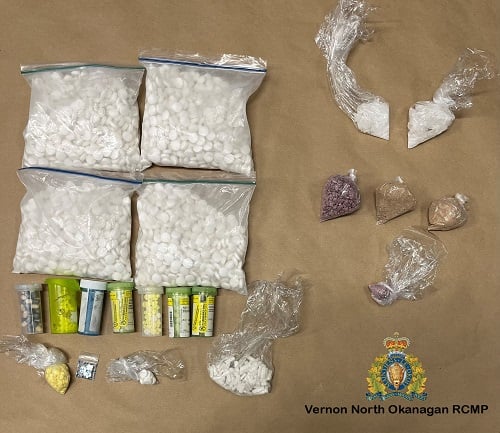 "Our investigators are seeing a dramatic increase in the number of prescription pills being found in the possession of drug traffickers, and the seizure of over 2,400 pills in this case is shocking and very concerning," said Sgt. David Evans.

Police said four people were arrested on Wednesday for a “variety of reasons,” including an outstanding arrest warrant, breach of release conditions and drug-related offences.

A 31-year-old man and 32-year-old woman were released from custody with a future court date pending and both are facing potential drug trafficking charges.