As the warming and drying trend continues, the fire is backing downslope towards containment lines on the north flank along the Nashton face, and at the west flank along Keen Creek.

Containment lines are situated on defensible ground that crews can safely access, and as the fire reaches these lines, ground crews will be able to safely use direct attack suppression strategies.

The type of timber at these lower elevations is less likely to develop crown fire, but as for the blaze in higher elevations, the timber type can be prone to more vigorous fire behaviour under certain conditions, which can make the fire more visible as it finds fuel.

Here is the latest update from @BCGovFireInfo about the Briggs Creek wildfire west of Kaslo: https://t.co/PFTeXwtYDL pic.twitter.com/YQI0vVLcb8

BCWS crews have been on site early every day and remain there into the evening, as they continuously monitor conditions to ensure they are aware of any unwanted growth.

Crews also remain stationed locally and are available for a quick response in the event conditions change, but light winds have been easy to manage for the time being.

At this time there are 24 firefighters and one helicopter on scene, additional helicopters can also be assigned to this incident to provide bucketing support if requested.

While wildfire management relies on a fleet of reliable and capable aircraft to assist firefighters on the ground, there are several incidents where the use of aircraft can have unintended negative consequences and be counterproductive.

Bucketing in steep terrain can wash burning debris downslope, sending the fire down the slope.

RDCK Information Bulletin - The winds over the weekend pushed the Briggs Creek Wildfire away from BCWS containment lines and the fire is continuing to exhibit smouldering ground fire behaviour. Follow the link for the latest information: https://t.co/7IYU61YGKQ pic.twitter.com/JtU1gr2dxc

In steep terrain with heavy fuels like the Briggs Creek fire, crews on the ground are needed to bolster the work being done by aircraft.

When crews are unable to safely access a fire, the chances of bucketing having a negative effect significantly increases.

“Public and responder safety is our number one priority, and this includes the safety of the pilots. Flying is a high-risk activity, and sustained bucketing at high altitudes significantly increases that risk,” said a release from BCWS.

“The significant safety risk to both fixed and rotary wing pilots, no structures being threatened at this time, and the possibility of negative impacts are why residents are not seeing aerial resources on this incident.”

Helicopter reconnaissance will continue to be focused along key areas of the fire – Kemp Creek Ridge, northeast and northwest corners - wherever the fire is nearest to containment lines.

The Briggs Creek wildfire is estimated to be 1,730 hectares just 11.5 km west of Kaslo, and an evacuation alert remains in place for properties on Kaslo Creek South Fork road in Electoral Area D.

(UPDATE: Aug. 14 @ 12:30 pm) – After more than a week, the BC Wildfire Service has recorded some growth on the Briggs Creek wildfire west of Kaslo.

Windy conditions are to blame for the growth.

“The consistent winds on August 13th pushed the fire away from our containment lines along the east and north flanks,” explains the BCWS in an update on Sunday.

“As forecast, strengthened winds and elevated temperatures did increase smoke and fire behaviour compared to recent days; however, crown fire involvement was not observed.”

However, sections of the fire are approaching old cutblocks and a series of roads which will act as fuel breaks.

Patrols are ongoing on the northeast corner while mop-up continues on other flanks.

There are 10 firefighters and one helicopter assigned to this fire.

This continues to not be an interface fire, however, an area restriction is in place. For more information, click here. 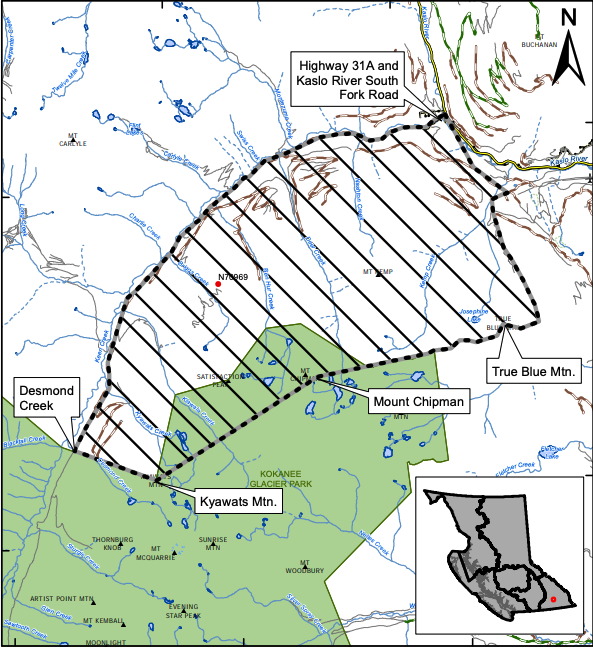 The BC Wildfire Service says the lightning-caused wildfire continues to not threaten any structures and remains estimated at 1,679 hectares.

On Sunday, there are 14 firefighters on site with the support of one helicopter.

However, it continues to be very visible to Kaslo and surrounding areas. The agency says fires tend to look closer or bigger at night because of the glow they emit in the dark. 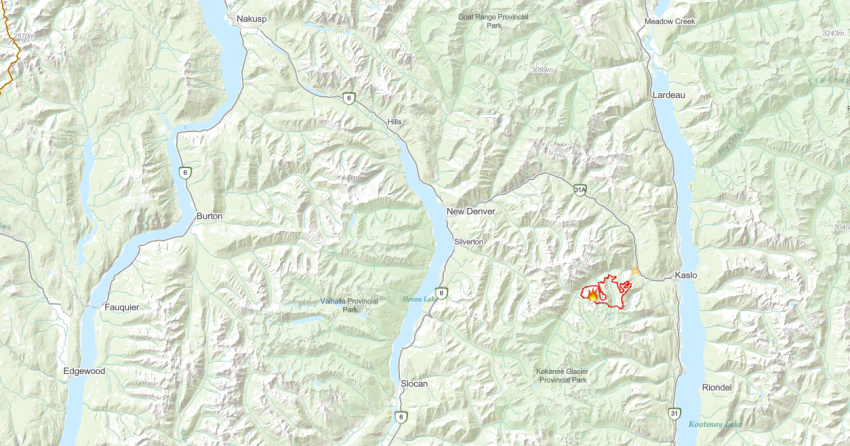 Additionally, the agency says the wildfire continues to burn in a desirable area and is not threatening containment lines.

This fire "is primarily displaying characteristics of a smouldering ground fire with a desirable slow rate of spread,” explains the latest update from the BCWS.

“We are anticipating that forecasted seasonal hot and dry conditions will result in the fire exhibiting some higher intensity pockets of fuel consumption.”

At this time, the fire continues to burn at higher elevations in steep terrain and has been met with a change in fuel type that is not burning as easily.

An incident commander is on site to monitor any unwanted fire growth and personnel will maintain a constant presence to act accordingly if the fire does begin to grow when temperatures increase later this week.

(UPDATE: Aug. 4 @ 6:15 PM) - Over the past few days the Briggs Creek wildfire hasn't seen any sort of significant growth.

A more accurate track of the perimeter has measured the size of the fire to 1,680 hectares.

At this time the fire continues to maintain its position high on the slope, while it has moved down slightly it has been met with a change in fuel type that is not easy to burn.

The fire remains very visible to the town of Kaslo and surrounding areas, and in the evening hours, the fire is magnified by the darkness and may appear closer than it is.

The Regional District of Central Kootenay has implemented an evacuation alert in the vicinity of this fire, and more information can be found here.

There are currently nine firefighters on the scene, along with one helicopter. With the fire burning in step, and unworkable terrain, heavy equipment isn't needed at this time.

It is estimated that the fire is 11.5 km west of the town of Kaslo. The Regional District of Central Kootenay (RDCK) has implemented an evacuation alert, for many properties on South Fork Road in Kaslo.

It is moving fast at a high elevation away from properties and into the remote areas of the Kokanee Glacier Park.

Currently, 29 firefighters are on scene, with a 20-person crew en route.

Because of the steep terrain, direct attack of the fire is challenging and inaccessible.

Ground crews are working on establishing control lines in operable ground that will provide a safe, defendable space to carry out suppression activities.