Merritt wildfire considered 'out of control' after nearly tripling in size

(UPDATE: April 6 @ 4 pm) - BC Wildfire Service is reporting that the Quilchena Creek wildfire has grown to 839-hectares from the 300-hectares confirmed on Monday.

Located 20 km east of Merritt, the blaze is still considered out of control and is believed to have been human caused.

"The fire is predominately burning in grass fuel types and open range topography with a few sections of the fire burning in some steeper draws," said information officer Nicole Bonnett.

"There are 27 personnel on site and with aerial support from a helicopter for gear moves and water delivery."

The BC Wildfire Service is continuing to respond to the Quilchena Creek wildfire (K60064) that was initially reported on...

Posted by BC Wildfire Service on Tuesday, April 6, 2021

The fire is not currently threatening any structures.

(Original Story: April 5 @ 4 pm) - It appears the wildfire season in the BC Interior is starting sooner rather than later this year.

BC Wildfire Service is reporting a pair of new fires have ignited near Merritt.

The first wildfire is located in the Quilchena Creek area and is an estimated 300-hectares in size.

It's believed the blaze was sparked by human activity. 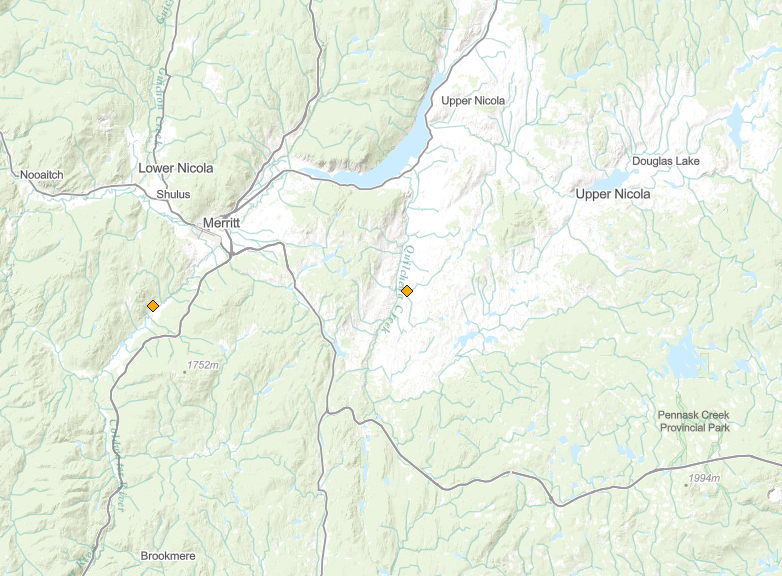 A second fire has ignited in the Coldwater area southeast of Merritt and currently estimated at 50-hectares.

The fire is also believed to have been human caused.

According to the BC Wildfire dashboard, nine of the 11 wildfires currently burning across the province are located within the Kamloops Fire Centre.