The government of B.C. has declared a provincial state of emergency in response to the province’s ongoing wildfire situation.

Mike Farnsworth, minister of public safety, made the declaration today based on the recommendation from B.C.’s wildfire and emergency management officials.

Given the current #BCwildfire situation and the expected increase in wildfire activity, the Province has declared a provincial state of emergency. Read the full release from @EmergencyInfoBC here: https://t.co/MyctLl5wez

The state of emergency will initially be in effect for 14 days and can be extended or rescinded as necessary.

It applies to the entire province and ensures federal, provincial and local resources can be delivered in a coordinated response to protect the public.

"Public safety is always our first priority and, as wildfire activity is expected to increase, this is a progressive step in our wildfire response to make sure British Columbia has access to any and all resources necessary," Farnworth said.

"Taking this step will further ensure we can protect the public, property and infrastructure, and assist with firefighting efforts."

As of Tuesday, there were 566 wildfires burning in B.C. with 29 evacuation orders in place affecting around 3,050 people. 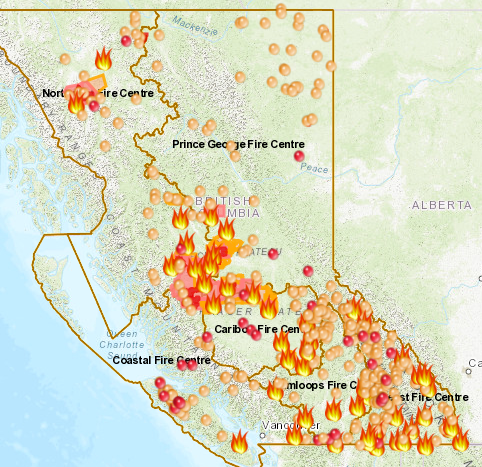 There are also 48 evacuation alerts that have 18,720 people across the province ready to leave their homes at a moment’s notice.

Nearly 3,400 firefighters and contractors from B.C., the rest of Canada, Australia, New Zealand and Mexico are battling blazes in all fire regions of the province.

With the extended weather forecast calling for continued hot and dry conditions, as well as a risk of thunderstorms in some areas, things could get worse before they get better.